Papa Roo on the mend 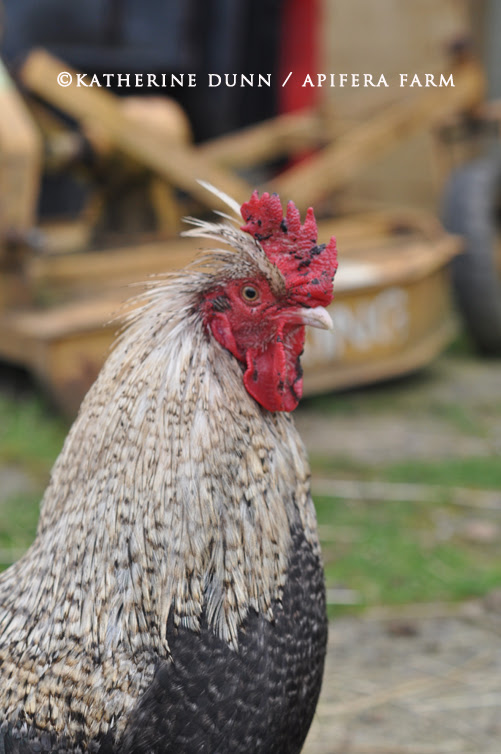 About a week ago, as I was putting the barnyard to bed, I found Papa Roo in the goat barn, huddled head down in a corner. Not a good sign. Chickens will go into almost a death position when they are sick. I've seen them recover, or not. When I saw his mass of feathers in the corner, I let out a sigh of, "Papa Roo..." thinking he was dead - he is after all over ten which is a good old age for a chicken, especially a rooster.

But I picked him up - another sign of how sick he was, as Papa has never tolerated being caught or held - and saw his whole head in blood, and all his beautiful neck feathers soaked in blood. When a chicken has been pecked or attacked on its comb or red waddle, huge amounts of blood come out.

Having been through it, I remained calm - which wasn't the case the first time I cleaned up a rooster attack. It's very hard to tell where the worst wounds are on a bleeding comb, but he had several huge tears. I cleaned him with warm water and doctored him up, and hoped for the best but expected the worst. I enclosed him in the Old Man Guinnias suite for the night - or so I thought.

I saw Chicken Jack on the way back to the house ad saw he had some blood, not much, so he was obviously the winner of this rooster pecking order challenge.

Arriving the next morning, I peeked in the stall, prepared for a funeral. But...no rooster. My heart sunk as I thought a coon might have snuck in there and got him, but there was no sign of distress. And then I heard a muffled rooster crow.

I searched each stall thinking maybe he was under hay and was too weak to get out. I went on with feedings, perplexed as to where he was. Sound travels oddly out here due to the coast range and the way the barns are situated within hills.

As I walked to the sheep barn, there he was, crowing near the hen house. Inside the coop was Chicken Jack, crowing too. They were not done with their disagreement. I was pleased though how strong Papa looked and the gushing blood had stopped. Chickens love blood and will peck at a wounded chicken for the red protein so I was concerned where I could put him for the day. I decided to get it over with and let all the chickens out, and Chicken Jack. Chicken Jack is about three and has been no problem here, he has always deferred to Papa Roo who has been here for a long time and has always been the patriarch of the hen house. But just as a young ram can turn into a different personality at two or three, I've seen roosters do the same thing.

It's the changing of the guard.

Chicken Jack came out with his fighting gloves on and the two roosters came together right away. I broke them up immediately before anything happened. I decided to sit in the barnyard for a half hour or so and commune, and watch the two roosters. It was obvious that Chicken Jack had won the first battle, and was now positioned higher than old Papa Roo. The hens - even the original hens who came with Papa, were hanging out near Chicken Jack, whereas they used to avoid him. Kind of sad, but it is the way of the barnyard.

Papa Roo seems to have mended up well. Papa now sleeps in the hut with the girls while I have Chicken Jack sleeping in the goat barn with Stevie, and whoever else decides to sleep in the Old Man Guinnias suite. I find it amusing to see how the goats go through periods of sleeping in one spot, and then move to another for a period of time.

During the day, so far, the two roosters seem to be staying out of battles. I will hope for continuing rooster tolerance, but the barnyard - just like the back woods or the river bottom - has its own laws that I am not in control of no matter how I might think my interfering will help.
Posted by Katherine Dunn/Apifera Farm at 10:58 AM

Very interesting! I hope Papa heals! THanks for sharing.
Erica :)

I am on Papa Roo's side. He is beautiful. I hope it works out. I see your works everyday on FB, and I am in awe. One day soon I am hoping to be brave enough to start to paint again, you inspire me so.
I am fascinated by the barnyard stories you tell, and your way of life, so real, very moving, I appreciate it and admire you immensesly.

I am optimistic...Papa has had a long life no matter what. Sometimes the wounds appear heal, but they die soon after, I've seen it- but he seems strong and active. Sharon, very kind of you...be brave! What will hurt you if you try, alone in your room, to paint....