Update on the elder ponies 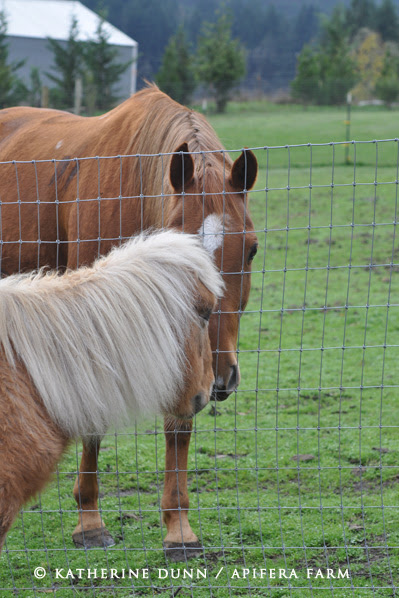 The vet came on Friday to work on the teeth of Mama Sugee and Wilma. Equines need to have periodic 'teeth floatings', where the vet grinds down any sharp points or uneven areas. This allows the animal to chew properly, and also makes their life more comfortable, so they don't have a tooth sticking in their gum or tongue.

Unfortunately, Sugee's teeth have never been worked on - or not for many, many years. When the vet opened her mouth, she was a t a loss how to start. Sugee's teeth were so horrible - some had fallen out, others were very long and growing into her cheeks leaving 2" raw, open sores. Some of the teeth were worn down to the nub. The vet had to take as much off as she could so at least they were making more pain for her mouth, but she couldn't get them even and we never will at this point. This means Sugee will always probably spit out some of her hay as she can't grind it down properly, and I will always water-mash her grain.

I'm so glad she will have relief though - the sharp points are gone and won't create more wounds. Wilma didn't need any work, so that was great.

I was really happy when the vet– who originally rescued these tow old gals and was the vet who operated on Sugee's ears after the dog chewed them off– told me how pleased she was to see Sugee with so much more weight on her, and they loved that Wilma was up and about. Wilma was so fat and sore from bad feet she couldn't even get up when they got her.

I have been working on Wilma's attitude. She is not mean spirited, she just doesn't have ground manners. She is learning that she needs to stand still, with her ears relaxed, not pinned back, to accept hugging. And when she relaxes those ears, she's figuring out it's okay and feels good to get petted. She is also learning to stand still after being released, rather than rushing off in a huff. The new pony paddock is next to Boone, and it is so sweet, if not amusing, to see the two old gals flirt with Boone, who nipples on them when they are in heat.

If you'd like to make a small donation to help me maintain the elder ponies and all the other Misfits, I'm very appreciative. There are gift levels, including a copy of the new book, "Misfits of Love". 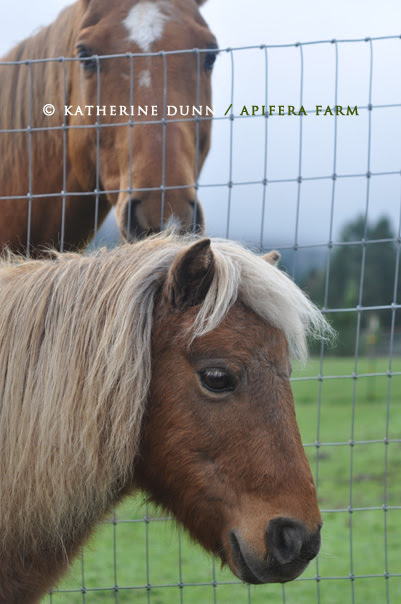 Posted by Katherine Dunn/Apifera Farm at 11:05 AM