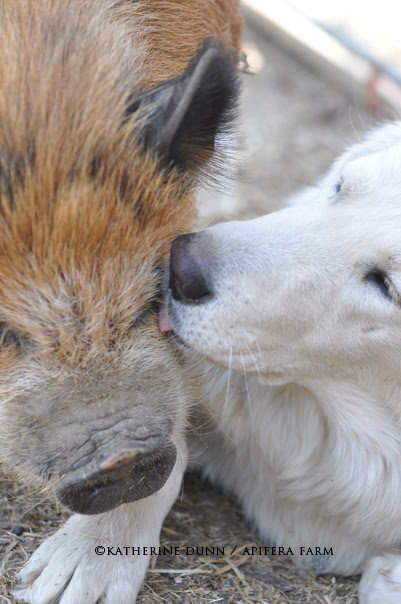 Cue the spooky music.... last night about 11 PM, Marcella showed us she knows her job.

Now this particular Marema does not bark, unless she needs to send a clear message. She once barked once, then twice, slowly and I knew to check it out-and a piglet was caught in a fence. I have heard others say their Maremas bark a lot, and others who say their dogs are like Marcella-that when they bark more than a few times, you better go take a look.

I had gone to bed at 10:30 and was contently dozing off, and I had the fan on. I heard a dog but thought it was the one across the river who tends to bark a lot. Martyn came in about 11 and he said it was Marcella. He was nonchalant about it. The barking continues and I got my old self out of bed and we took flashlights out into the dark barnyard.

Now night time belongs to the creatures, I've always felt more like a guest of the barnyard than the shepherdess at night. We entered through the orchard where Aldo the llama, and his goats reside–Stevie, Scooby Keith, Raggedy man, Rudy and Professor Otis Littleberry. Adjoining paddocks there have the older ponies and Doris and June and all the piglets.

To flash your light into the dark and come upon different sets of golden eyes, all shining calmly at you at various heights is both unsettling and amusing, especially when your guard dog is sitting upright, at attention, looking straight into the pony paddock, barking.

I must say, to come upon Marcella, so white, sitting so still and strongly, attentive, was a beautiful moment. It made getting up out of a slumber in pajamas and sandals worth it. I looked into the dark pony paddock and could see in time that the two elders were near the gate, and all was well. But Marcela continued to bark.

And then I saw it. A brown mass, short and squat. Motionless, standing closer to Doris's stall.

Now this is a ridiculous question- if it had been a wild pig, all hell would have broken out and it would have been horrible. Wild pigs are...wild. And very fierce and destructive-but there are getting to be a lot of them for a lot of different reasons.

"No, it's not...is it?" I said. He looked brown, and he seemed so out of place, which he was. I called for him, and once I got my bearings I understood that yes, in fact, it was dear Earnest-and he was making love calls and actions to the ponies–one of them must have been in heat.

The entire time, Marcella stood her ground and barked, until I went in and talked to Earnest, and managed to chase him out of the pen and back to his barnyard, with Marcella helping.

I praised that dog to high heaven. I realize it wasn't a life threatening situation, and if I hadn't gotten up, chances are Earnest would have cozied down with Marcella and the goats and she would have subsided her barking. But I was just so pleased with her, keeping her Misfits in check. And I got to hear her bark and the tone of it for a non life threatening situation-perhaps some night it will be a more aggressive bark, and I will understand her call is more serious.

I really think it was a turning point.

"Now do you know what I mean that when she barks, there is a reason?" I asked Martyn as we walked back to bed.

He did. And then my flashlight shone on two sets of beady, bright eyes, one set was about a foot off the ground, the other slightly taller. A visitor would have assumed raccoons. But I knew it was Moose and Goose observing from the backdrop. 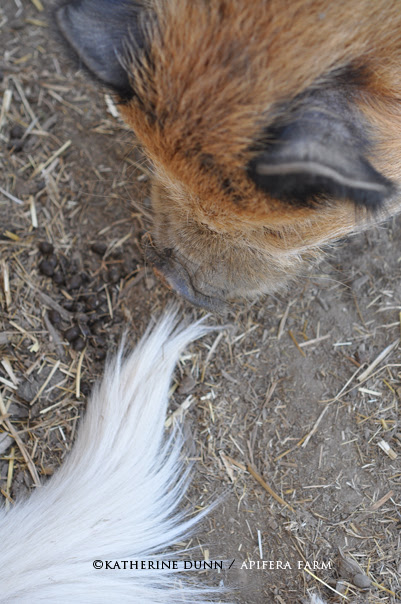 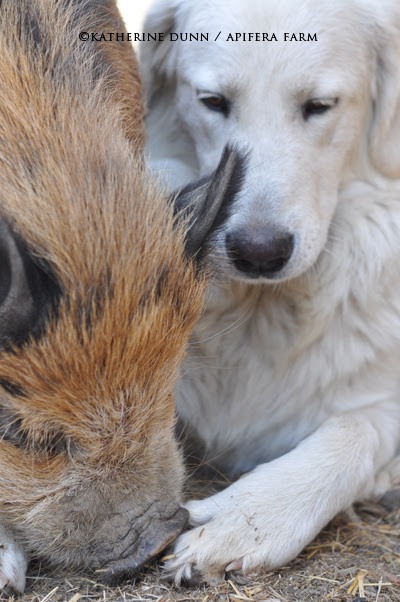 I always love hearing what's going on at the farm. A night time story is a real treat. Marcella is a wise, old soul. very pretty also!

I LOVE your blog. Thanks for sharing such heartwarming tales.

Warm regards and Peace to all,
Barb

Great story. Marcella, what a gem she is turning out to be. xox