I will surely miss you, Floyd 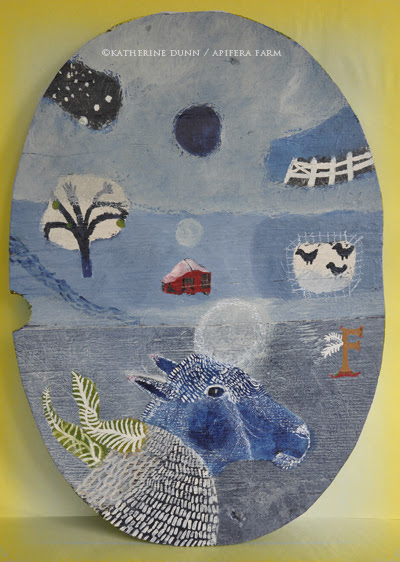 I said good bye to my soldier today. Floyd began to show real signs of pain on Monday, but the pain meds seemed to help. What complicated my decision on how to proceed was he was eating, drinking [with my help] and although he couldn't get up on his own, he could stand with my help. I heard a lot of stories about animals recovering from being cast for days, or weeks. But they weren't old, and I knew in my heart even Monday what was coming.

Yesterday, I knew I had to help him move on. Sheep can be very stoic in sickness and even though he was still sort of eating, he was making more sounds indicating pain. He couldn't stand or even right himself with my aid. He had fought hard for six days and was tired, his lungs were probably filling, or eventually they could have collapsed. I have watched sheep die while being kept comfortable, and I've watched them die quickly in a death spiral-the latter is no fun to witness and leaves you helpless. Floyd's decline and signs of closing down were unusual for what my experience has been in eleven years of caring for elders and sheep, and it is one reason I have been guardedly optimistic these past days.

I had a restless night, but Floyd probably had a difficult time too, which was part of my restlessness thinking of his suffering. There was only so much pain meds could do. I could not get any of my regular sheep vets out yesterday, so one of my local equine vets was good enough to squeeze me into her farm calls today. I was so grateful they helped me out in a jam.

Yesterday, I felt off kilter all day, because I knew I had to wait a day for him to be put to sleep. I did what I often do, I created a farewell painting in his honor. I told him all about it, that he has rivers and sounds that he will recognize as home. I gave him wings not so he could fly, but so he could stay lifted up on his own free will. I finished it right before the vet arrived.

He passed very fast. He was worn out. So was I. But what a soldier he was! I told him again what an exceptional creature he was and though our time was short, I was just so glad I was able to give him a final home. He will be buried in the pumpkin patch along with many other Misfits. The barnyard and I will have a private burial tomorrow.

But let me tell you about Floyd and why his short time here will always be worth remembering with love.

I nicknamed him "The Couch" because he was...well, kind of like a couch. He was my shadow in the barn, moving right along with me, making sure he positioned himself right at my side. He came up past my navel and was a huge sheep. But his antics were never that sheep like. He was more like a dog. A dog couch. He truly seemed to adore me, and he just liked being with me wherever I was. He wasn't pushing around my pockets for food, he just liked leaning on me.

Every morning when he heard the barnyard gate open, he'd call out from the barn. I have so missed his calls these past six days. He never called out again after his fall last Thursday. Sometimes Floyd was so excited to go through a gate or stall entry with me, that the two of us would get sort of stuck since he is so big. Floyd tolerated anybody in the barnyard. He was not a fighter, perhaps because of his size he knew he didn't have to be. He put up with a lot from The Head Troll, who seemed to admire him and have a crush on him, but then could turn and smack him with her sawed off horns. And he just stood and took it like a man, not flinching.

I don't know his history, although he had a hole in his ear where a tag used to be-this could mean he was a working ram somewhere and then was sold, and became someone's pasture companion. Or he might have been a 4H project and they were unable to go forward with selling him. When he was elderly, he was relinquished to New Moon Goat Farm Rescue, where many of the adopted goat Misfits have first been taken before coming to Apifera. He was over thirteen, which is old for a sheep, especially a big guy. He arrived with arthritis and a bit thin, but put on weight and fit right in.

Floyd loved to have his cheek stroked, and I did this a lot in the past week. Today when he went on his way, he was calm and put his head in my lap and I stroked him off on his journey. I shed my tears yesterday, knowing he might be in distress. But today, I was so relieved for him. He is at peace and doesn't hurt.

But I will miss him. He had a big presence here. He was my right hand couch. I will always remember his eyes and his big old head and nose.

{If you want to help offset the vet call today, you can donate at different reward levels here.} 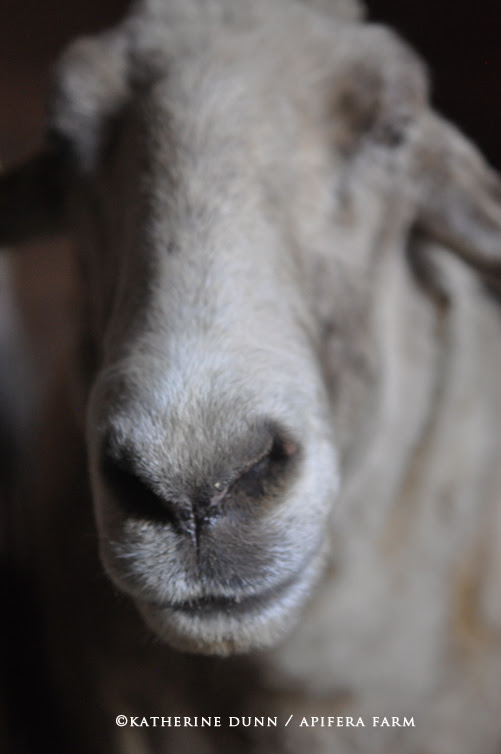 bless you for what you do, day after day, giving your "all" to these animals in need.
sometimes i think you're going to be the lucky one, someday, in the hereafter. will you share all your animals with me, on the other side??

A beautiful tribute for an extraordinary animal. I am so moved by and appreciative of your thoughtful caretaking. Rest in peace, Floyd---you will be remembered.

You filled his last days with love, and helped him exit with peace and dignity. What a gift, Katherine. I'm so happy you had each other.

I'm so sorry for your loss. Floyd was Beautiful and obviously well loved.

Floyd, I knew today I would read that you are at peace but I still feel sad. Goodbye sweet Floyd.
Katherine, Lovely painting.

whatever the hardships that may have come before, i think knowing they were loved and cared for in the end is all that truly matters.

you gave him a good and happy end to his days and a merciful release when the time was right -- no small things, those.

Oh Floyd ... oh Katherine ... you surely do the work of angels and I marvel at all the strength and love ... it holds me up to witness it here in your words, your art and their eyes. Blessings to you and the barnyard. And thank you for all of the care and comfort you've sent my way. Your example is a blueprint for how one continues on in love and with hope and trust. xo