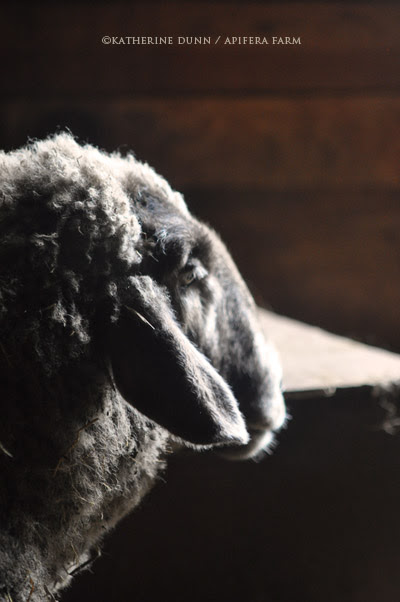 It has been a very traumatic and exhausting twenty or so hours. It started yesterday at dinner feedings. I was going about my business when I noticed my shadow, Floyd, was not there as usual. This is unheard of.

We have had lots of rain-down pours for a good part of each day–for about four days. The ground is slick. I saw his large cast body by one of the gates that leads to the other Misfit paddocks. His usually off white body was pretty much mud colored. He was not moving even after I called as I ran to him. But he was alive.

He was shaking. And he couldn't get up. I got his rear up, but his front would collapse. I got his front up, and he couldn't lift his rear. You could tell by the ground he had thrashed and tried to get up. So I ran to the barn to get a packing blanket-to hopefully roll him onto to it somehow and thinking it would give him traction.

Floyd is a big, big guy, much bigger than my sheep. I guess he weighs about 250-300#. I tried for about 20 minutes and could not get him up. Man, I tried! My back was already strained and I knew I had to stop. I was completely soaked. I was able to get him on the blanket, and I ran and got one of the new pony coats someone just donated, and blankets. I have no idea how long he was down. It had poured from about 2 pm on, and I had last been in the barnyard at noonish. I had to get him to the barn, so I tried first roping his body and pulling, but I just didn't have the strength-and I'm no wimp. I knew we needed to strap him to the tractor somehow to get him up the small hill to the barn and I needed more man power.

To be honest, I was starting to get frantic. Martyn usually comes home around seven and it would be dark by about six thirty. It was near six. I ran to call Martyn and fortunately he was 25 minutes from home due to the rains. I then got some electrolytes and sheep drench in Floyd hoping to get him warmer.  I fed him grain-which he devoured–a good sign. Feeding a downed sheep has its risks, but I opted to do it because he was shaking. I stayed with him and lay on him to help with some warmth. I sang him "Somewhere Over the Rainbow", an odd song choice but its all I could think of do do at that point, waiting for Martyn.

Martyn arrived and I was sure we'd have him in the barn soon. But no such luck. First we tried together to get him standing. He just couldn't stand. Then we got the tractor and rigged up some roping. I held his head in a towel to protect it, and we started dragging. It was horrible to watch. We kept having to stop to adjust the packing blanket underneath him. And when we got to a certain point on the hill, he was precariously positioned, and slid back.  I knew we just had to somehow drag him together into the barn once we reached level ground, and we did. The mud helped the blanket slide, but it was still back breaking, even for Martyn.

I got more electrolytes and anything I could think of into him. He wouldn't drink warm water so I gave him propyl glycol. We positioned him so he'd be sitting upright. He did give me a few burps so that was good. His eye was swollen from his attempts to get up. Fortunately he is a wool sheep so though he was wet, his wool helped, and it was about 55 out so not too cold. But he was still shaking. I stayed with him for more than hour, watching, hoping he'd stand for me once calm. I'm sure it was a horrific ordeal for him.

But he never got up, and a couple times just wanted to lie on his side. Not good. I propped him up, stuffed hay all round him to try to keep him up, and then just let him be. I had done all I could and I talked to him for awhile before going inside about eight. I was soaking wet from head to toe and was shivering myself.

I went to check on him at 10 and he was upright, and his eyes looked good. He was breathing calmly. He had good color in his lips and eyes. But, I sensed a closing down. I stayed with him and he seemed to like having his face gently stroked, and then I went inside for the night.

I found him on his side this morning, but got him upright -he still could not stand. He ate well again and I dosed him with more electrolytes. His body functions are normal. I decided to put Victor and Sophie in with him in a private suite-it is Old Man Guinnias' old stall, and it is the stall where the sick and hospice patients go. It is where the lambs are held before harvest. It is a very special place, the light is beautiful there and I propped him up so he can see outside.

I have a vet on call, but right now we are waiting. Each time I have gone out, he has moved his position slightly, but still can't rise. I'm afraid feeding him while he is lying down [not cast, just lying down] will eventually catch up to him. But, it's all I can do. He doesn't seem to be in pain-no teeth grinding or neck stretching. And today I felt like he really wanted to get up. I am hoping that he will gain strength.

I don't know why this happened. He could have had a mini seizure and gone down. I don't know. None of the other animals had gone to him either, which I thought telling. But, I'm often wrong.

I think one clear realization for me is that I can't take on any more large animals. I have to be able to care for them on my own if Martyn isn't here or it is night time. We should probably invest in a fork lift for the back of the tractor, I could put a pallet on it and might have been able to get him on it. I wouldn't trade one second with Floyd. But when I couldn't lift him, I can't tell you how scary and frustrating it was, thinking he might be out there so long that he'd die because of it. Many animals on farms or the wild do die that way, at no fault of anyone. It is nature. But I told him as I held him in the mud patch, both of us shaking, "You are not going to die in this way."

So I will stay calm for Floyd, and he is safe now, and in a dry place. He knows I come out and check on him and he knows the sound of the gate opening. He does not seemed panicked. He might just be tired, and he is very old for a big sheep. This just might be his time. This is a very reverential time. I only hope to do the best for him, and what is right at the moment. I will keep you posted. 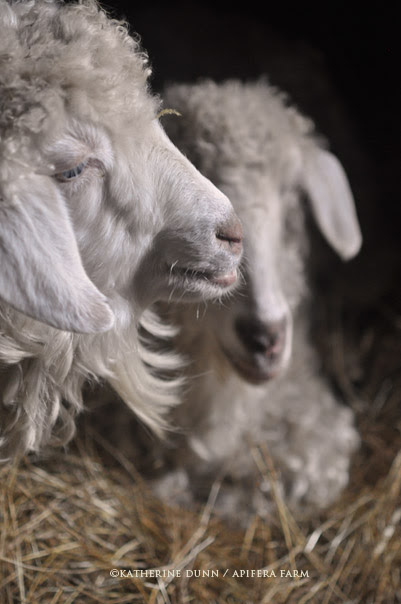 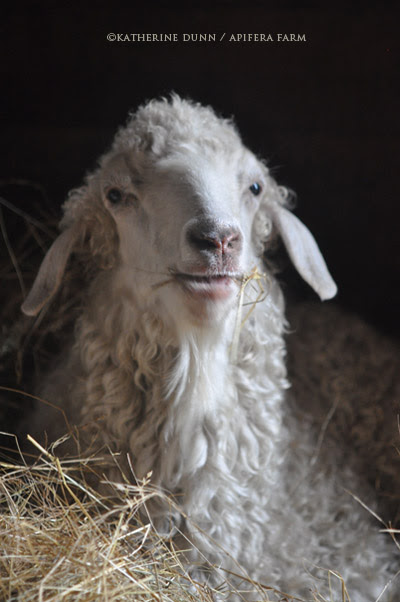 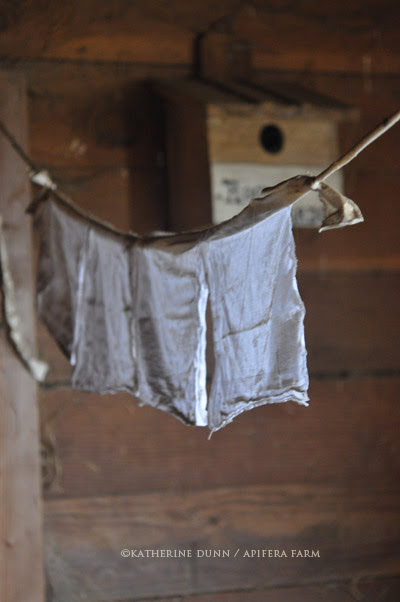 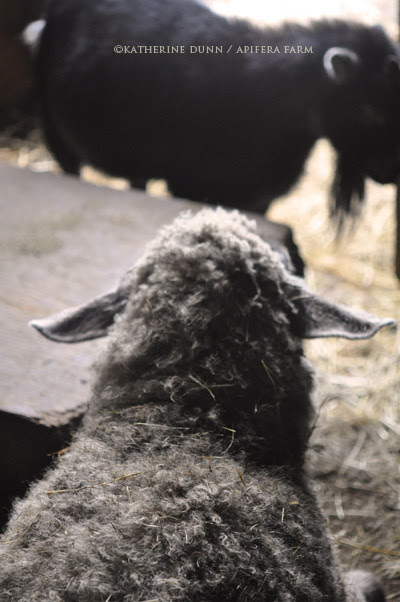 Posted by Katherine Dunn/Apifera Farm at 11:38 AM

Email ThisBlogThis!Share to TwitterShare to FacebookShare to Pinterest
Labels: Apifera's Adoptees, Floyd, Life on the farm

Praying for peace and strength for you both.

Oh Floyd! How fortunate for him you are one determined (possibly stubborn? i mean no offense ... myself being a sister Scotswoman) shepherdess. I hope you both are rested and recovering. It has been a hard time all around. I know, you know. Thank you ... I've been dipping into your journal and it helps so much ... familiar terrain and another's thoughts giving space for mine ... xo

This is a traumatic time for you and for Floyd, and I think you are the best Misfit animal mommy in the world. Maybe Floyd will perk up, I hope so.

oh dear...what a terrible thing for both of you.

i'm glad that Floyd is warm and dry now....time, as you know, will tell.

We are thinking of you and Floyd with our hearts.