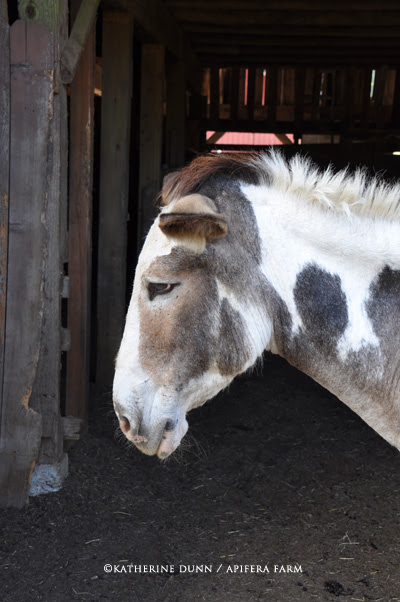 "Animal Conversations" are a gift of my life  and I want to continue to share them with you, and explore the feelings and ideas that stem from them.  I hope you will find time to listen to these creatures too. To start out, I am posting a Conversation I had many years ago, when Mother Matilda arrived–some of you might have this one in the book.

Her job was to be a brood jenny even as she entered into her senior years. Living in neglect, she subsisted only on straw in a cold climate. Her fortunes changed after a donkey rescue found Matilda and eight other neglected herd mates. Eventually they connected with Apifera and she arrived after a day-long journey. She had the same name as my elderly mother—surely this detail was not lost on the universal forces in charge that brought her to me.  {This Conversation appears in the book "Misfits of Love"}


“I remember her ear tips as they drove away,” the old donkey said.

She was speaking about one of her many children.


“No matter where they took them, they came to the earth through me,” the donkey continued.

They can’t take that from her, I thought.

I put my arms around her neck and lay my head on her withers, looking back over her sagging spine. She didn’t move, except for ear motions to redirect a fly or acknowledge a fluttering hay stem.

“I never watched them get in the trailer,” she went on.

She reached over with her nose, touching an area of her back where scratching would be appreciated. I obliged.

“I could see their ear tips coming out of the trailer window as they drove off. They were pointed toward me,” Matilda said.

She scratched her knee by nibbling on it with her wiggling, giraffe-like lips.

To say the soul is not a physical entity could be disproven by looking into Matilda’s eyes. For there was a river of sentiment flowing from her glance into any viewer. I have seen it silence the outspoken, calm the over- energized, and touch the brokenhearted. Journeyers onto Apifera often write and share the more profound moments from their visits, which always include the simple phrasing,

Arriving at Apifera, Matilda was placed in with the three resident mini donkeys. Her larger, white and brown spotted body must have seemed mythological to the gray minis who had never seen such a creature.
“She seems to have acquired spots somehow,” said Pino, the first donkey of Apifera, when he initially saw her.

On the day of her arrival to Apifera, the always observant minis cautiously gathered around Matilda. I took note that the spacing between each mini appeared to be equidistant. I sensed this might be some kind of donkey ritual, of which I know they have many. I did not ask and they did not explain, nor did they share what was said in the huddle. It lasted a minute, if that, and then the little ones ran up and away to their favorite spot on Donkey Hill. Now their mini bodies were little gray spots with tails
prancing about, heads down in donkey play, but all the while they were looking back toward where Matilda stood, her sway back casting a shadow like that of a fertile mountain valley.

In the days to come, the minis treated her much like the Mother that she was. She groomed her little herd mates and they reciprocated, a charming equine behavior of acceptance. Matilda’s first weeks at Apifera were spent in carefree fashion, sunning and adjusting to her new heavenly diet of hay, grass, apples, and animal crackers. Old growth savannah oak gave her shade and at night she was free to dream deep in a century-old barn that had proven to be full of much motherly love itself.

“My purpose was to be a mother. I am old now. My children are scattered,” she said to me one day as I brought her berry branch clippings for a treat.
The conversation did not go past that, but as she chewed, I felt her searching for and then spotting the little clump of minis down near the stream.

Days turned into weeks, summer air became cool, with morning fog blanketing Old Barn. And one morning, the normal routine of the donkeys was diverted. I had gathered all the donkeys in a paddock and shut the gate behind me.

“What’s this?” the minis queried, speaking in ear twitches. “Is it shot day? Farrier day? So soon?”

Matilda’s soul streamed into me, questioning me with concerned eyes and active ear movements. The last time she was herded up like this, she was put in a trailer and after hours and hours, landed at Apifera.

I reassured her without words, gliding my hands up and down her back and neck, but I was soon interrupted by the cars coming up the drive. Matilda stood close to the minis and observed the strangers walking toward them.

They were all very polite and quiet, and carried nothing that raised suspicion—no vials of medicine, no syringes in chest pockets, no halters with long ropes.

Once in the donkey paddock, the people walked all around, slowly, watching, listening, and drawing things on paper tablets. Many seemed to gravitate to Matilda, who stood motionless.
“I am here, come closer,” the old donkey said with her eyes. “I will mother you.”

They began resting their hands on her in silence, gently rubbing her shoulders or her mane and temples. Matilda acknowledged each person’s space and then looked into their eyes, deeper and deeply. Some put their ears next to hers, others leaned on her body, running their hands on her
curved spine of age and neglect, recognizing it as a sculptural sensation.

“I felt compelled to get close to them,” Matilda told me later when everyone had left.

“They gazed on me like a Rubens painting of clouds,” she went on to tell me. “They shared the symphonies that play in my ears,” and she paused to eat some grass.

Her new purpose at Apifera was now sealed and she clearly understood her present and future task.

She slightly bowed her head before me so I could use it like a head pillow. We spoke not a word while clouds blew over Donkey Hill. 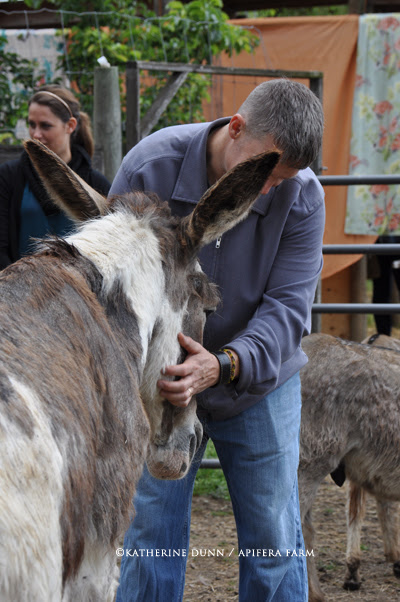 I'll never forget Matilda's love. Can you tell her that for me, Katherine.

I will....I tell the animals stuff like that a lot, for them as well as me.