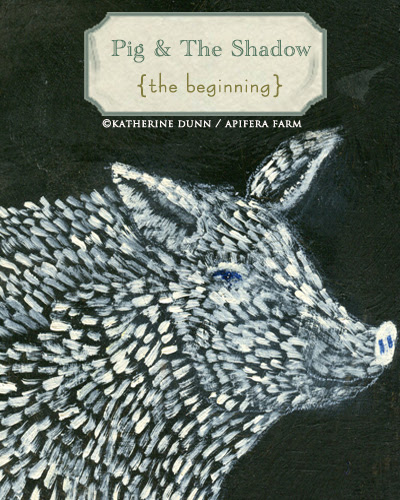 For those of you who know the story of Rosie and Stevie, this is from their early years.

Pig grumpily arrived at her bed of straw mounded in a dark corner of a large stall in the old barn.

With her arrival, there was the nightly exodus of each and every barn animal that might have been standing nearby at her passing. They left in an orderly fashion–but with a clear purpose–to get away from Pig.

Making sure she was indeed alone, finally, Pig began to prepare her humble bed, by carrying clumps of straw in her mouth and mounding it into a pile, and then burying her self under it, creating first a tunnel and then a womb to lie in.

"Good evening," said a gentle voice in the shadowed corner opposite her.


Pig grunted hastily, alarmed she was not alone.

"Stay away!" the pig snapped. She was void of social graces.

The short conversation would repeat itself for many nights to come.


The winter arrived suddenly, catching Pig off guard one night–bringing a dry cold and a wind that
could freeze her piggy ear tips.

With each mouthful of straw she gathered to remake her bed, the winds scattered it sooner than she could turn around and grab it. She was cold and grew frustrated, her grunts worsening in their tone. She was not used to living like like a field mouse searching for warmth on a stall floor. In her former life, which seemed so far away but also so close, she had her own room, with blankets and pillows and stuffed pigs.

She dived into what straw was there but it could not cover her body. She felt despondent as she yearned for warmth again.

"I must be freezing to death," she thought gloomily.

Her grunts alerted the mice, owls and huddled cat colonies that she was uncomfortable and dissatisfied with this arrangement. Their shadows in the moonlight showed they were moving farther away from her as she grew more agitated.

"Come sleep by me, I am cold too," the gentle shadow said.

Pig stopped complaining for a moment, but did not move.

"Please, Pig, come lay near me," the shadow creature pleaded.

And just then, a gust blew in so strong that Pig's bed blew up all around her, leaving her body shaking. Rakes and shovels, water buckets, and hay twine rattled and rolled around her in the darkened barn.

Pig felt her heart beat loudly. The fear of moving near another for warmth outweighed her desire to be left alone in the cold dark. She rushed to the shadow creature and gathered straw around the two of them and for the first time in her life she pressed herself against the hair of another for warmth. They did not speak but fell to a slumber, only awakened occasionally by the rattling and then clanging of a loose tin roof.

That night, she dreamt of her old home, and could see herself under her quilt with her initials embroidered on the side, and little stuffed piggies all around her.

Morning broke into the barn. Pig was still snoring, smiling at her dreams.

When she did wake, the reality of her situation crashed into her whole being, and before her grumpiness set in, she was first and foremost depressed.

"I am an abandoned pig, an orphan of sorts," she thought.

The gentle shadow creature was still beside her, but now was lit by sunlight.

She looked at him and his large frame, raised herself quickly, as if shocked she had succumbed to this sleeping arrangement.

Pig could clearly see her bedmate–a large brown goat, his legs bent and deformed– not like any of the other goats in the barnyard.

"What happened to your legs?" Pig asked.

"A series of unfortunate occurrences," the goat said.

The goat raised his body out of bed, but his front legs stayed crooked, leaving him to hobble forward, his large head bent down to the ground.

"So you are crippled?" asked the Pig.

"Yes," said the goat. "And you are always grumpy?" he asked the pig.

"I was a Princess in a house once. In time I think I could have been Queen," she said.

It was the beginning of a friendship, and even they couldn't imagine where it would lead them.
Posted by Katherine Dunn/Apifera Farm at 11:21 AM

beautifully written, and I saw the entire story take place in my head. Does life ever goes as we plan?