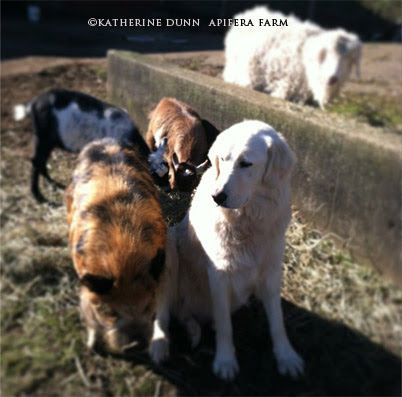 Like any relationship, theirs has evolved over time. Marcella has been a bit sidetracked by White Dog's arrival, but she and Earnest still are buddies....and like buddies sometimes do, there is a fight every now and then. It is always around food.

If you think it might be complicated to feed the various Misfits, you are correct. I have an elaborate system that changes with each new animal's arrival or parting. There are so many gates and stalls that I rely on that it is too complicated to explain, but here's a recap: At this writing, Marcella eats in the hay barn with The Head Troll; Earnest eats in a stall with Rosie, Moose and Goose; Eleanor is now housed with Victor, Sophie, and Scooby Keith, but each has a separate unit within a giant stall to ensure proper feeding; the piglets eat in one area and the sows elsewhere; the lower Misfit Village is for Stevie, Raggedy, Professor and Rudy; and then Aldo who is now hanging with the flock knows to come up and eat in the orchard. But now I have to let White Dog out at the precise correct time-he sleeps in the lower Misfit Village and will eat the goat feed and fight over it, so he comes out and is placed in a interior hall in the goat barn to eat by himself. When he's done, only then can I let the chickens and ducks out, and everyone else. To further complicate matters, White Dog has an issue with the barn cats, so we are working through that, and that is why he can't eat in the hay barn.

So, I digress. Back to Pig and Pup. This morning Marcella was a bit under the weather, not sure why. But while White Dog ran out on his own, she took to sleeping in Rosie's hay bed-much to the dislike of Rosie. Rosie is powerless to Marcella, so she took her pink piggy body out to the sun. Earnest hung out in the barn with Marcella for the longest time. When I went over to Marcella to talk to her, noticing she wasn't feeling herself, she gave me a soft growl, which is her way to say, "I don't feel like being touched right now."

I left her and Earnest alone and went to hang out in the sun with the gang. It is cold here, rare for us, but about 30 today. The sun still feels good and as long as the animals are dry they are content. The best thing you can do to keep your animals warm is feed them properly and keep them wormed, and if you see a shaking animal in the cold, give them hay. It warms them up right away [of course, this is assuming you get them out of the wind and wetness}. Coats really aren't necessary to goats, but I have them on some of the elders.

About 20 minutes went by, and out came Marcella and Earnest, side by side, slowly. It was as if Earnest sensed she wasn't herself. Marcella came over to me and was very submissive. We sat together for some time.

Last week Marcella and Earnest had a fight over food. Despite all my attempts that you read above, there are always little bits of grain here and there, and sometimes Pig and Pup will fight for that one tiny morsel. Marcella seems to rule above the pig now, but every now and then, he gets a tooth in her, like he did this time, under her chin. But then you see them walking side by side, casually laying down by the cement wall to take in the sun's warmth. 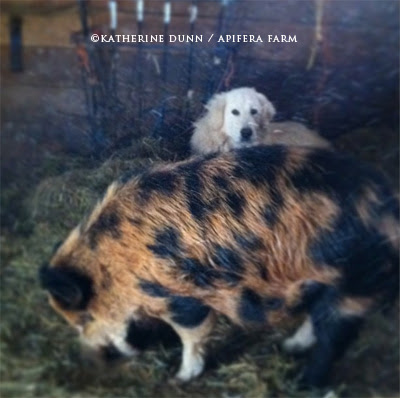 Email ThisBlogThis!Share to TwitterShare to FacebookShare to Pinterest
Labels: Dogs of Apifera, Earnest the pig, Marcella, The Head Mistress

Relationships are complicated but lovely at the same time. Here's to yours Pig and Pug!

Ain't that the truth!

I hope her wound isn't infected. I hope he didn't bite her somewhere else. Sounds like she's hurting.

She's fine, Susan. She got pencillin round. I think it was more realted to 'girl hormones'. She's herself today.

well if you cant disagree with your friends who can you?

Oh what a duo. Yes those mini battles over food, a tooth here and there at our house as well. Some things you just can't avoid. xox