Frustration of the shepherdess 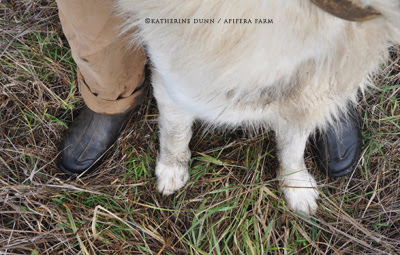 I had a simple plan this morning after chores. I would take Benedetto up to the newly opened upper fields where we just put the sheep and I would walk him on the periphery fence line so he could mark and learn the boundary. I took my camera thinking I would have a bucolic morning of walking White Dog, admiring my flock and taking romantic sepia photos of sheep and dog.

The best plans go amuck, which is what happened right after I took this shot of the flock.

Benedetto has shown us in the last weeks he is a runner. Perhaps this is why someone dumped him here. He is also a bolter, but with time I've helped this bad habit at the gates. I took the dogs out to the fields a couple weeks ago and they both made it under the fences to the next property. I was panicked, as there are cats there, and Benedetto hates cats it seems. And that neighbor has a gun. Marcella came back pretty quickly. Ben did not, but did return after about an hour of roaming. I have no idea where he was. He is not bonded with the flock because he is separate from them, but if he is to run a muck I can't keep in with the flock to bond.

Perhaps you remember I said some time ago when he first arrived, "This dog might break my heart." I still think he might.

So today, I was going to start baby steps with him and the flock. Let him learn the perimeter first. I had a crappy collar on him. He walks very well on lead, which makes me wonder if he was more of a pet to someone versus a guard. Anyway, I was shutting a gate and he slipped off lead, and zippidity do da, he went. When he goes, he does not look back. Marcella was very upset she wasn't coming too, and by the time I'd made it to the top of the sheep hill, there she was. So I collared her and called to Benedetto, who we could see running like a mad man in the nearby neighbor fields. Martyn heard me yelling at the dogs and met Benedetto on the road and brought him back up to meet us. So the good news is, he comes, at a certain point. That's when he looks at me like an old marshmallow and looks deep into my eyes. When he gives me that look, I tell him to not leave. I realize that perhaps I don't give him enough credit, as he hasn't ever really left. Even last week when he was gone over an hour, he came back.

I wonder if that is what he is saying to me with his marshmallow expression, "Why the worry, why do you constantly tell me not to leave, I haven't left, I always come back."

Ben and I are bonded in a different way than I am with Marcella. Benedetto is almost like a child I lost and refound–I feel more panic when he runs off. Because Marcella was raised up here from a pup, this is her place and she knows it. The few times she has made it out a gate with Benne, she returns to her barnyard pretty fast. Benedetto, only neutered two months now, is still bonding with this land. He seems very happy and content, believe me, but he needs more work. And that is where I start to cling, because I don't want anything to happen to him outside these fences. Maremmas do not necessarily 'come' when you want them too. This is a good thing, really, because their job is to guard and protect, not come to any voice that might sound human and friendly.

But it is maddening. I'm frustrated.

I'd heard this from other shepherds, and trainers. It's not as easy as thinking I need to 'let go' and let him settle and learn the fields. I don't see how I can do that when he takes chase of the flock and then leaves the property.

Back in the barnyard, he came right to me and sat with me, as did Marcella. They never hold grudges, even when the shepherdess can be heard yelling in the hills. Martyn assured me it is a matter of time with them. Perhaps Marcella, as we intended, will be the real guard, and Benedetto will guard old crippled goats. 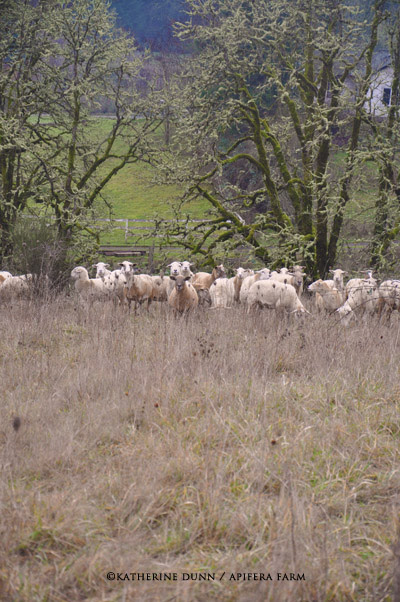 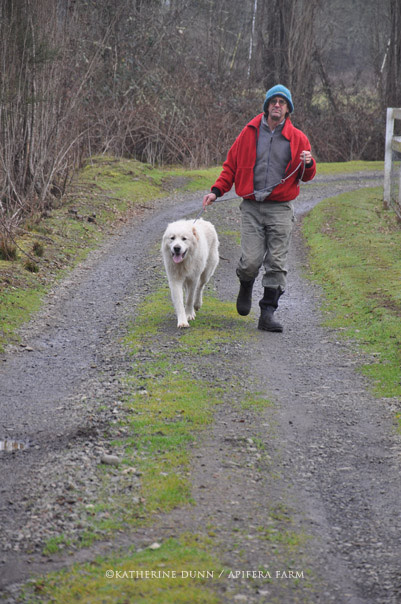 I know that marshmallow look ... I had a Springer who once off the leash would head for the hills (such as they are here on the prairie!) to spring and chase and roll in some horsey goodness with a final dip in the lake for good measure! I would be so angry (of course, I was the one who let him off leash!) and he would look at me perplexed as if to say "What's all the fuss? I came ..." Yes, when HE was ready! Deep breaths Shepherdess ... sounds like Benedetto will be leading you through some deep lessons. The subtler nuances of letting go ... oy vey! ;)

Good luck with him. He's a big boy. We've always had hounds and we had a coonhound who would not stay in an "electric fenced yard" so we finally fenced to 4 feet and she would always find a way to jump out. She would bolt into the woods after something but always came back. She and her beagle buddy did some pretty wild round trips - I have driven 5-6 miles from home to get them. They are gone now to their next life but our red heeler mix jumped 4 feet, so the Maine house now has 5 foot fencing. Everyone stays home. I am so glad I don't have that panic feeling anymore. Whew. Good luck with him, he is a beauty.