Transported with old goats in a duck hut 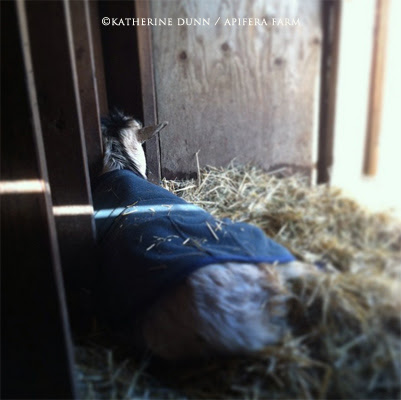 Yesterday Ezra was clearly declining. He did manage to come out of the duck hut to be in the other shelter, but lay down and never moved. He continues to not eat and has physical symptoms of a life ending. By day's end, I cleaned up his soiled bottom and carried him into his duck hut. He likes it in there and always has, it's intimate and safe, secluded without being out of eyesight of the others.

I did feedings around five yesterday evening. It was pouring, has been for days. I crawled into the duck hut to be with Ezra. He was reclining, not cast, but definitely in a position not normal for a healthy goat. He was very calm. His heart beat was very erratic. Every now and then, his hind legs would kick out, a sure sign of the body shutting down. But his kicks were very weak.And he would let out little sighs about every ten minutes.

Within time, Sir Tripod Goat came in and sat to our left, and Old Rudy came in and went to my right. The hut is about 6 feet long and 4 feet high. It meant a lot that Tripod came in, as he is still figuring out who I am and if he trusts me.

So there we were, the four of us, three old crippled goats, and one middle aged lady goat, sitting under a tin roof in the rain. It was so peaceful. This is how death should be I thought, but rarely is.

I asked Ezra if he had seen Heaven yet, or his old mates. Then I asked him to look for my parents. I think the feeling of being in that hut, in the rain, cocooned and dry while the outside world got wet and went on and on without me in it, I think that just took me back to my little fort in the sumac bushes in my old homeland of Minnesota where I grew up. I would often go to that hut, on my own, maybe take the poodle, and sit for hours. But I had a warm house and dinner or cookies waiting for me when I was ready to go back to the house. I think that duck hut, surrounded by my current mates, reminded me of that.

When I left the hut, I said my good byes to Ezra. I really felt that was it for him. But I felt so relieved he was so calm and peaceful and did not appear to be in discomfort, no teeth grinding, or moving about. I went and checked on him at 9pm before I went to bed and was surprised he had repositioned himself to be more upright. I was really shocked.

I expected him to be gone. But this morning he was laying upright, in a pretty normal position. He still was all messed up and I cleaned him up again. He refused water and food, all day. He has not moved all day from that spot.

I am once again reminded that death can take time. The body has to shut down, often slowly. I know when a person is in hospice they explain to the family that the dying person often rebounds a little, and you think, "Oh, maybe he won't die," but they do a day or days later. I think of the body as all these little bits of energy getting turned off one by one as we die. When my father was near death in home hospice, my mom said he sat up one morning and said, "I'm still here." He died a few days later.

So I won't make a prediction. But Ezra is lowing checking out...it appears.

{If you like reading about my work with The Misfits, consider a subscription or tip}
Posted by Katherine Dunn/Apifera Farm at 1:32 PM

A great teaching, many thanks.

Wishes for a painless transition for Ezra. The duck hut sounds like a perfect place to rest and transition to the next life. xox