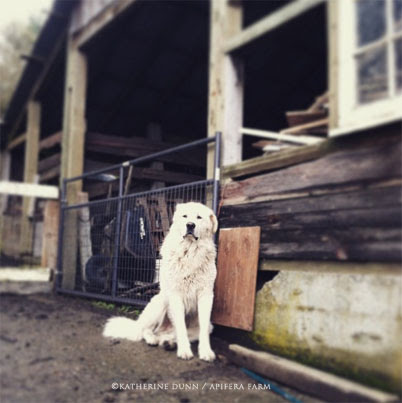 Over the weekend, Benedetto found a hole under the old barn and got out, taking off for the upper sheep fields-the same place he has ventured in his past few jaunts. Marcella stayed behind, which she is prone to do now-her breeding is good and she was raised here as a pup. She is maturing, almost 1.2 years now, and when Benedetto does get out, she seems to stay with her barnyard now. That is the good news.

The bad news is Benedetto went much farther this time, or maybe he went as far as he did the last time, I don't know. But I do know that he did not come back, hour after hour. I was in the midst of dealing with Ezra that morning, hospicing the old soul, and had to focus. I knew Ben would eventually come back, or he had in the past few outings. But I wasn't happy. I wasn't mad, just...crushed.

A few hours later, up comes a woman from the drive, with Benedetto on a rope. She and her mate live about 1/2 mile from here, maybe less, but they live across the open fields, and if you stand on our upper pastures, you can see their place. The scary part is it sits on a very busy road, one I refer to has Pet Cemetery RD, for obvious reasons, which he had to cross.

Firstly, he couldn't have gone to a better house. This kind woman took a lot of time out to walk up and down the roads, hoping to find an owner, asking passing trucks and such. She said she almost didn't come up our road, but I am so grateful she did. They would have taken him to get scanned she said, so that is a relief too. I asked her what he was like when he showed up at their place. First he came bounding out of their back field, and she said he looked joyous. I can just envision that look, because I see it here too. But when he came around to the windows, he was friendly, but seemed lost. Selfishly, this made me feel better.

After she left, I couldn't stop thinking about it all. I spent the day making sure the lower barn holes were closed. He'd found one where the wood pile had been depleted in the last few days after we had fires, and smooshed under there. This breed can do it if they want. When he was back in the barn, he immediately fell asleep.

I am the first to admit I'm way too attached to this darn dog. The woman said that he obviously really wanted to come in the house. This is exactly what he did when he showed up here. I figured he'd return to his own home, since he was a valued guard for someone. But he looked longingly into the windows. He slept on the porch that night. The couple times Marcella has gotten out and veered to the house, she goes submissive, and doesn't stick around, heading back to her place.

I have decided I am not going to pressure myself, or Benne, to be a flock guard. That is what we got Marcella for. He is a wonderful barnyard guard, and can guard the center fields that have stiffer fence. I am not going to risk my heart and his life for this. No advice please.

But, I am thinking-and might have mentioned it before-that I had an inkling on his arrival what a great therapy dog he would be, or already his. He certainly is to me. But when this kind woman brought him up, she told me how much they fell for him and were ready to keep him. The next day, I took them lavender as a thank you. We visited a long time and we are all so glad Benedetto brought us together, as they are newer in the area. We decided that already is one good job he did.

Could Benedetto's purpose be to unite me with others, including maybe the ailing or hurting at an elder care facility? I am percolating this. It is a time commitment. I am also thinking of adjusting Benedetto's time in the barnyard, so that some afternoons he can come into my studio with access out back, then return in the late day to be in barnyard.

But here is one thing for certain: this dog is special, is loved and wants a bigger job. But I don't think guarding is it for him.
Posted by Katherine Dunn/Apifera Farm at 2:52 PM

Email ThisBlogThis!Share to TwitterShare to FacebookShare to Pinterest
Labels: Benedetto, Dogs of Apifera

I really want him to stay with you too. What is he wanting, I wonder? Does he seem vey interested in people? Would he ever live in the house?

He loves to run! I let him run fields tonight, and he came back and slept by the gate [it was one of the very secure fields]. I think he'd be happy in the house for about 1 hour, then would want out. These dogs are not bred to lay around in a warm house. But I do think tweeking his current job in the barnyard, to add a patrol in a safe field, and then time with me, might really please him. He' very happy I think. He just has wander lust. I think going outside the other fences isn't so much 'I'm running away' as 'I need to make sure this area out here is okay" and the other day, I think his nose got the best of him and when he looked up, he was farther than he thought. I don't know....Keep in mind he's newly neutered too....

We've had some scary walkabouts with our various shelter dogs over the years especially our coonhoud and beagle both of whom have passed on. Sounds like he does need a bigger job. Nice that you've met some new neighbors. Good luck with him. xox

Fingers crossed that his wanderlust doesnt carry him too far away from home!