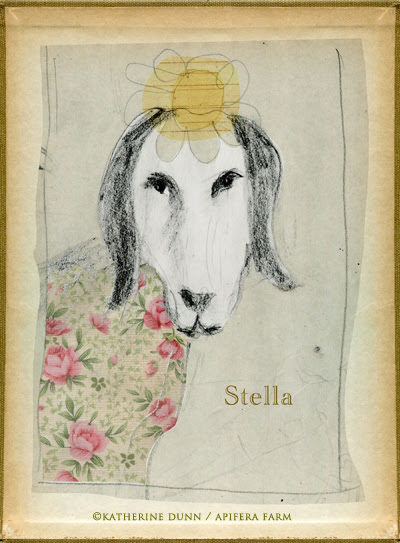 It's been one of those weeks. A thought crept into my head a couple days ago,

"They are all going to start going now," but then I pushed it aside.

"They" are the first arrivals to Apifera, the goats, sheep and chickens that came here before the first Misfits. For before I knew of New Moon Farm Goat Rescue, I acquired two Boer goats and promptly named them Stella and Iris {Wild Iris, which could not have been a better name]. I paid a lot for those goats, thinking I should have good stock just in case. Well, I don't regret it. Stella and Iris have not only been my muses over the years, they have done the job they came to do-eat acres of bramble. Martyn claims it saved us about $5,000 in clearing costs. He also will point out that if you deduct the labor and money of fixing fences over 11 years, and the damage and replacement to trees, roses and other things they consumed along the way, it might be a wash. C'est la vie de goat.

But I can't imagine Apifera without Stella and Iris. But that day is coming.

I write a lot about death because it's here and there and over up on that hill. I am not 'used' to it, but I don't fear it like I might have once. I don't really fear losing my elders, I just am very aware it is always there walking with me, and I'm aware that there are good deaths and not so good deaths, and there are aftermaths to all deaths for the living. And that is why my life is worth suffering in, because it's life, not death. It's all I have.

We are going on our 11th year here at Apifera. When we lost Henny Penny yesterday, it was a real time marker. She was our oldest hen, and there are others that will most likely follow soon. It is just like any other village, the elders take their place on the mandala, as do I, as it should be, as it must and will be. But drive through any village and there are so many that came before with so many stories. Who will know them now?

So, when I found Stella unable to get up on Sunday, I knew the time was approaching for her. She is 10+, getting up there for a big goat. About a month ago, I decided to remove Stella and Iris from their home of the donkey pastures. This was mainly because they have been breaking out constantly. I wouldn't care that much but they had ventured through the back woods and over to a neighboring farm, where the owner is someone I'm not fond of for various reasons. He kindly let me know about it, and I retrieved them from his cow pasture. But that was my sign that it was time for these two to retire into the main barnyard. I also had been trying to put weight on Stella who has gone a bit ribby on me. She has barely a tooth left and I wanted to be able to supplement her better.

She was able to sit up like a dog, but couldn't get her rear up, and when she did try, it looked like her hips and hind legs were flattened and paralyzed. When I got her up, she was okay and stayed up most of the day, and each morning I have had to help her up. She is eating fine. I figured it could be a pinched nerve.

This morning, she was standing and I was not only surprised, but relieved. We will see if that continues. I had a sheep once that looked paralyzed in the morning, and was fine at night-I think the pinched nerve idea might be correct. I'm grateful she isn't casting herself-that's a death sentence. I've always been much closer to Stella than Iris. Iris won't mind me saying that, it's her own doing and she has had a marvelous time with me, always asking important questions, like,

"How did you get here? Oh yea, this is YOUR side of the fence, oh heaven's, I'm practically in your garden."

I have also had worries about Ezra. He is not doing that well, despite my efforts. It might just be his time after all he has been through. But I really hoped to get him through to the warm weather-which can do so much for the elders in strengthening their body and spirit. Stay tuned.

Email ThisBlogThis!Share to TwitterShare to FacebookShare to Pinterest
Labels: Old goats of Apifera, Stella and Iris

I'm relieved, and grateful, to read that Stella is doing better. She and Iris are such lovely, spirited girls.

And as always, I appreciate your wise, poignant insights about life and death and aging.

Hugs and good wishes for both Stella and Ezra. I was so glad to see our 14 year old lab trot along our beach walk this morning since he to is getting that ribby look. Cherish each day. That's all we can do. xox