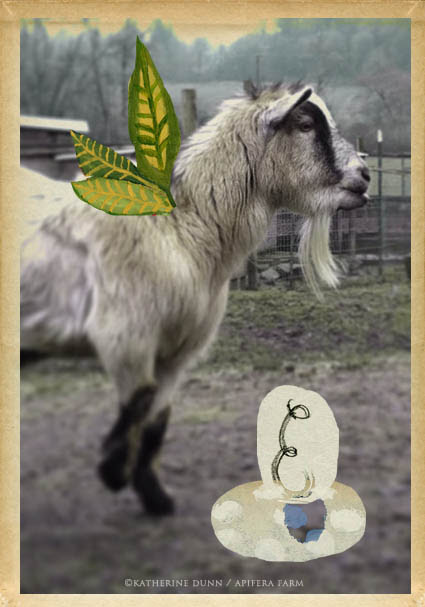 Ezra's body took a long time to shut down.He passed around dusk yesterday. His stimuli and reactions showed a body without a spirit, and for a body that was so malnourished and elderly, he hung on much longer than any other goat I'd witnessed die in my eleven years here.

It was an uncomfortable few days for me and took its toll. While I feel his spirit was not there, it is hard to watch the silent struggle. If I'd known what I know today, I might have acted differently on Friday. But I am not going to beat myself up-I did my best for him. He was really not present for the past 24 hours.

I sang him my standard, "Over the Rainbow" but also opted to sing some "Felling Groovy" renditions. Sir Tripod Goat and Old Rudy continued to eat normally by his side in the duck hut, and in a strange way, Sir Tripod Goat seems to have warmed up to me more over the past weekend, perhaps he senses for real now, that I am caring for them all.

I think Ezra and Mrs. Aster, and the entire herd that was taken off the property where they had lived for their entire lives are the saddest cases I've dealt with. But this morning I think there is something nobody ever really said, and I feel it strongly. I always felt Ezra arrived here a broken man. We all surmised how hard it was to lose his herd, slowly, through neglect-some died in front of him, some were put down later. One by one, they died or left. But, perhaps the real loss for Ezra was when the humans who cared for him physically failed. At one time they truly care for the herd. They had grown elderly too and suffered with dementia. The caretaker did not understand how to care for the goats. Who knows how long that went on, I don't, nobody does. But it was evident inside the home the herd had been loved and cared for once.

I think perhaps that was the first huge loss for Ezra, when the elderly couple failed. Ezra's sense of everyday normalcy was lost.Animals like and need consistency in their environments to feel safe. When the humans got dementia he lost that daily safety net.

I think Ezra was tired and worn out. His body was ravaged of nutrition and spirit for enough time that he couldn't pull through. If I could get him to the spring and get some weight on him, I thought. But that was not the way his body dealt with it.

Even in the end when he was still aware of me, I sensed a goat that was wanting to let go, but had had to let go so many times, and just wasn't sure if this letting go meant he'd end up all over again in a new place.

I am just so relieved for him. And Martyn is relieved for me. He watched me all weekend, in and out of that hut, reassuring me I was doing my best.
Posted by Katherine Dunn/Apifera Farm at 10:33 AM

I'm so sorry for you loss, for his losses. Your connection to him, however brief was a powerful one. Each loss piles up on top of another and it brings us down. He still got love and caring even if he was ready to depart for another journey. And you gave that time him, a great gift after all he'd been through. xox

So sorry, but glad Ezra has found his wings.

I am sorry, Katherine…and you are so wise to find all the gifts in this difficult experience. I suspect that we will be going through similar things with parents in the not-too-distant future, and I take heart with your thoughtful and heart-felt posts. ♡

Oh Erza, Oh Katherine! I wish I could pop over with something warm to offer ... words, pie, tea ... I must say, reading about the duck hut and all of you holding vigil with him, I cannot imagine a more gentle and loving way to go. We all should be so well tended in our final days. The heavenly herd of angel goats & sheep & hens must be a colorful and rowdy lot with stories to tell of kindness and love known. As my dog boy slows down, I am conscious of paying attention to each hug, pat, kiss. Drinking deep the love while I can. xo

Thanks, everyone. It was such a relief for him, and me too.