I gave Sugee her wings 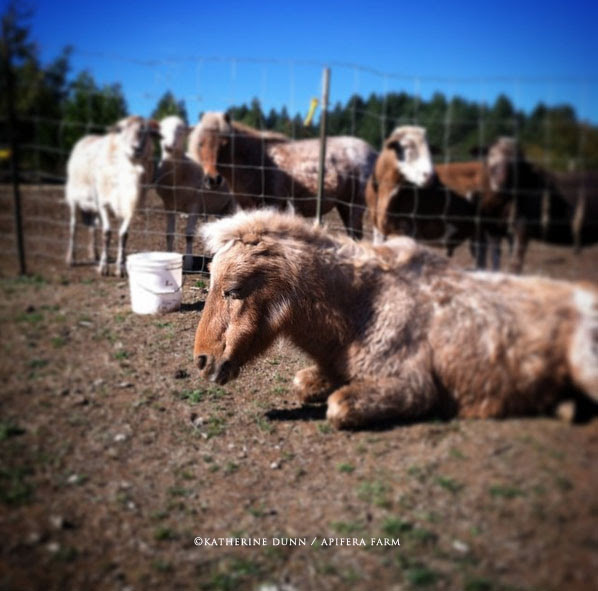 It was a beautiful, clear, cool morning.

I had big plans for the day, as I headed out to do morning feedings. Martyn had to spend the day in town on business so I was anticipating a day of deworming the upper barnyard, fixing some fence, and perhaps beginning to deworm the flock.

I was deep in thought as I greeted Earnest and Marcella at the gate, my head down as we walked to the barn. I did some feedings and was headed to the pig paddock when I saw her. As I ran to her, I was trying to figure out the situation even before I got to her. She responded, barely, as I called out her name.

She had somehow got her hind hip and leg completely caught in the lower pasture fence. I assessed everything calmly, and then ran to the old barn to find wire clippers. Meanwhile her pasture mates-the rams and her daughter Wilma-were some 100 feet away, nonchalantly eating hay.

When I got the wire off her, I could see the upper interior leg area was bloody and very swollen from the pressure of trying to get out of it. I couldn't ascertain if and how deep the wire had cut into her skin. When I got to her she was on her side, and one side of her face had cuts, her eye was swollen because she had tried to right herself but couldn't. Her teeth were chipped, and her lower lip was pretty chewed up, even ragged.

I ran back to the house and the blessing was my main equine vet was on call-she was the vet who had actually been the one that found Sugee with her ears chewed off and starving, and eventually Sugee came to Apifera, so this vet has been out here a lot to help me with Sugee. While she drove out here, I stayed with Sugee, and tried to determine how weak she was. She could not get up. And she didn't have much energy.

I assumed she'd had another seizure, and was possibly still in the midst of one. All of her other seizures she was always able to right herself. Not today. She'd been through an ordeal.

I was able to get her to drink. And then I groomed her mane with my bare hands. She has a huge, full, beautiful golden mane. I pretty much knew we would have to put her down. It was her time.

"My mother used to run her hands through my hair," I told her. I sang to her a little bit too, about a place where her ears would be and she could see and run.

At some point, the rams came over and watched. And finally, old Wilma, her daughter came to the fence and knickered. Sugee did not respond. I knew then without doubt she was ready.

When the vet arrived, discussed options, but we both knew we were putting her out of pain at this point. And we could tell by some of her body reactions she was already kind of checking out. She went fast.

I took these photos before the vet arrived. Some might think it odd to post pictures like this-or even take them-but I believe in sharing the the real life of my animals, and I also feel these scenes are beautiful. What I see here is not a forty year old pony about to die, I see an elder who has been cared for, had a home, and is lying in the sun on a perfect morning. She had trauma, yes, but we were all with her in the end, and she is now at peace. No more seizures or falling, no more fear for me of that happening.

When the vet put the syringe in her neck, and the death medicine went in, the second it was done, we heard Pino bray from the upper paddock.

I too believe that. And I believe that is why her daughter who has been with her for thirty years or more, was so calm. She had said her good byes, perhaps weeks ago.

I haven't asked for money for Misfit care outright for some time, on purpose. But with the many deaths of the past month, burials, vet bills, I have some items you can buy below - to say you honor old lives like Sugee's. No pressure, especially if you can't, or have recently bought art or books.

I'm just relieved for her. She is resting now. 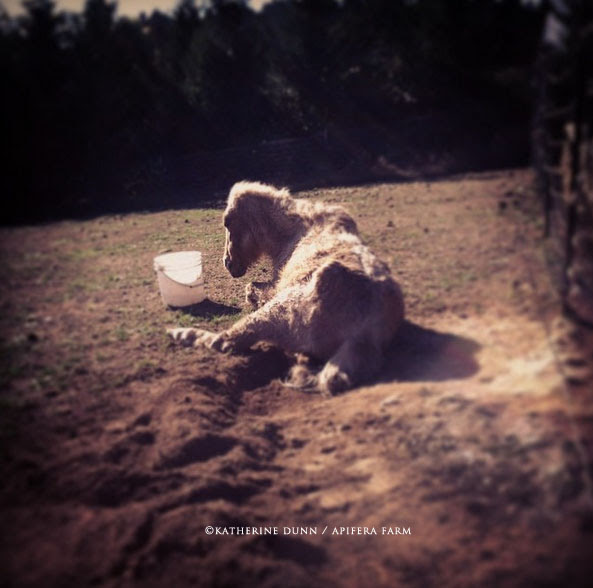 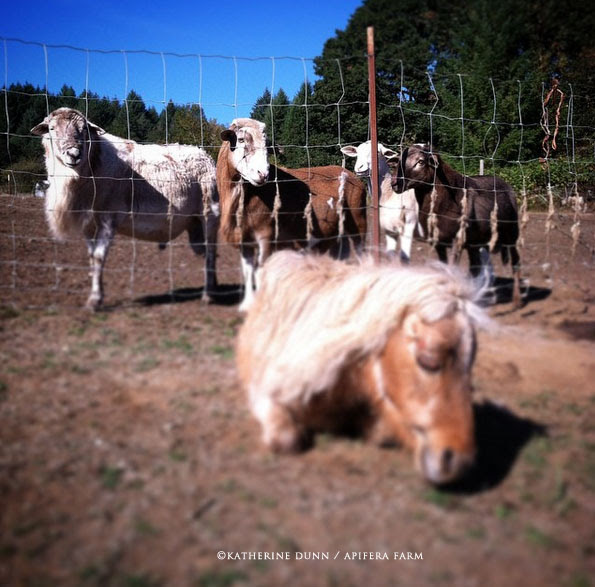 How peacful the photos......you are a blessing for the animals, and for all of us to witness your love for them. THANK YOU for your deep caring and loving soul...Merri

Sweet Mama Sugee ... on that first visit to Apifera I remember how incredibly soft her coat was and how the kids with me were so taken by her, stroking and petting her gently. While I came to see Stevie and Pino, that day Sugee was the one who slipped in and stole my heart. Indeed, she has her ears and wings now. I wish I could pop over for a cup of tea, a few songs and some tears. Blessings to you all. xo

Oh Mama Sugee, soft journey to your next life and bright new ears to to perk up your beautiful face. xox

Sail on to the Summerlands, sweet Sugee. You taught us well.