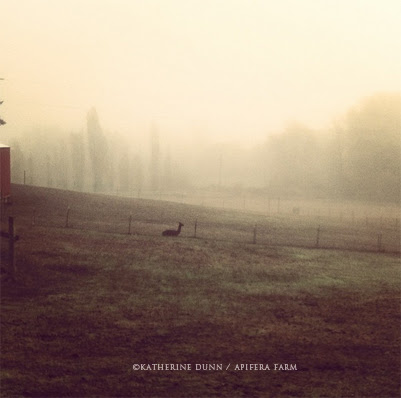 Last night I had an unusual and moving dream. I dreamt I was in what was my mother's house, although like the sets of most dreams it did not look like any of the homes she had in her living life. In the dream, I was in a room where there were still items of my father's. I was alone. I was thinking in the dream how it must be hard to live with these reminders of him so fresh after his death [my father died in 2008 but in the dream last night we had just had dinner with him at a nice restaurant].

Then I came to a shirt on a hanger, hanging all by itself on the wall, almost as if displayed there like art. It was the shirt he had just worn nights before in the dream at our dinner. I held the shirt and cried, and as I caressed it it became very fluid, almost wrapping around me, or petting my head with the sleeve.

It has been seven years since I saw my father alive, and two and half since my mother died. While I do not weep about it any more, I think of them everyday. I still carry that quiet little sack full of inner feelings, sometimes sadness.

But the dream left me feeling rather melancholy this morning, ungrounded in some way. I sensed last night that Martyn was melancholy too-his father died a year ago, his mother was just placed in assisted living, his family is changing and evolving too in uncontrollable ways. We are in the stage of life where many people we've known all our lives are dead or soon to be gone. Elders who used to keep in touch through a parent or aunt are unable to do so-the family and circle of personal community begins to shrink. Things that seem to be rocks in one's life crumble-maybe a couple you thought would never part end up separated, or the teacher that gave you wings dies.

When each loss comes, another thread in our life's coat comes loose, tearing a should seam or pocket.  That coat that kept you warm so many times, or dry from rain or snow has a life too, and an unravelling like any life.

Melancholy is different than grief. It is the younger sister to depression. I know a few people who are really battling depression, and I would never what to say or write anything that might diminish the agony they are in. Depression separates a person from the living world I think.Depression must be the opposite of home. Melancholy still has many glimmers of hope.

I always feel I will work through melancholy when it comes. And I always do. But, some days, I can get stuck in it. I guess I feel that pull today.

I am blessed to have a routine that requires me to get outside, no matter what, and interact with Nature in all forms. It helps melancholy to be sent to the backseat of the morning.

The fogs were here when I awoke. It was almost like my father's shirt had come out of the dream from last night, and become the fog-both a comfort but also a veil in front of me. 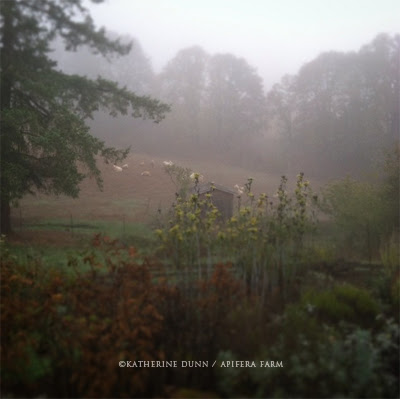 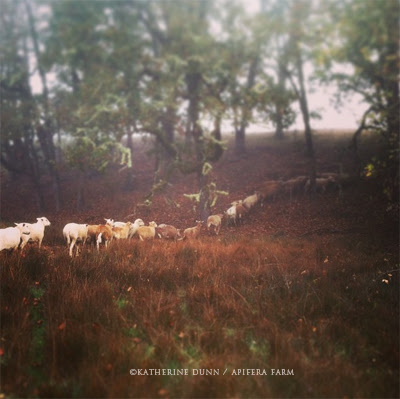 Posted by Katherine Dunn/Apifera Farm at 11:28 AM

I still talk to my father every day, sometimes out loud. I walk every morning across the river from where he worked for 33 years and I can still hear his whispers. He passed in 2001 and my Mother passed in 1981. They never really leave, they just evolve in another plane of understanding. I love the image of your father's shirt wrapping you in fluidity. I totally understand walking through the melancholia. xox

Thank you for reading, Corrine. Wow, 1981. I sometimes wonder what it will be like when my mother hasn't been here for that long. I remember after the first year of both of their deaths thinking, "OK, I made it year-geeze I have to do this for 30 more?" Like you say, they never leave, I teel this to new orphans a lot. It's not the same, never the same, but just having them in my dreams to, so vividly is a gift.

This gave me a lump in my throat` and tears~~ They never truly leave us ~~ My fathers robe still hangs in my closet, he's been gone 14 yrs. My Mom left us 3 yrs. ago Oct. 2 nd~ Oh how I miss them. My older sister yesterday had her kidney removed because of Kidney cancer, The outdoors and my furloves' helps me as well through melancholy. Thank you for sharing your most heartfelt stories with us.

There are days when I know, I just need to move through the day, that the fog will shift, the emotions like the weather always changing even though in this moment, it feels so solid, so enduring.

I am still processing all that I experienced in Bali. While there, I realized I had told my mother it was okay for her to leave, but that I had not released her yet. I met with a Balinese healer and asked him about my grief & sorrow and he told me that rather than crying over her loss, I should pray for her and that way, be with her in a new manner. I don't know if I can explain it as well as he said it, or how I received it. But it made such sense to me. Perhaps too being in Bali where everyday they leave beautiful offerings and incense makes this notion of prayer like a daily conversation? My heart does feel lighter. There is more, but I wanted to share that with you. The image of your father's shirt - that sounds like a poem painting to me. Those objects hold so much of their essence: touch/texture and smell and shape. I see that shirt with wings. For me, it is my mother's shawl that I wore to Bali. xo

I'm sorry for all your pain right now, Anonymous. Walks always help me through things, Nature. Lisa, I'm so happy your journey was so nourishing and fruitful too! I think for me, since its been 2.5 years since my mom died, versus 1 for you] my grief has shifted, and I do think life with them is more like a prayer, or I communicate in dreams. But that first year was a different part of the grief journey for me...but I think what your people said on your trip is spot on-learning to communicate with them in a different language really, as prayer is, to me anyway. I think that shawl oyu wore needs wings and maybe that is a painting for you!