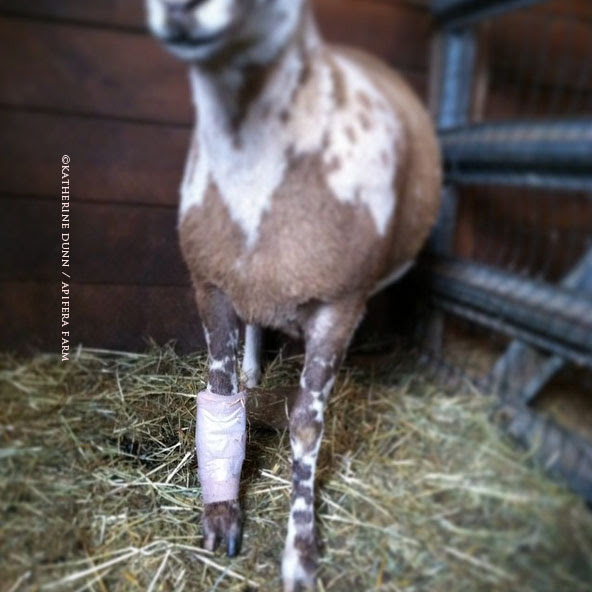 Yesterday I noticed Opal, a young ewe, still laying down on the upper hill, unusual because her flock had already come down to the gate to be set free for grazing. As they fled in their protective herd amoeba, Opal came running on three legs, her right front forearm swinging like a rag doll.

I've never had to deal with a broken leg here, so my skills were increased to include splint building. I watched a quick You Tube video and whipped one up. It was not difficult and fortunately I had all the vet wrap and other items to make one. The poor thing though, it was very stressful on both of us getting her to the infirmary ward. It took some time, and effort.

She has been a good patient and I'm grateful it was the forearm as I think it will eventually heal, maybe not totally straight, but she can now become a Misfit if needed. She is on pain meds for awhile but is able to lay down and stand and hop, and while I'm sure it does hurt, the pain med is helping her, and she is eating hay and drinking. I guess it will take 3-6 weeks to heal but I hope to see improvement sooner. Hoping I can put her down with Daisy and Lilly in the Lower Misfit Village with that gang of the most crippled residents.

OK, thanks Universe for making me have a parallel experience to Opal. This must be part of the overall plan for continuing education of a shepherd.

Martyn heard me crying out in pain and came running, not knowing where I was because I was in the ram stall behind a door, on the ground. He found me in my pathetic position writhing in pain, crying. I've never broken anything so do not know what that feels like, so I thought it might be broken. Martyn has had really bad breaks, from a car accident in his twenties that almost killed him and had him in an induced coma for days, so he has some experience with pain and broken bones. He is always my calm voice of reason.

I had wrangled up the rams, as I wanted to do the daily cleaning and a shot for E.B. White's head, which he mysteriously wounded on Thursday, causing me to give penicillin and topical meds. So I had them gathered in a corner, a good way to grab one animal as sheep tend to herd and stay in a group for protection. They are well mannered rams, never giving me trouble, but Walter decided he was getting out of there, and fled, and the two others fled with him in a panic, causing me to trip, fall over my ankle as they swept over me. It didn't help that I had on my 'clown boots'-which are a men's size too big for me. I often buy men's boots but bought them too big by accident, and then they wouldn't take them back because I'd worn them twice. It's been a year of my little fairy feet [I have really small, high arched feet] sloshing around in them but money is always tight when I think,

I have to get a new pair of boots before I kill myself in these.

I guess the Universe was giving me a memo-get the boots already!

In my optimistic way, I figured I'd just walk it off, but Martyn urged me to go sit for awhile and see if it swells up right away. I just got done sitting for about thirty minutes, it is swollen in areas, but more than that, now when I do certain movements, it really hurts. Going down the few stairs is problematic. I will need a cane to go to the barnyard for sure.

I got sort of instantly depressed sitting there, with my sad old foot thumping in slight pain. I just thought how quickly a life can be turned upside down, and this is nothing compared to the injuries that can occur on a farm, or anywhere.

I was going to go try to recover the rest of the day's chores outside but that might not be doable–and I'm really looking forward to red wine by the fire for natural pain management. But maybe until then, I'll hobble up to the kitchen and make cookies. Raw dough always helps [no lectures, please].
Posted by Katherine Dunn/Apifera Farm at 2:17 PM

Oh dear! This has been a difficult patch. Hope you and Opal will be feeling better very soon.

Oh no...I'm so sorry. Sending healing wishes to you and Opal!

Ouch ouch ouch for all of you. Mend well. The Universe is so good a delivery those messages isn't it? xox

take good care....prayers and love to you and opal....
and thanks to martyn for being so calm and for taking care of you and the farm.

Your man is right: you'll see the worst of it in the first 30 minutes. Ice (or frozen peas...) isn't a bad idea if it can be done immediately. Hope it's better already!

Hi everyone, thanks for stopping in-at day 6, I could put a real shoe on today, so that is great, still limping and man, when I could see how much bruising there was on top and bottom-no wonder it hurt! Opal is eating well, that is the main concern, she is still not putting weight on it but it has only been 6 days, so not expecting that-her demeanor is good.