Midnight at the annual spirit festival 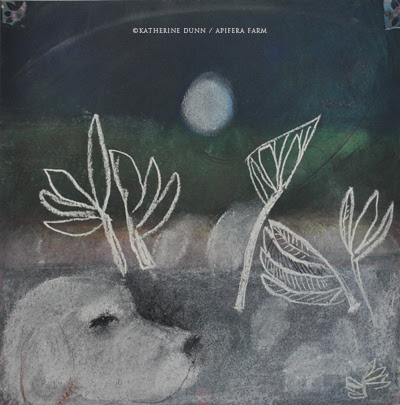 To be honest, I was not looking forward to the annual midnight festival this year. It didn't help that it was pouring rain last night. But I didn't want to break tradition, and I knew that leaving that gang alone in the pumpkin patch graveyard without me could lead to a lot of mischief. While teenagers without manners might go to a cemetery and tip gravestones, my group of hoodlums would do worse–eat too many pumpkins that grow out of the dirt graves of former Misfits–that wouldn't be that bad, but it would lead to overzealous grave digging by Earnest and Marcella which could mean skeletons appearing all over the place the next day. Way to scary for the tenderest of Misfits, such as Paco.

So I put on lots of rain gear, and a big straw hat to hope my glasses wouldn't get all wet, and headed out to the barnyard, in the dark. I could see a faint light at the pumpkin patch. I'd left a flashlight there covered by a bucket so that I could make my way with some guidance.

The animals were already gathered–except Rosie. As usual the World's Grumpiest Pig did not come to the festivities. But of course that is no surprise-she hates rain, and crowds, and festivals.

Almost the second I got there, The Head Troll appeared out of the dark mass of Misfits, whose only body feature I could see were their eyes if the light caught them right. I could see Marcella and Benedetto pretty well due to their pure white coats. In fact, Marcella came to me, keeping any mischief from me. The candy corn can get some of those guys a bit wound up, combined with the mulled cider. The donkeys stood off to the side of the barnyard, as Paco gets very scared at these things and we have all decided, including Mother Matilda, it is best to let him watch from a distance.

Around the group the Head Troll went, holding a stick over each creature's head as she passed, much like a dowser looking for water. When she came to me, I felt something, kind of electrical. Marcella sensed it and became agitated. The stick began to shake rapidly, up and down, and The Head Troll was hardly able to hold it in her hands, but she did.

And then it stopped, and we all sat in our dark group, occasionally batting an eye, but still as a pool without wind.

It was getting cold, even after only about fifteen minutes. We were all waiting for something, anything to happen. Even with the rain, I had so many Misfits on my mind, the ones we had lost this year.

Maybe Stevie will come. And Aldo, I thought.

But it appeared this year it was not to be. Even the spirit of Old Man Guinnias did not rise for us, nor did I feel Floyd or any of the others buried under our feet and hooves. I suppose I was disappointed, but I was also wet and cold. The Head Troll left the pumpkin patch, and everyone followed. The White Dogs followed me as usual to the barnyard gate and I climbed over it to return to the house. I could see light coming from the living room fire, with Martyn in the rocker–no doubt with Big Tony in his lap.

I was startled then to hear the honk of a goose. It had been months since Old Priscilla disappeared, never to leave a trace for me to know what happened. Of course she was over twenty, but I never found her body, not even a feather. My ankle is pretty good after I turned it a couple weeks ago but still gimpy, and I misstepped on some rocks. I fell to my knees. Marcella barked, and I swore, and I yelled to her,

But I couldn't get up. Not because of my ankle, or my body, but because something was holding me down. And the more I tried to get up, the heavier the pressure was that held me, keeping me in this spot. In seconds it was as if a huge oak tree had taken each branch and twig and was applying pressure on me, and in seconds that pressure began to feel like an embrace. I was confused, but not scared.

White orbs beginning as mists grew bigger and lifelike and the embrace I had just received began to pull away from me, but as it did I saw faces, familiar faces, surround me. I was lifted up and carried to the house, and set down gently by the door.

And the white mist creatures formed into one cloud of white the size of a balloon, and I held it in my hands. I felt a peck on my cheek, a gentle kiss. And then the white mist evaporated into my skin.

I went into the house, and took off my rain gear.

At my feet was a white goose feather, a bit of white llama wool, and some deep brown goat hair. 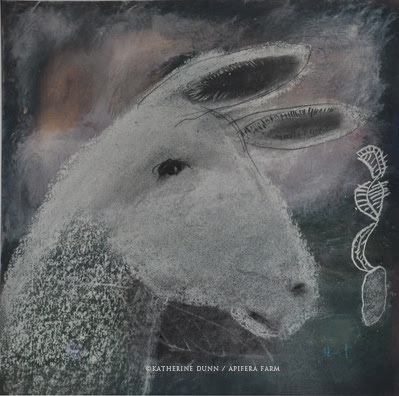 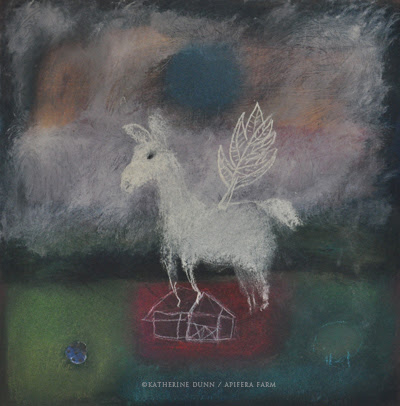 Posted by Katherine Dunn/Apifera Farm at 8:27 AM

So magical, both your words and your paintings...I believe Paco and I are kindred spirits. He writes poetry, and he's obviously both an introvert and an HSP (highly sensitive Paco). I just know we'd love each other's company. :)

Mysterious goings-on at Apifera, it sounds as though the midnight festival was rewarding for all.

Your imagination (but of course THIS was real) never ceases to astound and delight me, Katherine. Were you, perhaps, a court jester or a wandering storyteller/mage in a previous life...? As usual, masterfully told, beautifully illustrated. Wish I lived nearby to interact more personally...tea and cookies, maybe.

This was THE story to read on a Halloween night- and I love a story with a happy ending! Thank you!

Ah the magic of love in this story. xox

I am so grateful for you.

Ohhhhhh ... just sitting here, I can FEEL it all ... perhaps this April I can have a moment by myself to see if I can have just.one.more.kiss. From Stevie, of course!

This makes me really excited for your next book Katherine! xo