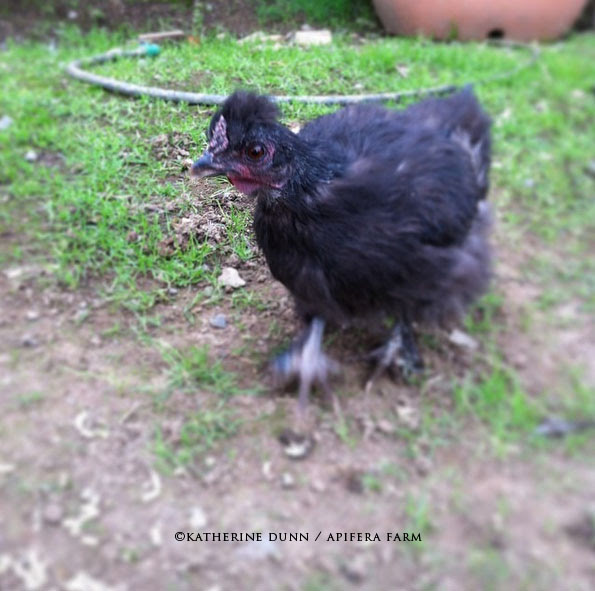 A couple weeks ago, I agreed to help someone out by taking some chickens from her father's property-her father was a nice man and he had died recently. The last thing I needed was more chickens, but as all chicken lovers know, can you really have too many chickens? {The answer is yes, by the way}.

So Martyn and I went over there one day and wrangled up three of the seven chickens, returning later to catch three very rogue roosters and another hen.

When I got a good look at this tiny little thing, I asked her,

"Are you sure you're a chicken?"

But as I got to know her this past week, her size does not represent the determination of this fine waif. She may be small and raggedy, but she is the first one in the feed line for breakfast and does not let anyone, even the big girls, scare her off.

I was waiting to find a perfect name for her. I don't name all my chickens anymore, only the ones that really speak to me. Someone suggested Grace O'Malley who was a pirate in the 16th century. I began calling her that, and it fits her like a glove. Not "Grace", but "Grace O'Malley".

I think this name of a strong woman role model, who died a noblewoman by the way, will balance out her rather homely appearance. But we all know looks aren't what we leave behind in this life. Such will be the case for Grace O'Malley the chicken.

Email ThisBlogThis!Share to TwitterShare to FacebookShare to Pinterest
Labels: Chicken Named After a Pirate, Chickens

I had never thought that there were women pirates! Wow...she must have had some balls to be one. I bet she was first in the chow line too! By the way...that little chicken is capital A Adorable

That will be one tough chicken then, able to fend off all sorts of attackers. She's kind of cute in her homely way is Miss Grace O'Malley. xox