Early days of Apifera and Nature as friend 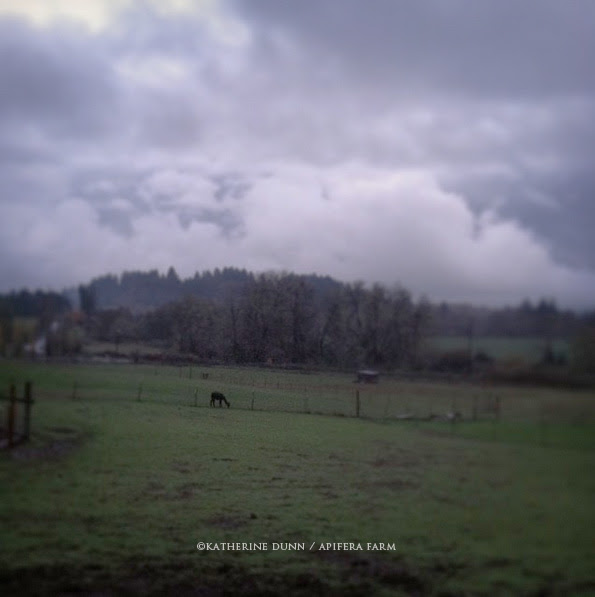 I took this photo last night of Wild Otis, at dusk. The clouds were so powerful. The morning fogs have returned and I was contemplating this last week at some point-that fog was my blanket when I first moved here. I had moved to Portland from Minneapolis in 2002, single, and two years later, I was married and moving to a rural area where we knew nobody. I only knew one person, my brother, in Portland before I met Martyn.

Arriving here was not only culture shock, it was a physical and emotional uprooting. While I was beginning the dream of owning a farm, I was a fish out of water. Martyn and I had a joke back then, when he'd drive off to his project sites back in Portland each morning, I'd stand at the door and say in my best Mayberry RFD twang,

"Don't leave me here without a gun."

Those were days of hard work and unrest, but each day there was the old barn, the land, the big top sky and the stars at night were our theater. I do remember driving around to try to get to the store thirty minutes away, thinking,

What have I done.

Change is unsettling. Change is powerful. Change brings so many new things into a life that one looks back and thinks,

If I hadn't had the courage to leave Minneapolis, I would not have met Martyn, and Apifera would still be floating, waiting for me somewhere.

So I was thinking about the fog, and how in our early days here, it was my blanket, and it still is. Unlike snow, it has less of a sound. Snow is a wonderful blanket too, but fog engulfed me, wrapping her arms around me on my farm with the raggedy fence protecting me from perceived wolves of my new environment. I have always gone to Nature when I felt the label of Misfit or weirdo being applied to me-either by another person, or by inner chatter. When I was six, we lived in what to me was the perfect place, a 5 acre plot with a carriage house that the main landowner sold us-so we were surrounded by his land, and there were horses all around and trees and forests. I had a grove of sumac and I'd disappear for hours, into my sumac forts-small rooms cleared out by deer-and I'd strip naked and lie under the sumac leaves, with the blue sky above streaming in when leaves blew in the wind. No matter where I am thrust or have to go to in my coming years, I know there will always be some kind of sumac fort for me-if I seek it out. Nature gives us friends all over the world!

Fog is as much a part of Apifera as the dirt or animals. But Apifera first and foremost was birthed from my heart. It can not be contained by land. It goes where I go.
Posted by Katherine Dunn/Apifera Farm at 9:21 AM

yes it does because apifera is in your heart. beautiful post.

I love how in reading your words, I can see paintings and when looking at your paintings, I can hear the stories ...

Such a wonderful essay on the power (and the challenges) of Change, Katherine.