Old Victor cohabitating with Only Duck 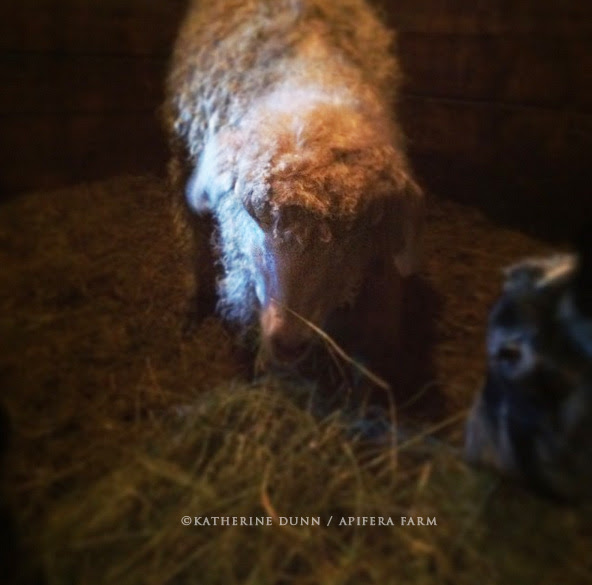 I thought how the light hit Victor's head in this photo last night made him seem so other worldly. Perhaps he's already been knighted by goat spirits and his body just needs to catch up. This morning I watched him munch hay, and all the other animals were out and about in other parts of the barn, chomping too. An eating animal is a content animal. I thought of all the animals I had sat with in that same stall–young lambs, dying ewes, broken hearted goats, lonely ducks, hurt roosters and still borns.
So the light on his head...I like to think of it has combined spirit dust saying,

It's okay, when the time comes, it will be okay, for him and you.

I made the decision to move Old Victor from the Lower Misfit Village to the upper barn. While there is dry shelter down there, there is just more opportunity to slip in mud spots. If you don't know Victor he was born with a defect that makes him crippled in the hind end, and now after years of compensating for that, his front end is weakening. He has been losing balance much more now, and landing in cold mud on occasion. I also noticed he is not able to move around as much in general, and getting to the hay breakfast is harder.

He and I had a heck of a time getting him up the barn, as we had to travel though Boone's paddock which in some areas is pretty mucky after the torrential weekend rains. He kept falling. It was sad, he is such a good spirited fellow. It took about 30 minutes to walk 300 feet, as we had to rest a lot because he just doesn't have the strength.

He is now cohabitating with Only Duck in a comfy, warm stall, and I carry his water to him to lesson his chance of tripping. I will be watching him closely in the coming days and weeks.

I sit with him at feedings, usually in silence. He is a personable creature and does enjoy company. His companion, Sophie, has tendered up a lot, and she has the same deformity but is not as crippled and is actually quite the little sassy thing, so she stayed down below. She kind of separated from him after months here–I see this over and over again, a pair comes in dependent on each other for safety and one is often more of a caretaker to the other, but in time the caretaker will often venture out as the surroundings become safe to them.

Sounds like a perfect pairing. Our lone rabbit and our ducks hang out together quite well. Sweet and yes, otherworldly photo. xox