New suite for her royal highness 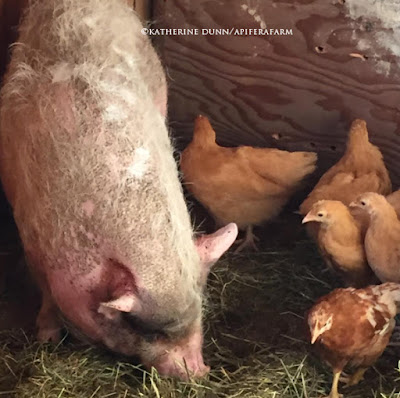 By the weekend, The World's Grumpiest But I Am Fine As I Am Pig aka Rosie will have a new private suite, without chickens. When we arrived in Maine, we had to simply jump in and make due with the layout of the existing barn. There were no fenced fields, or even paddocks. Rosie is beyond being able to live with anyone. I am not sure what happened to her a couple years ago, but she went from being grumpy, to being extremely grumpy and adamant that she wanted her own room. At this stage I am the only person who can work on her-and even that is like working with a crocodile.

Who can argue with her royal highness? I am not capitalizing royal highness because I in no way mean to infer anything negative about the many lovely people Queens and princesses in the world, both past and present.

Rosie is currently in a makeshift suite we put up in the center of the existing barn. I then had to scramble because I wanted to get some chicks in summer before winter because I can't stand not having fresh eggs. And, I can't stand being chickenless. So we netted the Rosie suite, and in they went. All was well for some time, but soon the chicks started pecking at Rosie's dry skin flakes. Not viciously, but enough I have to clean her and put Destin on her chafed skin-many of you know that since day one I have been nursemaid to the dear pig's skin. As a fair skinned lass myself, I commiserate with her.

The stall has suited our and her needs since May, but it is problematic. Her royal highness piddle collects on the wood floor, and she insists on dumping her water bucket-despite my efforts to hold the bowl for her twice a day with fresh water so she can drink, which she does, but she gets very grumpy if she is watched while drinking. I can relate to this too.

So, we have been working hard on the new barn, including getting the equine and sheep interior stalls up and ready for lift off! That also meant painting the wood stalls with No Chew-I hate the stuff, it is horrid but after the donkeys almost chewed down my brand new fencing in the old farm, it had to be done. Today we made Rosie's private suite. She'll have access to a private outside paddock too, which she currently doesn't have. In fact, at the old farm, when she decided she wanted to live on her own and took it upon herself to move to Old Barn, she never went outside again. This saddened me, because she liked a sun nap, as hard as it was on me since I had to lather her grumpy body in sunscreen everyday. I even tried to get her out, but she wouldn't go. I suspect that when Eleanor arrived, she maybe had had enough. She wanted to be the Queen Pig. So with her new suite, I hope she can have some sun days without worry.

I don't know how long Rosie will live. She will be nine in the spring which isn't that old. Martyn thinks she will never die. I have considered this–and I fear for anyone that might have to take her on if I die. She is a difficult royal highness, for sure. Not graceful like Grace Kelley, not pragmatic and stoic like Queen Elizabeth-she is her own pig for sure. I sometimes wonder why I tolerate it. To be honest, I have had blunt discussions with my former vets in Oregon, on and off over the years. Only one of my vets would work on her, and I can't blame them. We considered she might be in pain, but other things don't indicate that. We considered it might be best to let her take one long, final nap instead of hauling her to Maine. Oddly, what I thought would be hard on her-the actual 6 day journey-was not. She had her own traveling suite in the back of the truck and was not grumpy much the whole trip. In fact, she seemed to enjoy it. Perhaps she needs to live in the car-maybe the driving soothes her as it does many babies.

So, let us all hang a prayer flag for Rosie. Let us ask that she find pleasure, if not for minutes, even seconds, after she arrives at her new suite this weekend. And by the way, getting her to walk to the suite will be a challenge in and of itself. Stay tuned.
Posted by Katherine Dunn/Apifera Farm at 12:23 PM

Email ThisBlogThis!Share to TwitterShare to FacebookShare to Pinterest
Labels: Chickens, Rosie the pig, The Secret Sisters, The World's Grumpiest But I Am Fine As I Am Pig
Newer Post Older Post Home