I gave my love a ukulele 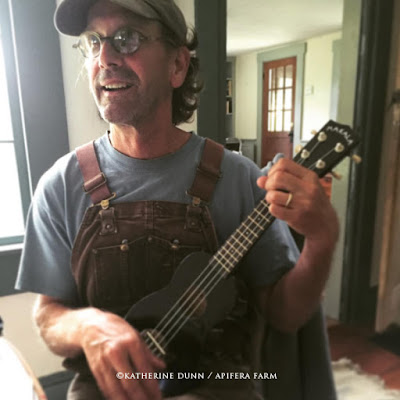 Martyn and I never, or rarely, buy gifts for each other. His first gift to me before we were married was a perfectly intact dragonfly, which I was over the moon for-a match made in heaven said his family if she likes dead insects instead of jewelry. But with our move to Maine, one thing I wanted to bring into our lives, especially as we age, our new lessons and skills. We had talked a year ago about getting ukes, but never did. So for our anniversary, I surprised him with two ukuleles-and I am so bad at keeping surprises but I managed to pull it off.  We are trying to practice an hour each night. The first song we are learning is "Always Look on the Sunny Side of Life".

Thirteen years ago I married Martyn. It is a day that was a turning point in my life, of course, my first and only marriage. You might know the story,  I was 45 and had left Minneapolis with a broken heart and wobbly but re-emerging healthy ego,  to move to Oregon without knowing anyone except my brother. I took flight after feeling called to the West, leaving my parents behind - a hard decision- and many friends I still love and care about. I found a wonderful bungalow in a village and the I planned to live there forever, it felt that right to me. The day I was moving in, there was a knock at the door. Those of you who know me well know that I am not a fan of pop-ins, at all, even Neil Young popping in might irritate me. But that day, I remember I was thinking,

Who is coming here when there is a moving van in the driveway? Don't they know I'm crazy busy and tired and look like crap {looking back, I looked pretty good, now that I'm 13 years older I can say that.}

A man put his hand out and shook mine, and said,

"Martyn Dunn. I had to come meet you, I heard you had the same last name."

My slight irritation from a pop-in turned to a warm feeling, a safe feeling. I remember thinking that I was really glad he was my next door neighbor. He wasn't a hipster or arty or anything, but he had this kind face and smile-I am sure if you read this blog you have seen it and would agree with that assessment. Embarrassingly [at the time] I also remember knowing I would be with him at some point. I didn't tell anyone though. not a soul.

A year later, we married, in the garden we built together at my house. There was other stuff in between there that brought us to our union [garish pitch-you can read it all in the illustrated memoir of our courtship Donkey Dream]. I have thought many times, I think if I'd met him in my twenties I might have walked on, I don't know though. I'm glad we met later in life because I was ready for kind not cool, honest not showy, authentic not excitement. But to say our life has not been exciting is the opposite of the truth. We went onto start a farm, raise 4000 lavender plants, fence an empire, raise sheep and care for old, crippled barn animals. We built a lot of stuff. We fixed a lot of fence. We cooked our own meat and vegetables and grew into our life in Oregon on the farm. The farm there and all that came with it created what we were best at-envisioning something together, expanding on it and jumping in building it. And now we are here in Maine, at 58, rebuilding another farm, another version of Apifera. I would not be doing it without him. After living as a usually content and full of life single woman, always living alone until I married, I wonder now if I would be happy again if Martyn died. A horrible thought. I don't want to think of a world without him.As one old timer said, after his wife of 60 years died, and he was still actively creating at 90, he sad, "The fun has gone out of it all, but I go on."

It's been said before by many-marry a good friend and I will second and third that. I rarely say when making introductions, "this is my husband," I tend to say, "This is Martyn," because that is who he is to me-Martyn.

He makes me laugh. Laughter is more important than anything. Commitment on top of that and an understanding that I am me and he has to be him makes a perfect pair. I never had it before, and I can't imagine ever having it with anyone else.

I don't believe in luck. I think we were brought together, after we both had other relationships to be part of and learn from. I wasn't ready for marriage even in my late thirties, I can say that clearly to you. I'm so blessed no-one married me!  I've learned so much about myself through my marriage-relationship are teachers-and I know he has learned a lot too and in many ways I've seen him blossom through our time together. I know I have added to his world, and vice versa. 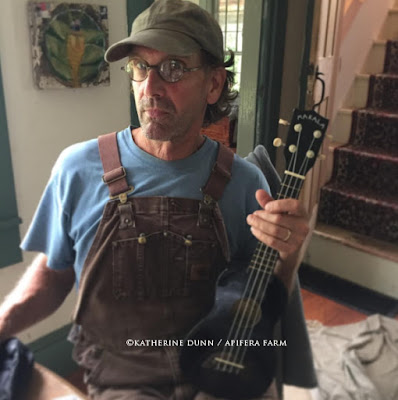 Email ThisBlogThis!Share to TwitterShare to FacebookShare to Pinterest
Labels: Love Story of Apifera, The Dirt Farmer

He looks good with his uke. A true love story. xox

This is a lovely tribute to a wonderful guy, and a most excellent partnership! xoxo to you both, and happy anniversary.

Yours is a beautiful love story, and my husband and I have one too. Such blessings.