Oh, Raggedy Man, I did not want to say goodbye yet 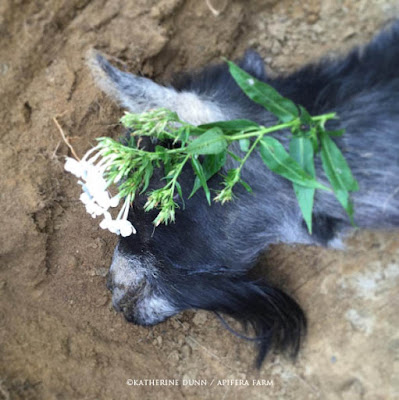 When I walked out to do barn feedings this morning, I knew he might be gone. When I didn't see him, I knew. Raggedy Man had lost weight some weeks ago and all my usual concoctions didn't seem to help much. He had other physical symptoms appear about three days ago and I knew in my heart he was fading.

I had found him yesterday morning separated from his buddies, and also in a very unusual spot for him, way off where nobody would bother him. I brought him back to the barn to gets some meds in him. He was off feed for the entire day. But last night when he and I spoke, it was clear he didn't have the energy to fight it. And his eyes had sunken. I had never witnessed it to that degree in an animal that was still alive. I'd been making sure he had fluids but I knew that was the death stare.

Over his body this morning, I cried for a lot of things, some things were about him, some things were about disappointments of the week. I told him what a wonderful fellow he was to have around, and oh I will miss his little raggedy feet and messy hair! He had charming smile too that graces many of my photographs. His beard was picturesque, and I combed it through my hands as I sat and mourned for him.

I dragged you all the way out here and maybe it killed you, I said to myself.

I felt his intention speak, But I wanted to come. It's just, I'm old. I died here with everyone I knew.

I know what's coming. More loss. Scooby Keith is also very thin, he always has been, he's fought off sudden illnesses so many times I wonder if he will live forever. Huck is also in dire straights as of this week and we are examining and grasping the unthinkable but unavoidable. This is the first of the creatures I brought from Oregon to die here on this land. It is not only a loss of a friend and creature, it is a second loss of the old farm. I know this. I have been through this with the grieving of my mother and father. There are many strings that are attached to the living, they don't all get snipped on the first day of death.

I buried him in an area near M'Lady Apple, where there is a natural piece of flat granite. When we first arrived here, I recognized it as a beautiful healing spot to sit, and planned to develop into a special place for me and guests. It is where others will be buried in time, but M'Lady will drop little red fruits at our feet in summer and beautiful delicate pink lowers come spring.

As sad as it was to say goodbye to this chap, I have to say there was some tiny little voice inside that came after I'd had a good cry,

Have faith in these new voids, we have plans. 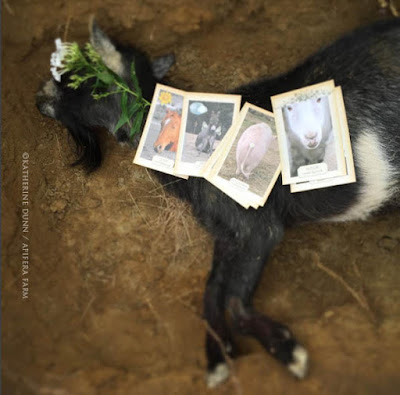 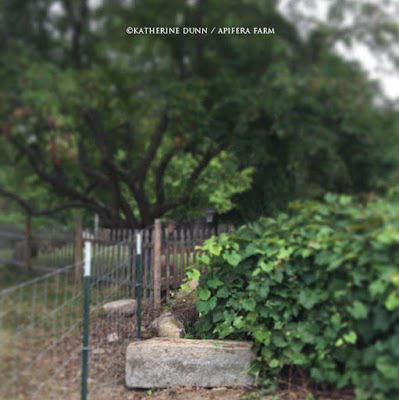 Posted by Katherine Dunn/Apifera Farm at 8:46 AM

I can imagine he also might add ... "and I want to rest here with you and watch the adventure unfold ..." So many wings, right? Like a swarm of moths these angels are with you all. Sending love ... and virtual wine and chocolate. Here's to Raggedy Man and the joy that he was and ever will be. xo

Goblin Farm is a little saltier with this news. Raggedy Man, even your name made me smile every time I read it. Dance in the Summerlands!

Katherine I've cried with you-these gentle souls-so bittersweet, the love they give and the void they leave. Raggedy Man will be with you on all adventures riding high on your sleeve and deep in your heart. xo to you both.

Thanks everyone, and to those who send comments endnotes via FB and email, thank you. I think many of you who have followed along for many years, sensed this passing was significant, in many ways. It is symbolic of a lot of things for me, difficult things I have to accept. And on top of that, he is missed. Thank you.

I am so sorry for your loss. This one struck deep. Sending you virtual hugs as the waves become easier to bear.