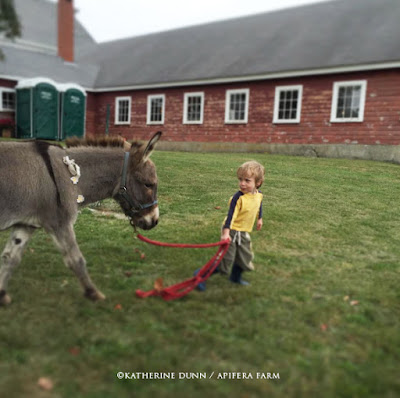 Pino has a been a healer since I first brought him to the old Apifera some ten years ago. I have shared many of the special encounters visitors have had. I have seen him walk around a group of people, slowly, and parking himself next to the person who came because they were having medical issues. I have witnessed his intuitive healing nature myself over and over, as he will appear out of nowhere to comfort me when I'm sad, or...perhaps calm me when I'm angry. He might need an entire book about him.

Bringing animals and people together, for mutual healing and respect, has always been my goal. And I am especially interested in working with elders, or the damaged, the sad, the lonely, with my animals to give them a lift, to bring some calm to them, a glimmer of home, or empathy. Touching and grooming an animal is a powerful, yet simple thing, and it provides not only bonding with an animal, it is soothing. I remember how my mother would stroke my hair if we sat on the couch together watching television, even as I grew into a woman. I always found it so soothing.

We became aware of Inn Along the Way, when we first arrived in May and instantly liked the founder. The Inn was once a working farm and stayed in the same family for generations. Instead of selling to a large well known retail chain, they chose to sell it to a group of people who had a vision. This group wanted to create a community for the elders who could live in small, simple but functional homes, and also have community, nature, and more of a farm setting. They are very interested in animal therapy. The group raised more than $500,000 to buy the land and buildings, and have an architect who has created the master plans. There is a beautiful old barn I would die for, and an old farm house to be renovated. It is situated near a wonderful little town so has nature, but is convenient. There will also be hospice caretaker cabins, respite cabins they are calling them.

So, we were asked to bring Pino, and my books, to their event yesterday, from 2-6, and we gladly went. They are now in the stages of having to raise more money-this is going to take a village, and lots of work, but I believe they are going to do it, and we are going to help, and Pino is going to help as are many of the Misfits!

The event yesterday was to generate excitement and also educate people about this concept of healthy and humane living for elders. There was old farm equipment that helped press apples into cider, and an old ice cream maker, and lots of harvest-apples, pumping and squash. And Pino met a new role model-large Belgian draft horses arrived. One of them was 2000# to Pino's 150#. It was pretty special.

But what was most rewarding for me and Martyn, was the people we got to meet that are part of the Inn Along the Way- the board members, and some of the family of the original farm and homestead. We have been invited to be part of the evolution of this wonderful project, and Pino and I are on board. I think it is going to blossom and evolve for us in many ways-bringing in elder facilities, working with art and animals, maybe reading days...I have lots of ideas to share with them. In the meantime you can visit their site -and donate if you are inclined. Or maybe you can generate interest for this concept in your area. Europe is so far ahead of us in this regard.

There was a little monkey named Thomas who was enamored with Pino and had a pretty full day of leading Pino around. Not all donkeys would have willingly been led like this, but Pino is such a natural. He knew he was dealing with a tiny one, and just did his job. Thomas was in the midst of potty training, and was very interested in Pino's anatomy, and how he pooped. It was pretty sweet-Pino can be a role model even for bodily functions!

When we got home, we sipped our wine and sat by the fire. I felt like I had connected with some people that I could be comrades with. I felt like Pino and I can make a difference there, and also have a community. I felt like Martyn can be part of it too, in so many ways.


Posted by Katherine Dunn/Apifera Farm at 8:00 AM

Email ThisBlogThis!Share to TwitterShare to FacebookShare to Pinterest
Labels: Animal therapy, Inn Along the Way, Pino

Fun Pictures!! so excited for you, Pino and the other Misfits...oh and for Martyn too! can not wait to see how you work your magic on them :)

It was certainly my favorite part of the day.....meeting you & Martyn & Pino.
I will look forward to the next time we meet. Your words & photographs really capture 'the essence' of what InnAlongTheWay is all about. Thank YOU!

Thanks, Debbie! We will see how it unfolds ...a mystery! Zina, loved loved meeting and talking and look forward to getting together soon!