The Secret Sisters and Francis 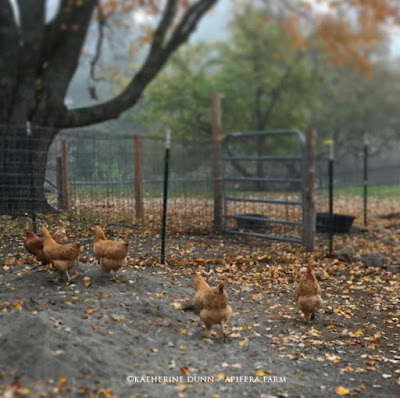 I have been meaning to write about the chickens. In June, I was chicken less, having left my flock at the old farm with the new owners. I was sad to do that, but taking them on a six day journey would have been risky in the heat, and each one would have had to have an ID implant-which all the animals had to have for travel. I had names for every one of them, and know they were better off staying there. But...I had my favorites, and think of their faces a lot.

So when we got here and were chickenless, I could hardly stand it. A farm without chickens is not a farm in my book. I had to buy eggs and it nearly killed me-I'd wonder,

Were they happy chickens who laid the eggs?

I decided to get some adult hens since it was already June and brought home some 5 week old Buff Orpingtons, one of my favorite breeds for their personality. Since we weren't totally settled, I opted to only bring 5 hens home, and a rooster.

Upon arrival, the new flock had to live with Rosie in a stall we had created for her majesty. I learned it is best to keep the chickens in an area for a long time, until they lay, so they know to come back to the roost after a day of free ranging. And since there was no adult mamas to guide them, it was the best way. Eventually, to the delight of both chickens and grumpy pig, Rosie moved out to the new barn, leaving the chickens on their own. Every morning I'd come in and there was not a chicken sound to be heard. They were the least chatty chickens I'd ever had.

"Are you there? Are you dead" I would ask upon arriving. No answer.

At some point, I thought they were dying, or just not right. And then I thought they were depressed. Even though they were not laying yet, I let them out for a day. But it's complicated. The set up made it hard to get them into the front barnyard with the pigs where all the good worms were.

So, I devised my scheme. Feed and slop the pigs, and open their door wide so the chickens could come in. At first, it took forever being the chicken patrol guard, but Francis the rooster and I have it down now. He is turning into a fine roo, protective, but not aggressive with me, even tolerating being held. And he's a real looker too. The two piglets were a bit perturbed with the hens, and went after them. Since they are carnivores, I did spend time to make sure I wouldn't find a headless chicken. But it all calmed down, and now we have our chicken routine down.

I call them  The Secret Sisters because they are not like the Buffs I had in the past, they are quite secretive {I also happen to love the girl band of the same name}. They have not shared a lot with me, and maybe that is okay. There will be more chickens to come next spring. For now, I think it is jut fine they are a clutch, with their own stories held closely to the vest. In this day where everyone seems to share everything manically online, I felt it was nice to have chickens with such tight boundaries.

Chickens with secrets...there must be some good stories there.

Every day now, I wait for the first egg. And yes, the cold is coming, but I would assume there will be a few popping out even in winter. We shall see. 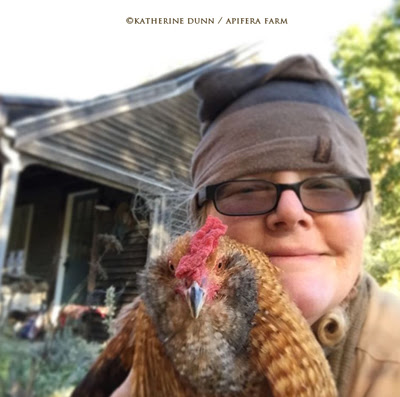 Posted by Katherine Dunn/Apifera Farm at 11:04 AM