I never knew Rosie as a piglet. I would have loved that though. There was much wondering what in the world made her so grumpy. Some of my old vets said they found most Pot Bellied Pigs disagreeable. My Kunekune pigs are the sweetest, all with unique personalities, but none are grumpy.

Rosie started her piglet life in a house, with an elderly woman in southern Oregon. The story is that she had her own bed and room and was pampered. When the woman died, Rosie ended up at a shelter and then was sent to live at Sanctuary One. There, she began her reign as a very grumpy pig. And that is where a very crippled goat named Stevie became her only friend, or only animal that would tolerate her grumpiness. Eventually, they both came to live at Apifera in Oregon. After about a year or two, Rosie began sleeping away from Stevie, and eventually, she was independent of the entire barnyard, after she told me clearly she liked living in Old Barn, on her own-although she had the company of sheep and donkeys and an occasional rooster walking by her suite.

In Maine, Rosie has taken a slightly less grumpy posture on life. I said, slightly. She is still grumpy. But after a few months here, and after her permanant suite was prepared for her with her own private outside yard, she began to lighten. And she began to greet me at the gate for breakfast-that was unheard of. Now that the air is getting cold, I find her in her suite at dusk, in straw, but I take time to gather more for her and cover her entirely. She grunts and snorts with,

What are you doing? Oh, fine, hurry up then, I'm sleeping.

It amuses me and makes me feel good to cover her like that-like an old lady unable to fully undress and redresss for bed, but she is very happy once I do it for her.

So I wonder what the little Rosie was like as a piglet? I can tell you that she must have had moments of pure innocence, and quieter, happy grunts. Either way, if you adopt this creature doll, she will require her own suite. And a blanket. 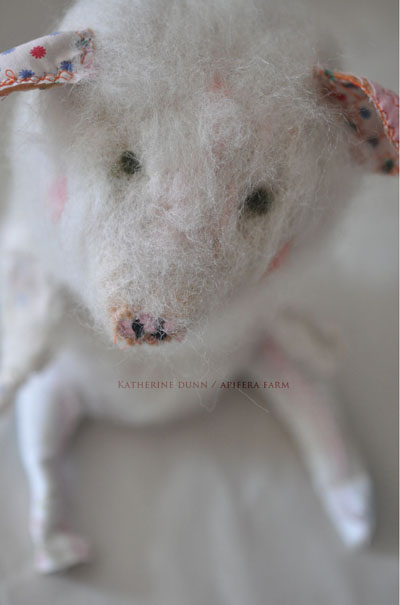 Posted by Katherine Dunn/Apifera Farm at 9:37 AM

Email ThisBlogThis!Share to TwitterShare to FacebookShare to Pinterest
Labels: Doll/Creatures, Dolls, Rosie the pig, The World's Grumpiest But I Am Fine As I Am Pig
Newer Post Older Post Home