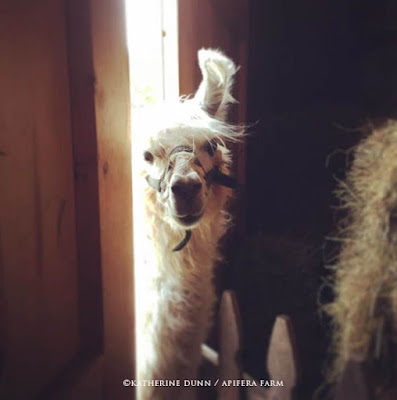 Birdie popped her head into the barn the other morning, while I was finishing some cleanup of hay spread by sloppy chewers, and then she departed as quickly as she had appeared. I took this to mean she was just letting me know she was getting out to the field again. the flock comes and goes from the larger field this time of year, they get to eat there in the day and the equines eat there at night. This time of year rotating fields is even more important with the grass beginning to fade.

I didn't think much of it. I had to water the vegetable garden so followed her outside and there she was, standing with the small flock, calmly. White Dog was already out doing his daily periphery check of the fence, his morning obsession and of course his job.

I stood and watched.

You know I have a vivid imagination–we aren't a Disney movie but I have many moments in my life including when I didn't live on a farm, where the scene in front of me comes with a soundtrack, or maybe another way to look at it is I am always seeing scenes as story with sub titles. Every minute of the day can be a story. I get great amusement out of my minute by minute stories here on the farm, or comfort, and sometimes even clarity about internal struggles. The animals I guess are conduits of perspective just like a good Shakespeare play.

The sheep had gathered at the newly opened gate, saw Benedetto had run down to the bottom of the fence line to make sure there weren't any prehistoric elephants or bears and they began to gather themselves into a tidy line, just like I used to do as I entered a subway car in Manhattan decades ago, preparing myself to get in line to get the seat to get to the office.

But it wasn't until they were in a tidy line that Birdie turned her head to them, ever so slightly but deliberately and if there had been a sub title in a Disney movie, she would have said,

And as I turned to go back tot he house I heard the faintest voice of the smallest sheep voices call out to Birdie,

"Llama! Look, I'm fourth in the line today instead of last!" 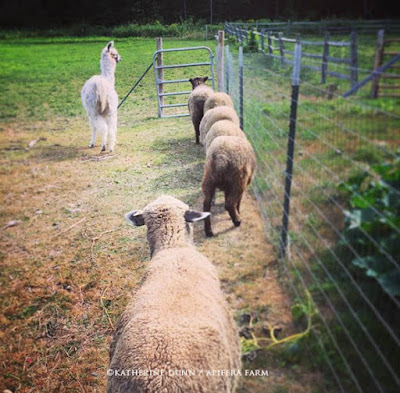 Posted by Katherine Dunn/Apifera Farm at 9:07 AM

That put such a smile on my face today! Thank you! Way to go, Little Sylvia Pettini!