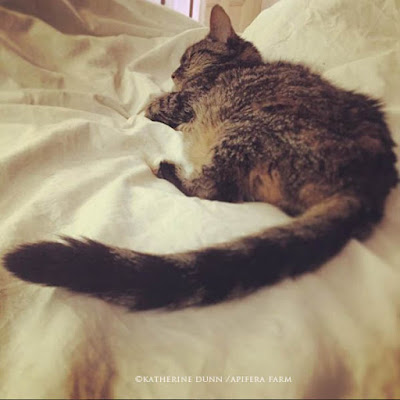 We had a sad goodbye last night. A thunderous one we knew was coming.

Big Tony was ready to take his solo walkabout after being with us all these many years, the father of so many Apifera cats. He lived a long life of twenty, eighteen with us.

It is a poignant death for us and it seems to come at a time when we're being reminded almost daily that life does not sit around in the past, it moves forward, and with that forward motion comes many things, including goodbyes. Tony had a magnificent life, let's not forget that. He arrived at the old Apifera, sauntering by me one day when we had first arrived, he barely acknowledged me and seemed to have no motive for being there-he was just cool as a cucumber. It was at the same time we discovered kittens falling [literally] from the hay bales. I set out to trap the kittens when they were old enough to be spayed and neutered, but could not catch the elusive mama. She would have another litter in short course, and it was only then I could catch her too. All the cats lived out their lives at Apifera, most living past ten.

But of all the cats I thought I'd catch first in the trap, I never thought it would be that big old tomcat. I had only seen him a few times, he came and went, but when I went out the first day to inspect my trap, there he lay, completely content sunning in the cage, his Star Kist tuna fresh in his belly. After we brought him back from the vet a day later, I let him out in the barn. It was only a matter of days before he started coming to the front porch. Back then, it was pretty wild and au naturelle at Apifera, we had no screens and bats, raccoons and birds would often find there way into the summer living room. So I guess Tony figured out it was a friendly place. I first brought him inside one night while Martyn sat watching television, figuring I'd warm him up to a cat in the house. Martyn had asthma and said we could never have a cat in the house, nor did he want one. Within a few days, Tony was sitting near Martyn on the couch, enjoying PBS News Hour. Big Tony was the icebreaker for the man who didn't want cats, and in adored a one pound kitten named Itty who slept under the covers with him. He also adored Tony, everyone did who knew him.

When he went to the vet-which was often in the early years-the staff would do their best Tony Soprano impersonations and yell out,

We called him the Millionaire Dollar Cat back then because he had teeth work and stone work done, once leaving him in the hospital for ten days-donations from my followers helped me pay those bills, as well as spay/neuter and care for the clan of twenty five cats that lived in the barns.

Tony is a survivor. How many semi feral cats get to live bi coastal in their life-and let's not forget, he saw America in that six day journey across the States, while piglets slept under his perch.

Tony is symbolic to us in many ways, much like Huck was. He represents the beginnings of the first Apifera, the energy of the beginning there, and all the serendipity and magic that just happened by opening the front door. He fathered at least 10 cats, but for sure more. In fact, we think Samuel Noel was related to him.

Tony tolerated everything-vets, young kittens, puppies, goats, chickens...he was a cat's cat. He was not cloying, he was not a lap sitter. But he liked his people, and he liked our company. We encouraged him to get a paper route because his special food we had to buy him from Canada was $58/#18 bag. He never took us up on a part time job, but he was really good at retirement. As he aged, he softened even more and began to talk more, not a lot, just greetings at night in the bed. He began to sleep on my pillow, above my head at some point, and it required me to get more pillows for my own comfort. After we moved to Maine, after we suffered the jolting, unexpected loss of Itty who chose to stay behind, I found great comfort in Tony. At night, he would still sleep above my head, but I would find him with his head laying on my hand, and sometimes I'd sleep with my fingers wrapped around one paw. I told him back then, a year or more ago, when I was struggling through the story book I was creating about Itty, a painful time for me,

"I should be writing a book about you. You're still here." He responded with tail swishes-real slow and graceful swishes-and non blinking eyes.

he had a beautiful colored nose. I had tried to capture it by mixing up my paints, but never really captured it. Somethings can only be seen as they are in real life, not through a lens or a palette. How many mornings did I wake up and see that beautiful copper colored nose, the color of an autumn leaf not quite fully browned from age.

We knew this week we would have to put him down, but gave him some time hoping he might just fall asleep. I of all people should know better. As his conditioned weakened, we made the drive last night to help him on his way, not wanting him to have seizure or any discomfort.

I took these photos of him yesterday when we knew it was our last daylight together. He used to be a twenty pounder...His face showed a cat ready to rest eternally. His hind end had become very weak in the past days, so I carried him from the bed to his favorite basket. Muddy joined in, and Hughie came by too-it was not usual for me to be there in the day where we gathered at night, but they knew this was one of those occasions where quietness is preferred and something momentous was occurring, but this something was okay.

It would be okay.

I took another photo and when I looked at it, it was so beautiful, like the light I had let come down into the lens made his body begin to fade.

I'd been telling him all month, if you see Mama Kitty, don't worry about us, just go. I like to think of him and Mama reunited. This is the human in me. He might be doing nothing, or other things that are non of my business. When we used to get up in the morning, he'd have his breakfast, and then head out to the porch, where Mama would appear from the garden, and wrap her body and tail around him. He never showed affection to her in the same way, but he sat with her, and let her wrap around him. And she never allowed anyone to touch her, in fact, hardly anyone had ever seen her but me and Martyn.

Right before he went under at the vet's last night, I said two words to him, 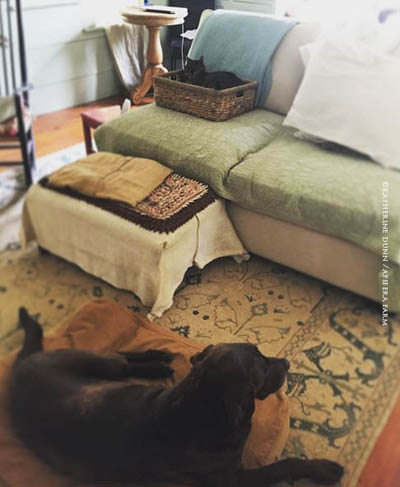 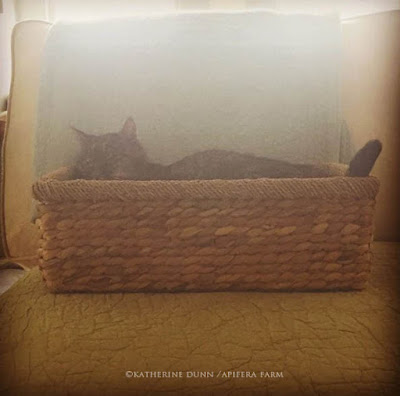 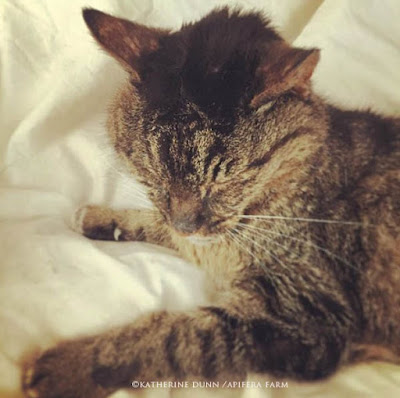 Posted by Katherine Dunn/Apifera Farm at 10:53 AM

He looked so much like my dear Max who left 8 years ago at 17 - though it feels like yesterday. He threw a clot a year or so before so had to walk with his right wrist. The vet said that was fine if it was ok with him. Without the details of that final day - we had to take him to the vet. Gene held him and I was asked to leave....perhaps better he not see me that way. He began as a Christmas Eve kitty from the dime sore pet shop. The store was closing and his litter mates gone. So he rode home on my shoulder.
I think maybe he is still there.

I too had an old cat that just faded away like your Big Tony. Emily was 21 and very loved. She was definitely the matriarch. On the last day, all our other animals became very quiet and I think reflective. We have moved recently and I miss her little grave.

It's the end of an era for you and I'm so sorry. But it's also the beginning of an era for Big Tony. Thank you for letting the faceless us into your life with Tony. I'll light the candle for him tonight.

It is so sad to lose poor dear Big Tony but he had a king size life full of love and attention.

such a sweet account, and what lovely pics you have to peek at from time to time and remember. rip big tony, and hugs to you.