I was minding my own business and.... 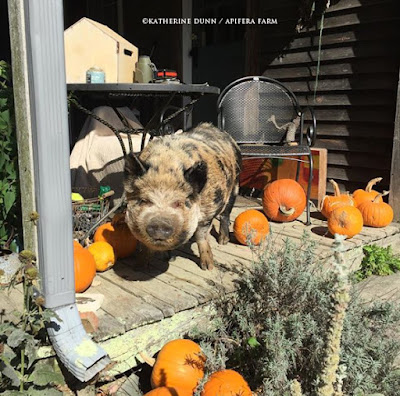 So you know how it goes around here: I was minding my own business, really I was, up in my studio. I was actually....painting. Now to set the scene, my studio is above the living room which is next to the front deck. I started hearing some movement downstairs, unusual movement. We have had squirrels in the gutters so I thought it was most likely that.

But then it began to sound like someone was dropping bowling balls.

I better investigate this.

Upon arriving downstairs, there was Muddy, and Hughie looking sort of...odd, in the dining room.

I could hear the sounds again. I thought maybe somebody was in our yard and headed for the front door.

And then i saw it, and it was quite the site.

A mischievous twosome greeted me-Earnest and his pal Marcella, the local escape artists. Actually, I know Marcella started it, and when I went to their paddock I saw where she had begun to dig a hole under part of the fence. This allows Earnest to get his nose under-a pig shovel-and push up, under and out.

I have to say, no harm was done, no lady pigs were nearby, thank goodness, and the expression on his face as he was trying to get a hold of a rolling pumpkin made me love him even more.

The two escapees are now locked up in their suite, happily eating pumpkins, until I can get boulder by the fence. If I'm ever in an avalanche, I hope I'm with Marcella and Earnest as I think they can get out of anything.

Now all together now, let's say it: OH EARNEST!
Posted by Katherine Dunn/Apifera Farm at 11:08 AM

lol, life on the farm