When you fall down, you have to get back up 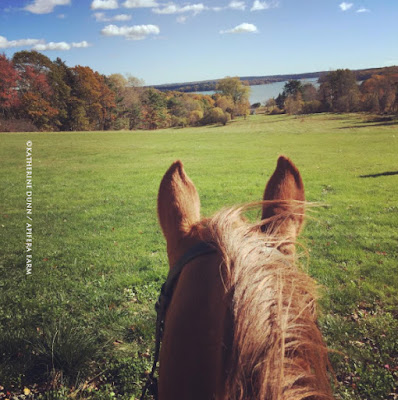 It's been a tough riding season for me and Boone. We had a couple rides into the summer and then we had our accident on June 27th. Since then I've ridden twice, and one ride was aborted because the flies were so horrendous. So on Friday Boone and I ventured out on a beautiful day, and I'm happy to say, no flies.

I have had to admit that the fall and concussion took the wind out of my sails, and played with my head. Boone is a stoic guy, and after we got over our first year together-where he was testing me-and we got some help and good riding buddies-we soared.

So when I got on him the other day I can't say I was scared, but I had thoughts creeping in my head. The day we set out to ride on the accident day, it was beautiful too, and I had a lot of plans for the upcoming day so was thinking of that. I remember lying in the hospital thinking, it was such a nice ride, such a beautiful day...it all happened so fast.

We rode on a trail I've been given permission to ride on and it was all just fine. I decided to go back to basics, doing a lot of deep breathing to get my seat down in the saddle, practicing our stops and starts, figure eights, playing with going over logs...there really was not one glimmer of anything bad about to happen...just like on June 27th.

That's how it plays with your head.

There was a time when I thought that maybe I should just do ground work again, and no more riding. But...I love my rides. Was a ride worth hitting my head again? So I am not sure if I will canter again, alone, not on the open trail. We were cantering when I blacked out, it was the last thing I remember...cantering along and all was well and I remember thinking it was time to slow to a walk as I saw ledge rock on the upcoming path, which is slippery. Each time we came to a ledge rock on our ride last Friday, I took notice, and I'm pretty sure that is what happened, his shoe slipped on it and he went slightly forward and so did I, smack into his neck which explains my busted glasses and bruised nose bridge. The fact I had a very sore inner left thigh, but also had not one scratch on me or no signs I fell on the ground, says to me I slid off, or went off to the left as he was righting himself back up. God, we were lucky in so many ways.

I told Boone on this ride it was good to be on him again, that I had missed him.

I think we will regain our fearless days-but perhaps our rides will be at a walk from now on, I don't know.

And it was a beautiful day.
Posted by Katherine Dunn/Apifera Farm at 9:09 AM