Earnest...and the giant pile of a rat tunnel 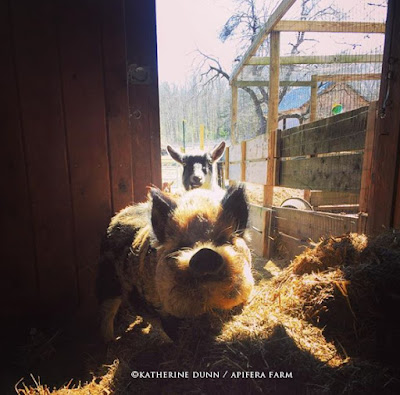 A couple times a year, I clean out the entire stall where Earnest, Goose, Moose and Wilbur live, and Marcella and any other visiting or wandering guests. I don't do what is called 'deep bedding'-where layers of straw over time create a thick matt that is left to soak up urine and still leave dry surface for the animals on top. But over time, the straw I put down in one winter for the animal's warmth breaks down, and becomes dust, eventually matting when liquid gathers through it over time...and you get thick layers of compost. It also becomes a perfect environment for rats to tunnel under the thick matted surface.

Rats, as in...rats the rodents.

I adore rats, and mice, I really do. We have the absolute best place for rats, we are a rat mecca, a holiday oasis for any rat. We have marsh out back, and feed in the barns. We saw rats the minute we moved in, and were actually entertained by them as they ran in and out of their tunnels. The front barn is perfect for them, as it is post and beam making it easier to escape under the barn. But they have also been making tunnels in the thick under layers of the bedding in both stalls. When I was cleaning the pig stall a few weeks ago, I could hear baby rats under my feet. Don't worry, they weren't dying by my feet, they were fine, and soon after we saw the young population taking over the chicken coop for hen pellet...I'm talking about 20 rat at once. I didn't dare post the video.

They also started to take over the feed room, even though all the feed is secure in big buckets, they began to eat anything of cloth-like my lead ropes that might dangle down to the floor. They ate some leather reins. If I have plastic sacks of old cat food cans from the elder cat suite, that have not been taken to the dump, they get in there.

I now can be working in the barn and a rat will run by me, or peak out of a hole in a tunnel. Last night Benedetto was pouncing on some as they ran by him, and they ducked into one of their many tunnels by the barn, but as he stood there greeting me, the rats came out and were casually looking for pig pellet under Ben.

I really love rats. I really do.

But it has become a real problem. They can carry disease. We have been trapping them, maybe one or two a day, in the feed room. I hate traps but I didn't want to do poison. But we are winning the battle.

It is really getting out of hand.

So I consulted with a few farm people, and a person I really respect who works at the feed store and has animals. If I don't want to shoot them, poison is the only way to get them under control. I do not like this alternative. I believe in a quick, humane kill, and poison is not, I don't think.

Rats can carry disease, especially in this size population. Everyone, everywhere has rats. They are survivors. But they are very destructive. It is only a matter of time before they start eating the eggs, and electric wires. Some of the adults are huge. The trick is to put the poison in their tunnels, away from the other animals. I will not put in in the chicken area, or the pig stalls. There are tunnels out front and I will start with that. The people I spoke with say it is a fact of life here, with all the water, and it is not a one time fix, it will be a maintenance issue.

I'm not happy about it, but we have to get control of it.

Posted by Katherine Dunn/Apifera Farm at 7:02 AM

Email ThisBlogThis!Share to TwitterShare to FacebookShare to Pinterest
Labels: Earnest the pig, Life on the farm

There is the "Ratenator" trap. they go in, can't get out then you or somebody drowns them. hard to do but better than poison.Not sure on spelling of trap name.

We have looked at trapping, trapping with electrocution, poison in tunnels only , and we've been doing regular traps. The problem is, we have 100's. Trapping a small colony is one thing, we just don't think we will get ahead of it. I think, personally, drawing and poison are both tough. I've witnessed poison, but this poison I guess is pretty 'fast'...it's all making me sad. Believe, me, I've suffered in this decision...still analyzing though.Thanks Debbie.

I've had pet rats and mice all my life, i love them.... But, when they took up residence with our animals, and then over our house, and got into the walls, gnawing inside the walls with our wires, even I finally resorted to poison. We had a company come with "bait boxes" ~ so only the rats can get in and eat the poison. It was a monthly service, after about 6 months the rats were gone, however they smell of them where ever they died lingered on for a year... Sad, but it was getting out of hand, and it had to be done! Good Luck ~ :)

Thanks for sharing Melody! People have no idea how destructive they are, especially in the numbers we have. This morning I opened a feed bin and there was a rat looking at me! I love rats, and mice too. I have not used the poison yet, but we are going to have to. We still are trapping, all sizes, but about 2-3 a day. They ate through the plastic in one of the feed bins, it is only a matter row time they eat wires and burn the barn down. I'm nervous about it, but I have to look at the lesser of two evils.