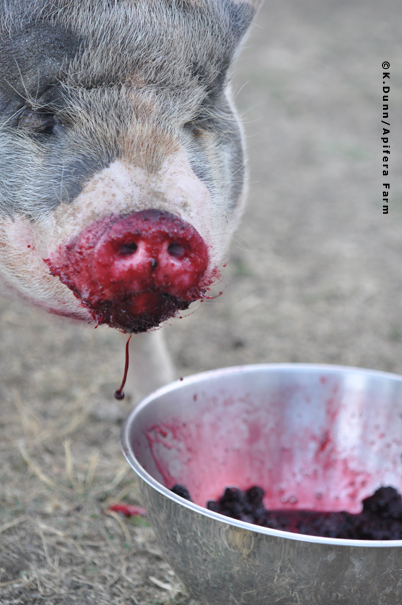 If you had told me way back when I first brought Rosie home that a] she'd live this long, and b] I was going to drive her across the country from Oregon to Maine at some point, well, I might have pig snorted.

When we first arrived in 2016, Rosie continued to live in the truck bed in her private wooden hut, and for about two weeks wherever we went–to the hardware store, or out to lunch–people would be curious what they heard in that truck bed.

So today is her tenth birthday.

{Do you like the stories and work of Apifera? Consider a small donation to help offset the adopted animal care}
Posted by Katherine Dunn/Apifera Farm at 6:53 AM

What nice stories about Rosie, your grumpy pig and big presence on your farm.

Rosie stories always lift my spirits ... needed on yet another snowy day (in April! I know, I cannot complain but ...)

I wonder if Rosie might imbibe in Rick's home brew? Maybe she is just a beer connoisseur? I laugh out loud whenever I read your stories about her and her epic snorts and squeals. Gotta admire a girl who is so unabashedly Her Self. Something those of us raised to be "polite" and "not to make a fuss" can learn from. Will raise a glass to all tonight in celebration. xo

Thanks guys. And for the record, Rosie is older now and pretty arthritic, so i can actually get her toes trimmed-although, she sounds like a wildebeest and I wonder what nearby neighbors think it is.