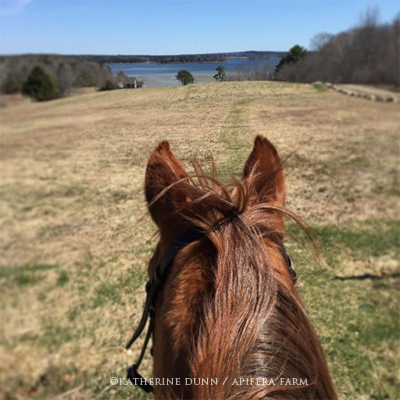 Boone and I went for our first ride this season. It was a short mile ride but I wanted to test him, and me, out. I can't say I was scared [if you are new here, Boone and I had a bad accident last June landing me in the hospital a couple days with a concussion], but I wasn't necessarily in the zone either. I wasn't rigid, but we were rusty.

I focused on one thing, my hands, aiming to keep my cues as soft as possible. Boone is a desensitized horse from all his early cow pony days, which has its benefits. I'd rather have that than a high flight risk or spooker. It felt good to be on him and I think he enjoyed getting out too after being cooped up in a paddock all winter.

But what I noticed is...I felt sad afterwards, not because of the ride, or even the past accident. I pondered it all day and decided that I really miss my friend Joanne who died last year. I met her about six years ago, when I started riding at her barn and property of 300 acres back in Oregon. It was one of the saddest goodbyes for me, when we left. When I met her, I had had Boone for a couple years and we were working through some issues-i.e. he was playing with me and was winning. I was not a good leader and lacked confidence. Someone suggested I go ride at Jo's and it was a life changer for me and Boone. We'd ride all winter out in Oregon, and Jo even encouraged me to take dressage lessons with her, which I did, amazingly. That was very worthwhile. Boone and I went on to ride in a parade, get some blue ribbons at school shows, go to the ocean, and do some tough rides in the woods too. We overcame his fear of 'squishy' ground [he's sunk in quicksand once as a cow pony and was freaked out by the sound of squishy ground below his feet] and I overcame my reaction to his fear. I became a good leader. I was really proud of him, and me, and I have Jo to thank for a lot of that.

I realized too that not only did I miss Jo and our rides, I missed our conversations, and I missed the type of conversations we had. We had an easy flow conversation. There was no interrupting, we could engage in all sorts of issues and I never felt judged, or belittled, I never felt I wasn't being heard. When she talked I listened, and vice versa. I felt she respected my experiences in life, and I respected hers.

I never felt like she was talking at me, or over me. I never left the conversation feeling like I'd been run over. Do you know people like that-when you get done with a conversation no matter what the topic, you tend to feel 'flattened out?" Kind of like your big bossy sister came in and basically told you what do, or told you what you might consider doing even though you had not asked her opinion.

I took a business seminar once on communication. One thing that came up was when we listen to someone else talk, and then we answer with, "But don't you think blah blah blah," what we are really saying is, "Yea, you just spent time telling me your thoughts and even though it looked like I was listening I really have to tell you a better way to think about this." I was quilty of this, it was a good lesson. I don't think we are perfect at communicating, it is a life long pursuit, to become a better communicator and listener.

I guess there are people in life that just do not mesh with our personal conversational styles either. But I don't like to be 'talked at', or patronized. We have an ongoing lesson in our house, we try to remember to use 'periods and commas' when we speak [we often fail]. Anytime Martyn and I are going to be at a gathering, when we get out of the car, we remind ourselves to use periods and commas. We had a house guest some time ago that had an answer for everything, even things they had far less skill in than we did. At one point after a couple days of exhaustion trying to listen all the time, I leaned over and said something to Martyn, and the guest said, "Okay, don't listen, go ahead and interrupt me." I pointed out that it wasn't that we weren't listening, but he never stopped talking so there was no chance to interrupt.

I guess I realized after my ride that I'd been having some 'conversations' like that with people. No periods or commas, no acknowledgment of my past experience that might bring some clarity or interest to the topic at hand. I was consistently leaving those conversations with he same people feeling...slapped.

And it made me miss Jo.

But it's okay. Boone and I will ride on. I have a person I'm going to call to see if he and his wife might ride with me sometime, just to get me and my head back in confidence mode with Boone. He lives a ride away, and he said he'd ride the same trail Boone and i had our accident on. I want to do that.
Posted by Katherine Dunn/Apifera Farm at 10:33 AM

I'm glad to hear that you and Boone are back in action. I've been thinking of the two of you,wondering how you were getting on after the accident.

I had a fall from my own boy last summer and dislocated my shoulder (for the third time...all horse-related!) and for the first time in my 40 years of riding, the thought crossed my mind that I wouldn't be able to get back on. But I did. It was daunting and for the first time I was...not scared, but apprehensive. Then he dumped me again this winter (thankfully I landed on the other shoulder!) and that REALLY rattled me. But we're still together...working out the trust issues that have now developed! I'm hoping to muster the courage to take him out on the trails again....but will definitely be waiting for a trail-buddy! (He isn't naughty, rather he spooks at odd things and does so in a way that defies the laws of physics :))

I did a workshop recently that was concerned with communicating with young people in crisis....one of the things that came up was that any response to someone's statement/story that starts with "But" is completely invalidating, no matter how well-intentioned the follow-up. It's difficult to remember that sometimes, though! I very much like the idea of using periods and commas.....xo

Thanks for sharing your story, Mel. And geese, that stinks. I guess as we age [I'm 60] we also know that things take way long er to heal, way longer...so it gives one pause. I hear you-I was not afraid, but was 'thinking', apprehensive. I guess I'm grateful Boone is so stoic, and I fell at the canter, so I found myself the other day thing, 'maybe i'll never canter again' which is sad because who doesn't like to canter? I'm glad you are still at it. I think too there are many ways to partner with our horses. In the end of his life, my dying of cancer 62 year old Uncle, a horse whisperer before we had heard the term, still worked with his Arab stallion parade horses. he hardly rode, but he didn't give up, he worked in other ways with them...That is a great point on the use of the word "but". I guess you can add starting a sentence with, "don't you think," "You know what". ..I sometimes get confused because we want to share similar stories in conversation, but there is a fine line between sharing and adding to someone's conversation, and ploughing over it....we are works in progress I guess

Wonderful post- you describe so well the difficulties in communicating with one another. The phrase that I hate to hear - "you should...". Just shuts me down.
Hope you and Boone travel well together,
Mary