Memory of the concussion 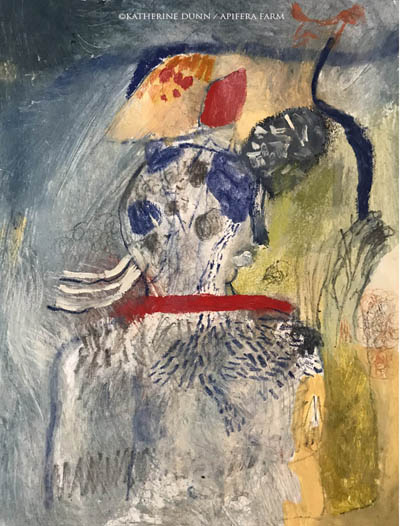 {From the studio this rainy morning, "The Day I Fell of My Horse and Blacked Out"]

It's coming up on two years when I took a bad fall off Boone, alone in the woods on a ride, hitting my head, blacking out and proceeded to walk around for 30 minutes not knowing where I was [yes, I had a helmet on, always wear one]. It turns out I had called Martyn 10 times that 30 minutes. He saved the messages and I only knew I had called him after I got out of hospital. The messages are heartbreaking. I was scared, and unable to tell him where I was at first. I was in the forest, and could not tell which way I should go. My horse was gone, my glasses were broken and my nose bridge was cut. The messages were so hard to listen to, it made me want to hold me like mother and child. I can only imagine how poor Martyn felt, hopeless I'm sure. At some point, I wandered out of the woods, and was able to call 911. Boone had gone down the busy road and a neighbor took him in- it's a miracle he wasn't hurt, or so many things could have gone wrong. My theory is we slid on ledge rock, as we were cantering and the last thing I remember [it had been a wonderful ride]is 'it's time to go into a walk, there is some ledge coming up" My head must have crashed down on his neck rising. Oddly, I had not one scratch on me, not any stains or anything on my pants or bare arms, only a cut nose bridge where my glasses hit the horse. Boone had a few scrapes. I wish I knew what he did after-did he look at me and think, "Well, she clearly isn't going to lead me out of here so I'm leaving'...or did he stick around and sniff me, or just fly off?

To this day the only thing I remember is that last thought of we need to go into a walk from canter, and I do now remember being disoriented, scared, and not knowing which way to walk on the path-each direction looked the same.

I had a severe concussion and spent two days in the hospital. They made me stay to see if I needed surgery. Surgery? I told them that was ridiculous. I was still pretty out of it and Martyn says the surgeon said it was a pretty severe blow so I'm lucky. He said without the helmet, who knows. I got back on Boone a month later, but I will be honest and say the event changed me. I am not afraid to ride, but riding alone in the woods gives me pause now, which is sad. But I never want to put Martyn through that, or my horse, or me again. The thing is here in Maine the woods are so miserable starting about late June if not sooner due to the bugs. It's unpleasant for horse and rider.

Today was going to be my first spring workout with Boone, but it's raining. So I made this painting.
Posted by Katherine Dunn/Apifera Farm at 11:05 AM

Email ThisBlogThis!Share to TwitterShare to FacebookShare to Pinterest
Labels: Art, Rides with Boone