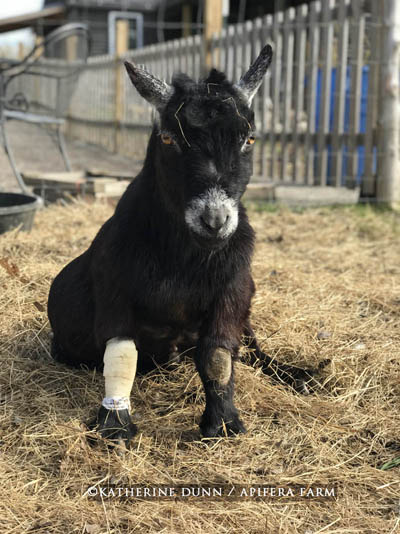 The vet is coming tomorrow to give equine annual shots. I always have my vet do the equine shots, I do everyone else but just don't like doing the equines.

The vet will also help me choose the next steps for Tripod. Tripod was born crippled, with a hind hip and leg that are permanently frozen making him only able to use three legs. But it also compromises his body in other ways, and we knew as he aged it would be more and more problematic. And that day has come. This winter, I was able to keep him from getting elbow sores, since he was lying down all winter. He was not getting other sores and I thought we had jumped that hurdle. But then he got a very bad sore behind the elbow, in the crease and it is not healing. Bed sores are real problem for elder, crippled animals and at some point you are fighting an battle you can't win. So we were struggling with that in the last couple weeks. But what began to happen was his 'good' legs seemed to just become unusable to him, and he can't get up anymore. When I help him up, he cries, and gets agitated, so there is pain. He can't even get up on his front elbows much to eat grass. He wants to come outside, but he tries to get up and gets off balance immediately and falls down on his nose. It's so sad to watch. For the past few days I have been putting him in the clam sled and taking him outside.

So...it might be time to let go and let this beautiful soul be pain free. If his wound is as bad tomorrow as it was last week despite meds and treatment, it might be one more reason to help him fly off.

So please send light to Tripod, and me. It is so hard because despite his crippled condition, he has always had a good life here, and this is not how I wanted him to go out, in pain with sores and such. But we will do what is right tomorrow.