The Grumpiest Old Men being given a chance at Apifera 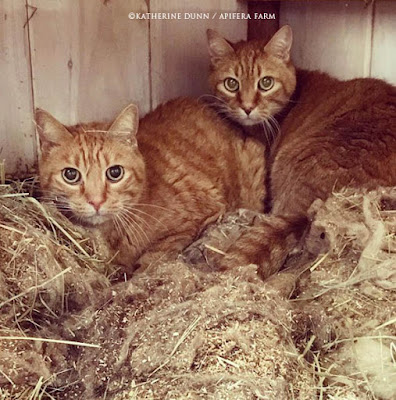 My contact at the local shelter where all our old cats have been adopted from contacted me a week ago.

For the record, I was minding my own business, working in the office when her email came in.

A woman had reared these two brothers from kittens, the mother was an outdoor ferel and she brought the two kittens in in time and they never left the house. She cared for them all these years but now had to go into assisted living. She cared enough to write a long note about them when relinquishing them to the shelter. My contact spent a lot of time with the two cats over the coming days, and basically, they are ferel. The only reason she asked me to take them in is they get along ok with cats. We all knew these two were not going to get adopted, they are 14.

So, they arrived this week and I can attest they are grumpy. They are also scared and I guess in the shelter went through the usual battery of shots and pokes and prods so were agitated from that. When we opened the crate door they went exactly where I knew they'd go, under the corner bench to the sheep fleece.

I worked with the ferel colony we had out west. Some never tendered up, Mama Kitty being one. I think some ferel or semi ferel can tender, others are wired not to. It is not my goal to tender them, it is my goal to let them live in peace here. At this stage, I am not attempting to get near them, I talk to them when I come in, but they are left alone. They have made it clear at this stage they do not trust me to get to near, one is much worse than the other. This was the same experience my contact had.

Noritsu immediately went over to check them out, no hissing and no claws. I told my contact if there is any sign of danger to the others, we will have to deal with it and she is with me on that no matter what. But they just want to be left alone right now. This was really the only option, they could not be put out for adoption. I am happy to try to give them a final home...as long as they know Papi is in charge, as am I.
Posted by Katherine Dunn/Apifera Farm at 9:47 AM

You are so good to give these old gingers a chance at a home, let's hope they play nice and don't fight with the other residents.