I named her Victoria, for obvious reasons 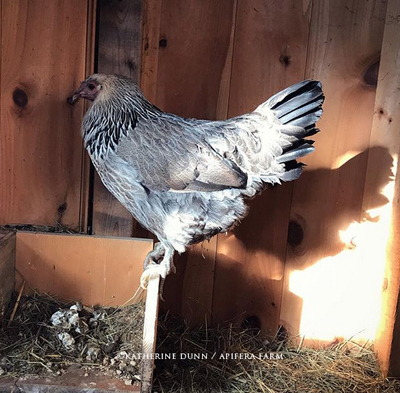 A few weeks ago, a nice gentleman wrote me ad asked if I might take on his elder chicken. He had written me months before, because he had been caring for his son's old chicken, and the chicken had lost use of her hind end and he thought I might have some ideas [which I didn't]. The paralyzed chicken died some weeks later and the gentleman had this elder, single hen. He thought of me again and wondered if I might take her, since he was done having chickens but thought she was lonely.

I agreed. I love chickens. I could be surrounded by them but of course there are limits. But I took her on and I just love her. I think she is a Wyandotte. She had no name. The gentleman told me he quit naming chickens years ago as they came and went. I understand.

I named her Victoria, because I like the royal sound of it, and the woman behind the name, and an old hen deserves some royalty in her final years.

I put Victoria in the special holding area in the front barn. This is my routine with new chickens, they can see through the chicken wire and get to know The Goose and Opie and Else, and Henneth the blind chicken and Hazel...but have a calm couple of days.

But, Victoria wanted to perch on a piece of plywood that was nailed to the framing, and there was a 3" space between that and the wall that she could have fallen into and gotten stuck. So, I held my breath and let her in with the gang. It went fine. I was most worried about The Goose, but he listens to me [a miracle that someone does!] and I spent time saying "No!" if he looked like he was going to peck her. The hens really didn't bother her. But Henneth is still in charge, despite her blindness.

The next morning I slowly opened the door and there were the three hens, perched together.

I hope she lays an egg, I guess she still does. He thought she might be about nine. Today is the first day I've left the barn door open for her so she can forage outside with Henneth and Hazel. I wanted her to have a good week here so she knew it was safe in the barn.

She's very calm and I can catch her easily too, and hold her.

Email ThisBlogThis!Share to TwitterShare to FacebookShare to Pinterest
Labels: Victoria the old chicken