Breaking News: Earnest the Pig Will Not Play Baby Jesus This Year in the Nativity Scene 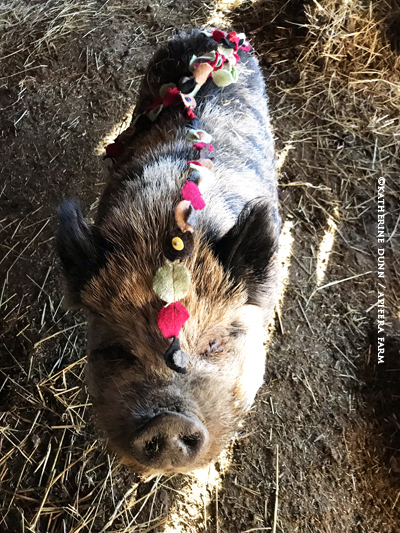 {I write a monthly column for our local paper. This was the latest episode from Tails & Tales of Apifera Farm}

I was making my way to the barn the other day when I heard a heated discussion going on. As I opened the barn door, I heard Opie the little goat say desperately,

“I want to be Baby Jesus again!”

It was then I knew the holiday season had officially begun. And like every year leading up to this one, the animals wanted to do a live nativity scene.

I’m not opposed to this idea, we certainly have all the right actors to pull it off. But we attempted doing one years ago back West and I swore to myself never again. Every year, I quietly hope they will forget about it and focus on Christmas stocking stuffers or putting their hoof prints on cards.

“Opie, you got to be Baby Jesus last year because you were a baby and were small,” said Jim Bob, one of the older goats.

“So let’s vote, all those in favor of Earnest the Pig being Baby Jesus, raise your foot,”
said Jim Bob.

“I don’t want to be Baby Jesus,” said Earnest. “I think I’m more suited for one of the Wise Men.”

Eyes rolled. Just then The Goose rushed in.

“I would like to be the Baby Jesus!” he said.

“The Baby Jesus doesn’t speak, Goose, it will be hard for you to keep quiet,” suggested one of the hens. “So who is the quietest of all of us?” she asked.

Everyone pondered, as they chewed cud.

“Henneth,” many said in unison. Henneth was the blind chicken.

I went about my chores, pretending I had not heard a thing, and days later I noticed they had a list on the barn wall. Where do they hide the chalk to write with, I wondered. More importantly, who teaches who to write cursive?

The list had Pino and Paco, the donkeys, as two of the Wise Men. And they had Lucia the donkey as a Wise Woman. Nice they are in touch with the times, I thought. Mother Matilda, the very old donkey, would be Mary, that made sense. They wanted Martyn to be Joseph. I was relieved I had no role, but then again, this was never going to happen.

Soon after, I put an Advent Calendar in the barn. We always had one growing up. One time when I was about six we got one that had chocolates behind every door. After day one or two, I grew curious what grand chocolate would be behind the door of the 24th, and I opened it. There was a chocolate Baby Jesus. I ate him, and closed the door.

Earnest wandered over to me, looked at the calendar and said, “Let’s open the door to the 24th.”

{In lieu of a nativity scene, the Apifera animals participate in a private Annual Garland Festival. The hand made garland was a gift from an Apifera supporter and each animal takes turns wearing it.}
Posted by Katherine Dunn/Apifera Farm at 11:37 AM