A quick but hearty THANK YOU 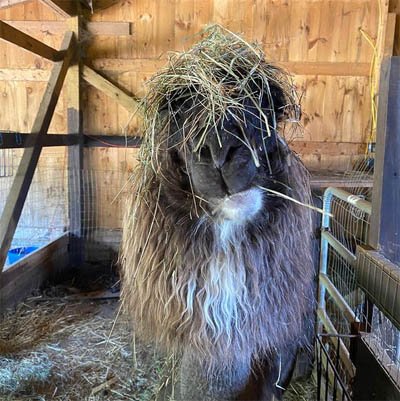 I am so grateful for everyone who helped in the hay fiasco. If you follow along on social media, you know that my hay guy could not come through with hay-or at least hay I felt comfortable putting in a hot loft.  He delivered 100 bales just to get me through [we buy 750] and the next day we discovered very hot bales, all heavy and wet. All the hay was damp, some more so. In a loft, this can cause a fire due to combusted hay. I so wish we had taken the temperature of the hot bales just so I could have told him how hot they were. I texted him and told him, not to complain, but because I thought he might want to know and because he had sent hay off from that field to others. He said he'd come pick up the hay, to keep what I wanted to get by. I kept 25 bales, sent him a check, and hoped for better weather.

But there was no way going forward I felt comfortable getting more hay in coming days or weeks from my local growers. It has been raining non stop and they just can't get their 3-4 days of dry, sunny, breezy weather. It's certainly not their fault. But I did what we were comfortable with-not bringing in wet hay into a hot loft. Certainly not 13 tons of it. Only takes one bale.

Here is a very brief but thorough article on hot hay, and temperature warnings.

I talked to another local grower who offered to do second cut, or even first cut when it dries out. But I decided , and I called him to discuss it, that any first cut in late August is stem on top and then second cut is growing into bottom. Nothing wrong with that, but I don't want to feed the richer second cut to Cushing equines, or laminitus ponies. Plus, I don't see how any hay will be dry enough at this stage since it is going in a hot loft.

Why risk it? I have a non profit to answer to, and I have animals to keep safe.

So the money we raised is to defray the cost of the higher priced bales I am getting from Canada. I actually think I might like them-they are compressed, and very consistent, and their protein level has been tested and is very high. I know of several people who buy them and used to buy local hay but could not keep weight on animals due to low protein. They are also very consistent in weight since they sell by the ton, just like we did out west. Here they price by the bale but you never know how much weight you are getting-drove me nuts when we got here, but we adapted. They also take up about 50% of the space.

It won't be easy getting them here. They come on a semi from Canada, and will go to my feed store. We can't get a semi into the barn area with the tight turn. Each pallet is wrapped, and weighs 2000 pounds with 48/40# bales. So we will have to use Martyn's boss's trucks to pick up three tons at a time, then hand carry the bales into the barn. So that is 4 trips. My feed guy is being very helpful allowing us to make trips over a couple weeks while he stores it.

Anyway, thank you to so many who jumped in to help, immediately. Not having hay in the barn for the year this late in season is like not having oil in the furnace. It was a very upsetting hay year. But as the rains poured down again this week, and the humidity is still here through the week, I don't have to worry about having wet hay delivered again, or turning it away.

Posted by Katherine Dunn/Apifera Farm at 8:44 AM