New work, lots of rain and the boy ducks are criminals 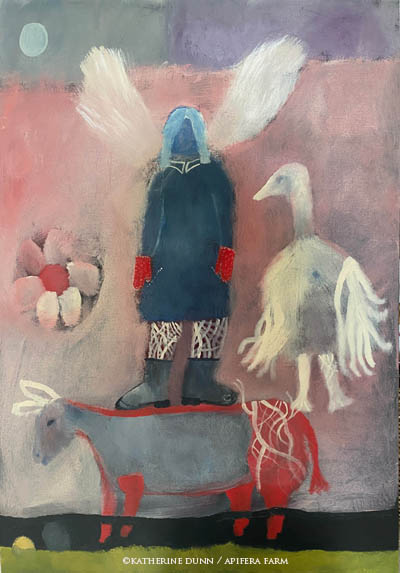 This canvas is called "A Hole In Her Boot". It's been busy but I've managed to get three new large pieces done for Sundance and will ship them off soon. After that I want to spend some time in the Elder Cat Suite with my hand stitching  raggedy messes, and the cats of course.

I'ts August, which means I get to start thinking about autumn my favorite time of year followed by winter, and spring. We are still waiting for hay. The poor hay people can not get on the fields, or it is sunny for 2 days and then pours. My hay guy got me a bunch of bales to get me through and we hope the dry weather forcast for this coming week [after another down pour this morning] will get us our hay. Everyone is waiting on it and Hay Guy is doing his best, I feel for him. As he said, 'You can't make hay on water." No, you can't.

I was finally able to get our field mowed and it was still pretty wet but is marshy.

My main farm activity of the last few days has been trying to contain the the two [insert mild expletive] male ducks. They are reaking havok on the poor Goose, and my lady Pekins. They are even going after the little baby goats. I don't like it one bit. They are constantly squeezing out of paddocks, then they run The Goose ragged and he does not fight back. He never did, it was why his former home asked me to take him, he was always getting beat up. He even has lost some feathers on his head. I'm really fed up. So today I worked, again, plugging holes and then I watched the two criminals running about but my fences at least kept them away from The Goose, for now. I have a couple places I hope to build a permaanant place for them, and they will no longer get to free range. I am tired of testosterone!

Speaking of testosterone, of the chicks/ hens I got this spring, it is clear now one is a roo. Dang! I will hope for the best. The other wry neck chick, Golda, is doing well but the other two shun her, and so do the older hens in the special needs group. Golda likes to sit near the goat fence so I might put her in there when she is bigger. She is holding her neck well and gets less wonky now if she gets nervous. She still responds to me when I say, "Calm", by calming. SO I feel good about that, that we got her back on her little chicken feet. And now I have experienced wry neck so another feather in my arsenal.