A saxaphonist meets the donkeys, and I officially have entered the shortest season of my life 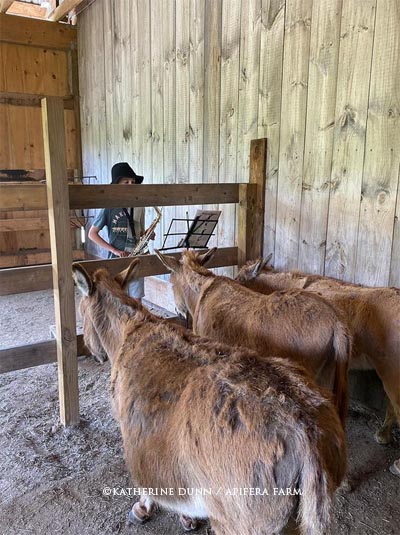 Yesterday we had a wonderful visit with a young man named Vincent who came to play the sax for the donkeys and equines. If you follow along you might remember a young man playing for tips on the street in my village and he was to donate the money to a charity. He had just heard about our mission and sent me two $20 bills. I was touched and honored. His little sister is a brave young horse hearted child who has fallen in love with Biggs, she came too and climbed gates like a monkey. She likes to call him Big.

So it was really fun and if you know donkeys you know they are very curious little creatures. I never have to bribe them into a scene with people, they just stumble on up out of curiosity. I really thought they might bray along, as some music makes them do that.

Boone was the show off. He had a ball. And I will give Vincent credit for being a pro and focusing on his music while Boone proceeded to lick him and investigate his hat. I think that could be his first album cover, don't you?

After they left, I wondered if they would remember me twenty years from now, as I remember some of the horse people I knew as a child. I expect to see this young family over the years, they are new to the area and very nice and it is fun for me to have well behaved, interested youth around as a good mix to my elder work. In my head I counted the years for the five year old to be old enough to drive, and I thought of how old I would be. I also thought of an older women who was about 70 when I met her when we first got to Maine-a horse person-and she is now close to 80. She too had a young family nearby that she nurtured as she could and they all grew up, and she grew old. And now I am her. I have taken my place on the great wheel of life.

A thought has meandered through my brain daily and it is not a scary thought, it just seems to keep showing up. I think it started because I've been seeing a lot of people in their early seventies dying. I read the obituaries, always have, even as a child, I don't know why. But now that I'm sixty four, it dawned on me that if I too died at 74 that is only ten years left. Sobering. I have never been one to have a goal of living to a very old age, I prefer not to. I always thought 78-83 seemed a good time to go. My mother lived alone after my father died [he was 83] until she was 87 and died suddenly but was active until then.

I've been asking myself, if I did only have ten years left, what do I do with it? How many more paintings will I do, or want to do? How many more books is that? How many more animals can I adopt? Is this my last great house adventure? For the latter, I always thought if Martyn died before me–a horrendous thought–I'd move to the sea and get pugs. I probably won't be able to, but maybe there are great adventures left if I only have ten years. We don't know when or how we go [usually], but as you enter a certain decade you see what's coming up and it seems much shorter than what is in the rear view mirror.

I don't have a death wish. It is just a simple thought that keeps running around my head. In a way, it is a good thing because it makes me say everyday, what will I do today of worth? 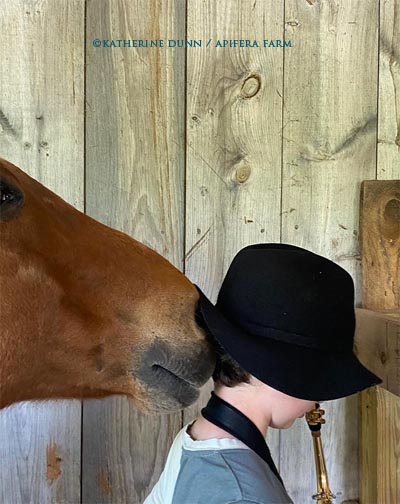 Posted by Katherine Dunn/Apifera Farm at 11:53 AM

Katherine, I am 73 and do know how I got here. I think these same thoughts every day. My friend Debbie asked me if I thought about death daily, Absolutely. And mostly about forgiving and letting go.

That is such an interesting and important thought-that you think of death daily but it is more on a spiritual level of letting go and acceptance. I think when we are younger we think of death as far off and impossible almost...scary....dark....end...but as we age we have [if we are graced] had fuller lives, lots of loss etc...and death takes on an almost 'project' like essence-to forgive, to thank, to appreciate each day etc...I almost see death as big breath out.