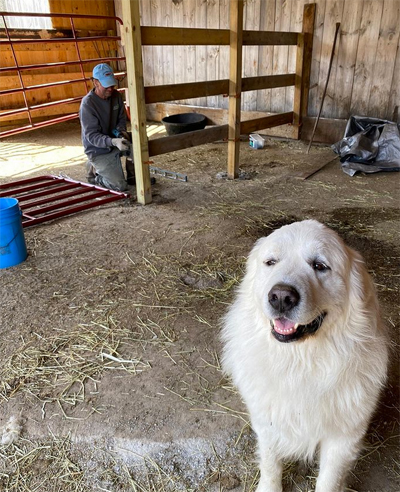 We have a lot of one or two day building projects in the barns-one to add a divider wall and gate in current Boone barn. We had used two cattle panels and it worked, until Biggs and Boone decided to Rambo them in gelding over play. They bent them up. Those things are expensive but they refuse to get a paper route. I have to get them No Chewed now before they eat them to the ground. Rascals.

Next up is putting the same divider wall and gate in the Llama Love Room where Luci and the sheep live. Then I'll have two nice roomy stall areas for winter and other needs.

We got the veggie garden tilled but I'm behind! I usually plant by 5/10 or so but it got away from me this year. We've had chilly nights so it isn't a big deal. I do hope my sunflowers do better this year and that I've controlled the rats better. They literally ate almost all my sunflower seeds. Mama Bear was ticked, and sad. I bought my sunflower seeds early as a lot of people are planting them in support of Ukraine which is great. I'll mainly do lettuces and beets and tomatoes. I stay away from squash here since the upkeep of keeping squash bugs off is intense. Of course we'll do herbs and pumpkins and maybe more beans since they are so fun to grow. Martyn has bravely admitted he planted way too many beans last year, mine had all been eaten by rats [last year was bad and I did not eradicate them like I usually do].

We also invested in $1000 of more split rail for the back equine areas. Those split rails were here when we bought the place and have weathered about twenty Maine winters so we are adding and fixing about 20 rails. We also have pasture fence up on it, but it looks nice so we opted to keep it.

I got the front goat stall's deep bedding cleared out, took me three days. Teddy helped because he can smell the rats under the barn and in their tunnels. He actually did me a favor to loosen up the bottom layer of buildup.

We still have to get the large dead tree off the coop, and fix the broken areas of the coop.

May is just that way. So much to do. But then at some point it gets a bit, a tish, less manic....until something breaks again or Pickles and Puddles decide to build a go cart.

I'm hoping to start getting elders out here! We were able to snag a porta-potty, not an easy task. I think this summer is going to be heavy tourist traffic. People are pent up. To be honest, every time I think of setting a date for an art sale in my Lovey Hut, I get queezy. I'm still a bit concerned about the virus.

Posted by Katherine Dunn/Apifera Farm at 10:09 AM

Email ThisBlogThis!Share to TwitterShare to FacebookShare to Pinterest
Labels: Teddy

That's quite a list! Very impressive Katherine and Martyn!