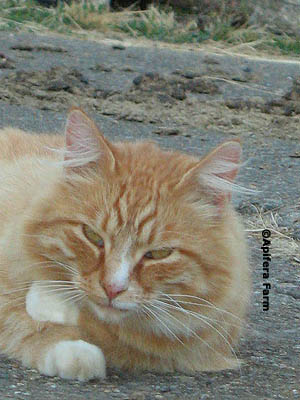 When we first moved to the farm, we knew there were a number of cat spies that would stealth around at night, seeking warmth and food at the inn. One was the calico that later we named Mama Kitty, who I was unable to trap for two years, so great was her survival mechanism. Within those two years she had three litters, one of which totally disappeared. But the first litter consisted of Sweet Pea, Hazel, Mr. Plum and Mr. Quince, and Angustifolia aka 'Gus'. 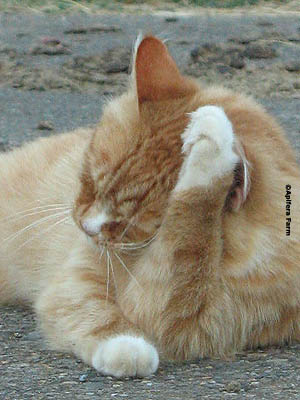 My introduction to Gus was charming. I was in the sheep barn and out of nowhere, a tiny orange fuzzball popped out of the hay bales. He looked like something out of a cartoon, and was no more than a week or two old I assumed. Gus was always the chunky one, very brave, very independent, but always willing to be around. He has since grown into a civil little mouser, eating the entire body, which is helpful to the barn master. 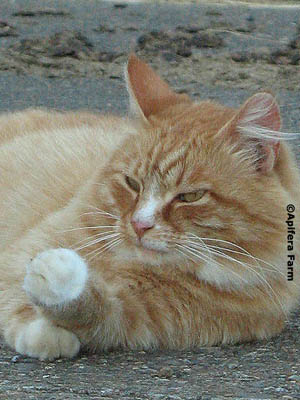 Gus is not the cuddly type, but he does allow me to pet him. He has the kind of cheeks you want to squeeze and say things only humans conjure up, "Smooshy wooo-wooo moopsey". Gus prefers polite, but to the point and move on conversations, such as "Mornin', Gus." What else needs to be said?
Posted by Katherine Dunn/Apifera Farm at 10:15 AM

As a woman besotted with one, I know that orange male kittehs are the best. Those ear tufts, oh baby.

I suppose it's absurd to hope that he allows belly rubs?

I've always been a sucker for orange cats too. My first cat was Gracie, she was my tabby I got at the NYC animal shelter back in the '80's when I lived there. I brought her home in a box on the bus. She was with me 18 years...Gus is not into rubs, I guess it implies too much of a submissive stance which is deadly for a demi ferel. It is funny how each cat has such a unique way of adapting in our barn, some are more tame than others. Just like martyn's family, I guess - ok that was a joke.

Just wish you could have had more time to get to know the cats. Oddly, Big Tony went into the guest bed for three days and slept on your pillow area. Funny.

My pansy-ass boy adores belly rubs and is not shy about demanding them.

Big T liked me! I felt so honored. He was cuddling with me on the porch Sunday morning.

BW was starting to come around too, I swear.

Your animals just touch my heart so much!! We can't have any pets here where we live (we're renting an apartment) and we just miss having a cat so much! Visiting your blog every day, Katherine always makes me feel like I am closer to animals!! Thank you so much for sharing your wonderful animals with everyone! You have a kind heart!
Debbie

I love the dailiness of your blog and your ability to open your home/farm/mission up to all of us. Your paintings are absolutely gorgeous and inspired! Thanks for putting yourself out there being an inspiration to us newbies!

Love the photo of you and the chicken...and the poem too.