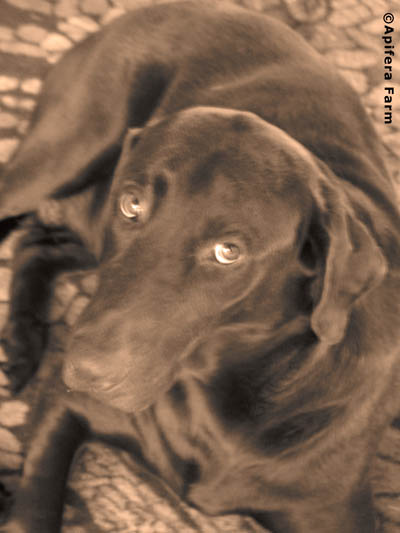 This is the face of the chocolate lab named after pie. He is communicating very clearly to me: "I guess you're disappointed in me...I'm so sad."

As we were just finishing up our evening wine last nite, about to head inside for dinner, a thundering of feet over flying pea gravel headed my way. It was Huck, foaming at the mouth and soaked in the effervescence of his main conquest in life, Mlle. Le Pew. He looked at me in a panicked state, saying, "Some thing's wrong, something doesn't feel right, help me!" We have tried explaining to Huck that Mlle. Le Pew really has no romantic interest in him, nor does she even want to be "just friends". But Huck's heart is so big, he wants everyone to come into his world and experience, reciprocate and expand with is love.

And so, at about 10 pm, after 2 glasses of wine, in the dark, I proceeded to give the 95.5 pound skunk lover a vinegar bath. As bats flew over our heads - the bewitching hour- Billy retreated to the house, and Martyn gathered towels and ivory liquid. Poor Huck had it bad this time, in the eyes and a direct intake in his mouth. He had to spend the nite in the 'for the skunked" area of the house.

I will not lecture him today about Mlle. Le Pew. Like all big hearted fellows, he must learn in his own terms. I do know he was very glad to see me this morning, after his 'skunk-out" was over. He came in the kitchen, not bounding in like usual, but in a rather embarrassed way, and with his big brown eyes asked me, "Are you still upset with me?...". I bravely gave him a morning kiss, even though the perfume of the nightly escapade was still lingering. I just think that if one gets skunked, one deserves a kiss. I've smelled worse, but I won't go into details.
Posted by Katherine Dunn/Apifera Farm at 9:44 AM

The expression in this photo is just perfect - poor fella!

Oh poor Huckleberry Hound! I hope he's learned a lesson, but I suspect Mlle. Le Pew's charms are too beguiling...

Katherine,
I love your blog and your wonderful stories. I'm quite a fan of your art (I'm with Morgan Gaynin also). How I wish I could produce such treasures in a short amount of time. Your life on your farm sounds so delicious and enviable. I will visit your site often.I'm so glad I saw the link on MorganGaynin's news If I ever get savy enough to create my own I will someday. I love your dog. We have a retriever lab mix, Abby, who is forever getting herself in fixes. One day I would love to chat. I think we have much in common. Joyce Patti

Hi skunk lovers- thanks for writing. There's still a hint of skunk in ares, and also, all I can smell is vinegar! Joyce, hello! We will have to chat, I would love too. It's good to know someone else in the group...I have to go visit your site...and then we can chat soon.

Oh Katherine i do not envy you...I hope my days of bathing skunky dogs are over. Altho with my pup Zinnia, i am sure i would have my hands full if she had the chance to go after a skunk!

Living in the wilds of NH as I do, my lovies have had more than their fair share of unfortunate le pew encounters. Got this off a doggie bb ages ago and nothing I've tried before or since has ever come even close to being as, quick, cheap and effective. In a plastic tub using plastic stirrers conjur up a pasty mix of Hydrogen Peroxide plus Baking Soda- apply liberally to (usually one but sometimes more) contrite dog(s), step back and behold the wonderment of KITCHEN SCIENCE as the stink bubbles away - followed up with a bath of DAWN dishwashing liquid. Some words of caution - wear gloves, do the douse in a very well ventilated area, keep out and away from eyes, nose, mouth, etc. - the chemical reaction of the Baking Soda and Hydrogen Peroxide makes it combustible so it's a make and use as you go type deal - no way to safely premix and store. GOOD LUCK

Interesting recipe- I think it is the same or similar to one I had my vet scrawl on a piece of paper which used to hang on the fridge. But since i can never find it I wing it with vinigar.My only fear is Huck seems to have sensitive skin and I wonder if this would sting - although it's probably no worse than skunk. Still, you are a good advertisement to try it!

Worse? Tell me it wasn't Martyn!

Paul Krebaum seems to have first published the peroxide/soda de-skunk recipe around 1995.

I once bought cases of vinegar and tomato sauce and fruitlessly labored over a cold, wet night. Luckily, I found the peroxide-soda-soap recipe. It works in mere minutes!

The Skunk Remedy Recipe
In a plastic bucket, mix well the following ingredients:

...for very large pets one quart of tepid tap water may be added. Wash pet, work deep into the fur. Let your nose guide you, leave the solution on about 5 minutes or until the odor is gone. Some heavily oiled areas may require a "rinse and repeat" washing. Do not keep in a bottle.

That's it! Instant. Virtually no remaining odor. I was amazed and very, very grateful.