Ward on the mend 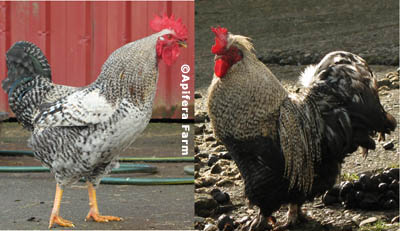 For those of you who keep up with the Animal Update side bar, you know that Ward Schumacher the rooster was wounded last week. While I did not see the attack take place, it was without a doubt Papa Roo [on the right ] defending his harem from the much larger and movie star like Ward. I know this just because I know this. I know Ward's favorite haunts, and when I found him sulken under my car, I knew something was a miss. Just as I was coaxing him out, I heard a loud sqauking from the hen house - Vivienne, Inkie and Henny Jenny were all shouting out at the same time - explaining the whole situation to me like three sisters competing for a mother's attention. "Ward jumped on me..." Vivienne started..."And then Papa saw..and, and" Inkie stuttered. "Papa came running at Ward!" Henny Jenny said, getting tot he point...I looked at Ward, "I just wanted to be with my girl, Vivienne...I meant no harm. I didn't mean to overstep my line on the pecking order..." Ward said, with his red comb limp, and bleeding.

When Ward's comb is limp, I know there's something wrong. It's a shock to see how easily they bleed, those combs. So just because there is a lot of blood on a rooster comb isn't something to get alarmed about. But when I finally got him out from under the car, I could tell he was quite agitated, and he ran from the hen house area. But his run was more of a hop, fall, limp...and he finally made it to the barn. I examined his head for more wounds, but it was mainly peck damage on his comb. As I started going over his body I could smell a foul odor and upon examining his upper leg area found gaping hole filled with tiny maggots. The wound was down to the interior muscle...It was definately a "eeewwww-icky poo" farm moment. 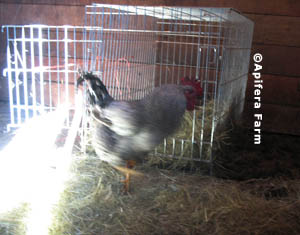 So I treated it the way I treat all open wounds...iodine. Instant killing of the maggots. I had found the injured Ward at the end of the day, and was shocked at how quickly the maggots had set in. The wound must have happened in the morning, and with the 90 degree temperatures, the little creatures were just waiting for a job. The maggots at that point were actually helping eat the infection. I put Ward in a stall in the barn, with a crate of hay, water and feed. He didn't move much the next day, his comb remained limp. I'm sure he had a fever, as he didn't eat. I treated the wound for three days with morning iodine and water flushings, not a comfortable procedure I'm sure. By day 4, I felt Ward was ready to return to foraging outside.

The morning I let Ward out, a magical, spooky thing occurred. My system in the morning is to only open the front door of the hen house, so the hens can go out to their contained area, but can't get out to the barnyard or barn areas. This allows the cats to eat their food before the chickens arrive. As I was opening Ward's stall door, a hen cam rushing up - it was Vivienne, Ward's muse. She must have 'flown the coop'. She came rushing to that stall door as Ward came out. "Ward, darling, are you all right? Come, let's go out and seek tiny flying things to eat..." and off they walked.

That night as I did barn feedings, the hens were already in their coop for nightly dreaming time. And Ward? He had returned to the safety of his hospital stall. It seems the safety of a good night's sleep is worth being parted from his Vivienne for the night.
Posted by Katherine Dunn/Apifera Farm at 11:27 AM

Phew! I don't blame Ward for going back to his hospital stall to sleep! He will never forget that flogging! I know I never will either! When I was around 8 or 9 years old mom would have me go our long driveway and get the mail. Every time I would come back I would creep real slow looking for the old mean rooster. He loved terrorizing me! Finally one day he jumped on my back and mom came out with the broom to swipe that mean thing off of me! She used iodine that day too, to my little back full of flogging rooster marks! I still wonder why he chose me to intimidate, or did he think I was a good looking hen?!!! LOL anyway, dad took care of him but he was too tough even to eat! That's one thing I hated about living on the farm, killing the animals and then eating them! UG! Get Well Ward!!!I know how YOU feel! tee hee

It is weird how fast maggots grow! When I worked at Tiger Haven (in Tennessee) we had a huge room for food prep we called the meat room, full of meat of course. Anyway, it was impossible to keep the flies out, so we had a lot of maggots growing on the tubs we kept the meat in. It was soooo gross!!!

I'm glad to hear that Ward is doing well, though!