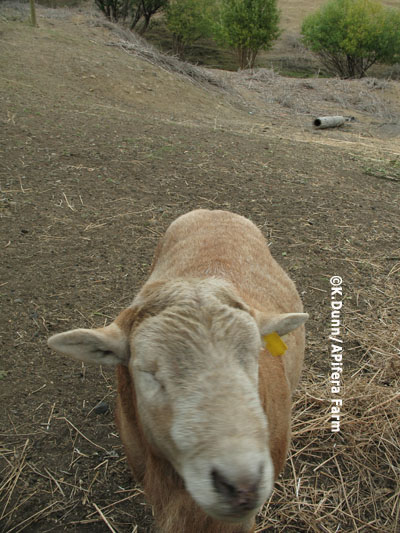 In which Chickweed finally gets the girl, but the barnyard is in chaos....


After three years of building giant amounts of testosterone, Chickweed now has relief...I think. When we had our first lamb crop in '05, we had 90% rams. I saved most of them, thinking I could sell them as breeding stock. This of course was my way of not killing them, and I learned a valuable lesson on proper culling. One does not need three rams -that's 3 pairs of testicles the size of eggplants [no exaggeration for you non sheep people. ] We do keep two unrelated rams, as I choose to breed them in on-off years to keep the line fresh. Many breeders keep one ram, and sell him after two years and get a ram that is not related. Otherwise, "you'll end up with five headed sheep without teeth"as one breeder told me. 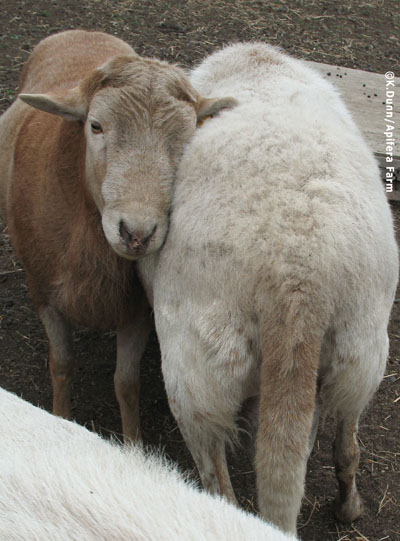 So, after selling more than 5 rams, Chickweed was and is left behind. I never understood why - he is charming fellow, and mellow which is nice for the shepherd. He wasn't any smaller than some of the other rams. So, I decided to prove him this season, ie show the ladies what he's got. While this is good news for Chickweed, it meant I had to provide three separate areas for three separate rams to hang with their girls. And provide another area where the young yearlings run who are not ready for breeding.

In other words, chaos in the barnyard. I hate breaking up the ewe flock. It creates 2 or 3 days of constant sheep bleating. And they have to live with their prospective rammers 24/7 for 30 days. On top of it, I put Rosie and Daisy in with Joe Pye, who shares his quarters with the Boer goats, Stella and Iris. Stella is the herd boss, so she spent a good day defending the hay area. Meanwhile the rams run around curling their lips in sexual anticipation and peeing all over - another sexual turn on for sheep. It's right out of a Barry White song.

The first year we bred Joe Pye Weed, we never saw him 'do it' with the ladies. In 30 days, not one mounting. But we had twins out of everyone. Mr. T on the other hand gets right to business. Now Chickweed, I am a bit worried about him. He is so mellow, and I only have one yearling ewe in with him just to see how he does. I thought he'd rush in there and go right to business, but he barely introduced himself. He was polite, not pushy like the other rams. Perhaps he prefers the comfort of the stall at night, when it's just him and Blue, alone together as virgins, under a tin roof with rain 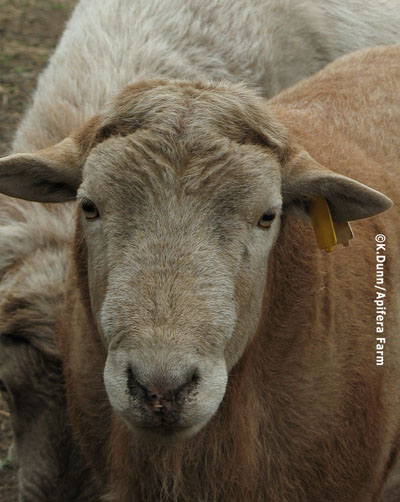 falling. I knew of a ram that had 40 ewes to service and they didn't get one lamb! I joked with them that '"That's what you get when you name a ram 'Lancelot'", he has a confused sexual identity. We name our rams after weeds, and I thought Chickweed, plentiful here, had a funny connotation, but perhaps it tainted his manliness.

I'll be glad when November 3rd is here, and all the girls are back together and rams are all back together. One slight adjustment in the barnyard creates such chaos. I did have a moment where I thought, "I can't wait to see what we get in the spring." Lambing season is always different every year, but the anticipation is palpable every spring, much like the return of the Western Tanagers, or the tulips.
Posted by Katherine Dunn/Apifera Farm at 11:23 AM

May much come from all your chaos. When the girls are back together, they will have much to gossip about together.
I'm glad you had artist visitors. Good times.
Fall is such an invigorating time. The creativity just flows, and carries one through the dark days bringing brightness and cheer.
I'm glad you are enjoying your time in your studio. "Thank you Martyn!"
Blessings, Debbie

We're headed there next week. Although last week, cleaning the feedlot, trimming toenails, worming and sorting caused plenty of chaos. And they got us back by figuring out how to lift the door in the gate and remix themselves. I don't think I would have noticed (we thought they jumped) but for HotRod, the llama wandering back and forth through the open doorway as if to say "Look here, dumb shepherd...."

I laughed so hard I had tears running down my face! My nearest neighbors are a herd of meat goats so I can just imaginen your sheep as they go into rut.

May you be blessed with dozens of fine healthy twins and twice that many eager buyers!