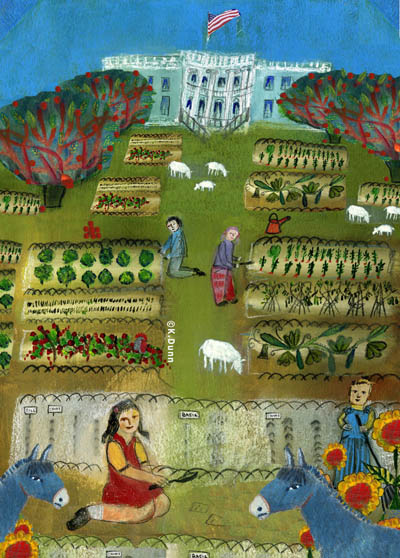 Michael Pollan has written an excellent article in the New York Times, an "open letter tot he next President", and I hope everyone who reads this blog will take time to read it, and pass it on. I also know that this farm will be writing a letter to the next president stating our concern and interest in the food policies of our nation and how they effect the world, the economy, the farmers and the environment, as well as health and obesity issues.

And why not a Victory Garden on the South Lawn? Wouldn't that be fabulous. Imagine, all those pesticides to keep that lawn as perfect as they keep it, and all that water. And for what? Good looks. I hate the concept of a green lawn. I always have. My first little bungalow I owned in '96, I grew vegetables in the front yard. It was not well received. The little 5 year old came over one day and said, "Daddy says you like weeds and beans and he likes grass." Oh, how true. When parents say, "but the kids need grass to play on..." Oh, I must contain myself. Sorry, bring a kid to me and I'll toss him out in a field, or in the woods, or in the hay bale, and they'll be in heaven. It's parent that need grass, so they can delude themselves that their children are 'cleaner and safer" from, heaven forbid, mud, dirt, weeds, thistles and stones.

Anyway, the concept of a victory garden at the White House is not a new concept. As Pollan points out, Mrs. Roosevelt did this in 1943 [and the USDA was afraid it would the American food industry]. But imagine what a role model the new President and his family would be, if they got up each day and puttered in the garden. School children from nearby areas could come and help take care of the garden and learn from their own President how valuable growing our food responsibly is. They would get much needed exercise. Blackberries and ipods would be left at the garden gates. Children and their families could learn about nutrition, and the sheer pleasure and accomplishment of growing, and sharing, food. Picnics between families of all races and classes could be held.

And as Pollan went on: "You should make a point of the fact that every night you’re in town, you join your family for dinner in the Executive Residence — at a table. (Surely you remember the Reagans’ TV trays.) And you should also let it be known that the White House observes one meatless day a week — a step that, if all Americans followed suit, would be the equivalent, in carbon saved, of taking 20 million mid size sedans off the road for a year. Let the White House chef post daily menus on the Web, listing the farmers who supplied the food, as well as recipes."

And sheep.Sheep would demonstrate that the small amount of grass left on the lawn can be naturally mowed, and fertilized. No noisy men in red suits with leaf blowers or mowers. Of course they need a rooster, for ambiance, and ok, I put some donkeys in there too. I am hoping the next family to reside in the White House will be the Obamas, and I think those two little girls need more than a dog, they need donkeys.
Posted by Katherine Dunn/Apifera Farm at 1:31 PM

I can just see the sheep grazing , a donkey or two and a rooster crowing once in a while. This would take the stuffing out of D.C.
..., and I love the idea of a garden that people could take care of; a distribution of the right kind of wealth and your painting is a lovely depiction of this.

I really hope people take time to read the article. It's so full of historical perspective on how our food system got so messed up. He would be such a good team memeber for a new administration.

I love Michael Pollan - in fact I was just telling my sister about him a moment before I opened up your blog.

I am bummed out because my car has to be repaired (the hatchback was damaged by someone backing into it so the fix is a whole new hatchback). I will lose my "Farm animals working for Peace" bumper sticker. Darn...

Sorry to hear about Ward - I lost a favorite rooster several years ago and the air seemed so emply for weeks.

I read Michael Pollan's article also. I'm all for a National Garden in place of the south lawn. I'm slowly getting rid of our lawn. Little bits at a time. Mainly I grow medicinal and culinary herbs at the moment. We all need to evaluate our food values and make changes.
Debbie

Yea, Debbie! I know not everyone can grow all veggies, but people can become aware of draught tolerant plants [many of them medicinal!] and other ways to have a yard instead of all lush grass. Little bits at a time lets you learn what works too.

Tina! Sos some junk yard hunter will find your hatchback with the peace bumper sticker on it. It might just live on...sorry though.

nice post, K! i'm all for it. i'd take time every year to volunteer in the national garden, too! we spent the weekend shoppin for a 4-season geodesic growing dome and cross-our-fingers, think we found a used one that we can grow food in year round! so where's the tax-credit for growing your own food?? i bet many more would then! it's our health insurance. a friend is working on a program in Kansas City to teach and guide families to grow food in replacement or mixed into their front yards. i mean, how easy to grow seasonal lettuces or hardy greens? yummy, healthy and so gratifying, too! btw, your painting made me smile so big. what a site that'd be.

Hey Jenny Colored Sock Mama,
A tax credit would be a great idea! I mean we get a property tax break here, and could never afford this farm without it. There are so many ways and ideas to get this old earth and economy and food system better. So cool about the 4season thing. MArtyn and I are going to try simple glass panels from the windows we took out in the house. I'm not sure it will work this winter, but next.

One of my art and blog followers {Thanks, Seal!] emailed today and talked about Alice Waters. You 'younger' folks might not know of all her work she has done with scholl children/school systems in California to get better food in kids. And EDUCATE them, since most of the parents don't know what a vegetable is either. This idea that eating healthy takes too long is bogus and ignorant. Alice set up systems and programs in the public school systems - back in the late '70's/80's that had kids growing food that would then be used in the school lunches. It taught them the joy of growing, the responsibility of growing food and feeding oneself, pride, and HOW GOOD IT TASTES. Seal reminded me that Alice Waters worked with the Clintons to try to get food systems going - I'm not as up on the facts of that as I should be to write about it, but I have followed Waters and she is fun to read and listen to - and if you're really young, yes, she is the Alice in Alice's Restaurant.

I just added the link to Alice Waters site and you can read about her foundation and work within the Slow Food movement, as well as her work with school systems. Here is a partial qoute from her site:
In order for there to be a future to the environmental movement, we must teach the children that taking care of the land and learning to feed yourself is just as important as reading, writing, and arithmetic. For the most part, our families and institutions are not doing this. Therefore, I believe that it's up to the public education system to teach our kids these important values. There should be gardens in every school, and school lunch programs that serve the things the children grow themselves, supplemented by local, organically grown products. This Delicious Revolution could transform education and agriculture."
www.chezpanisse.com/pgdrevolution.html

Wonderful idea! In my dream team Obama administration, Michael Pollan is Secretary of Agriculture. Many of us in California are working hard to pass Proposition 2, the Humane Treatment of Farm Animals Act, which is supported by Michael Pollan, Alice Waters, the Humane Society and so many others. This law will be good for animals, for family farmers, and for people. Please help if you can!

Thanks, Tai! Yes, I know this proposition and we at Apifera Farm urge Californians to vote YES. I did have to go to their website becasue I wasn't sure if other states and as yet ammendments on the ballot or not. But this quick blurb helps - "Prop 2 will reduce the suffering of nearly 20 million animals confined on California factory farms. The measure will also prevent other out-of-state factory farm operators from setting up shop in our state with veal crates, battery cages, and gestation crates—reducing the risk that these noxious factory farms will pollute our air and water, drive family farmers out of business, and harm rural communities.

I like your national garden painting very much. It reminds a lot of Howard Finster's style of folk art, and I was wondering if you've ever drawn any inspiration from Finster? I really like your blog, by the way, and totally agree with the messaging.

New comments are not allowed.