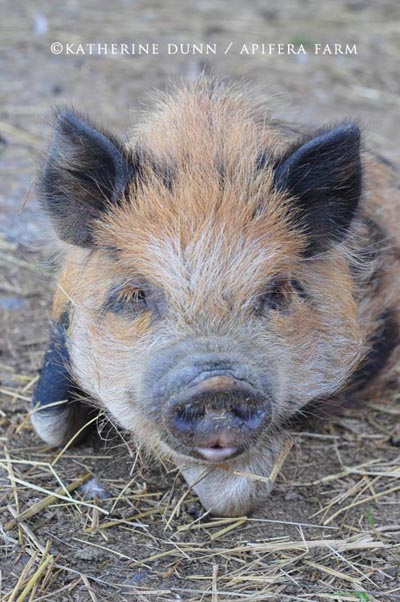 Ernest arrived a week ago after a long 7 hour trip from Eastern Oregon. A kind woman was coming to Portland and offered to meet me at the REI store for the delivery. I don't imagine there are too many pig swaps in front of REI, but little Ernest was sound asleep when we put him in my car.

Ernest is a rare heritage breed called the Kunekune. He will be a worker for us, breeding with Pearl and Doris next year. Fear not, Ernest will reside here with his harem of two into their twilight years. Kunes are a smaller pig and Ernest should top out around 250# which makes them much more manageable than some breeds. They are very mild mannered and docile, and so far, Ernest has proven that. What a genuine sweet fellow he is, greeting me at the gate, following me like a pup.

Ernest currently sleeps with Goose and Moose. He's only 3 months old and still small, so he's safer in there at night. He sits like a dog for his breakfast - a definate pig trait - and seems to like wheelbarrow rides. He has met Doris and Pearl, who are much bigger than he, but he won't see any love makin' until next year.

And yes, Rosie has met Ernest. Rosie reacted to him like she does all new arrivals,

"Hrumpf, passing on your left, if you don't mind."

I told Ernest not to pay her any mind, she had a good heart, except around food. Eventually I will need to separate him out so we don't have any accidental mini Rosies. I told Rosie that perhaps she could learn some normal pig things from Ernest - like manners, pleasantries and standing still for kisses - but she "Hrumpfed" me and that was the end of the discussion. 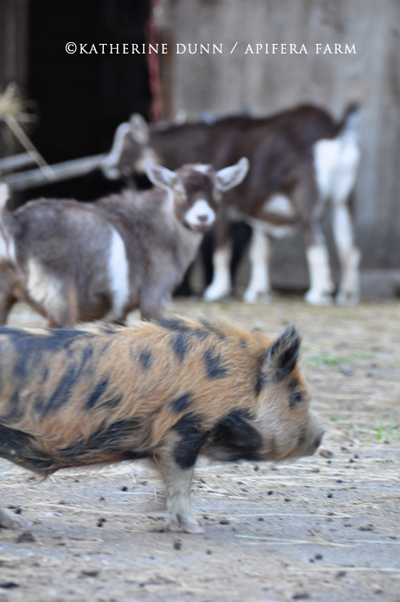