A miracle call from the crippled goat 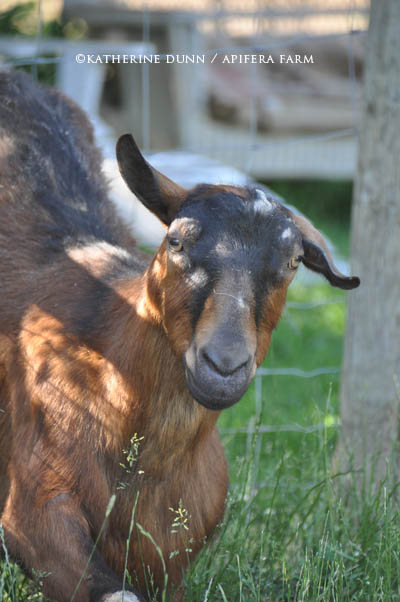 In which a goat speaks to his caretaker...for the first time.

I have moved Stevie into the Disabled Vets Orchard, for lack of a better term. These are the Misfits that I moved out of the regular barnyard so they wouldn't be accidentally tortured by Marcella-the ones that are wobbly and unable to run, or in Rudy's case, just plain crippled from arthritis.

So, it was time to move Stevie. I've been watching him like a hawk, spending lots of time sitting and watching him move, to try and decipher exactly which part of his body is weakening on him and causing him to cast.

After finding him cast twice yesterday, I decided the softer ground of the orchard, and grass versus bedding, would be less slippery for his one stable foot. I also discovered sore on the other front leading foot-the foot that gets all the pressure of the weight, and it almost appears as if his hoof is breaking off.

Stevie doesn't leave his barn much anymore, which is a shame since he liked to in the past, and when I first started leading him to the orchard, about 50 feet away, I really was disheartened. I wondered if keeping him going was the right thing to do. But midway there, he recognized where he was headed and really picked up the pace. Once there, he got to nibble on grass and seemed really pleased with himself. Now that he's in the orchard, I can look out the studio and see if he is okay, and when Martyn is coming and going he too can see him. He is with Old Rudy, Scooby, Aldo and Professor and the pigs come and go, and chickens, and hens. And no bouncing white dog to possibly cause a fall.

And then, this morning, a miracle occurred.

He called to me as I entered the orchard. Stevie has never once spoken verbally. Some goats talk all the time, they all have distinct voices. But Stevie never talked. I had one other got that never talked wither so it isn't unusual. But there he was, talking to me, quietly, which is fitting for this stoic soldier.

I really knew I'd done the right thing moving him into the orchard. He ate well and seemed more confidant, like the Stevie I knew a month ago. I feel so emotional about him. It comes with the territory. For some reason, some more than others get you, talk to your soul, interrelate with interior issues. I have told Stevie so many times in the last few weeks how loved he is, how special he is, how many people remember and love him from Sancuary One, that he probably does internal eye rolls. I tell him I'll do my best until I can't. Usually I do that without tears-but for some reason my conversations with him are more emotional.I'll explore that later, but for now, I'm just trying to keep this old soldier safe and on his feet.

If you come to Pie Day, it will be a special one for Stevie. It just might be his last and even though that is sad, when you think about where he as 6 years ago, and how he ended up giving kisses in his final months...well, that is pretty beautiful.

We vet and care for our animals no matter what it takes, but you can help us support Stevie and the other Misfits with donations for rewards or subscriptions. 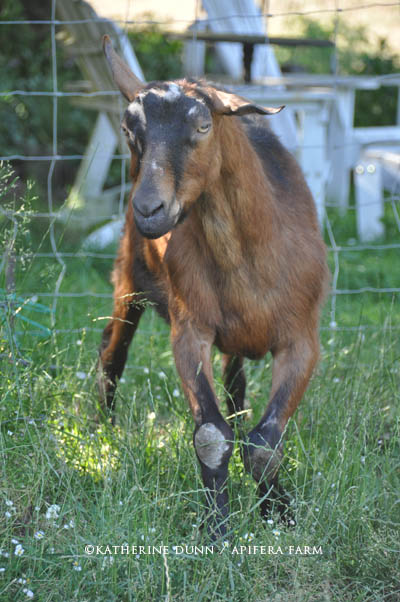 Posted by Katherine Dunn/Apifera Farm at 10:48 AM

I'm so glad for Stevie--and you! Thank you for being so patient, observant, and caring.

So glad Stevie is happy in the orchard. It's the little things with the old ones that really make a difference. Philo our 14 year old lab mix doesn't want to walk so much as he want to eat, so we take shorter walks and he eats more biscuits to keep his weight on. He's happy and I'm happy he's happy. xox

Seems like the Orchard is exactly the place where Stevie feels at home. Everyone needs their special spot. xxx's to you and Stevie.

kisses (& lots of them) to Stevie
from the gang at Black St.
xoxoxox

You are a sweetie and so is Stevie.

Such beautiful sentiment for such a "stoic soldier".
Kari

Thanks everyone. I think the new reality i he will always have times when he falls over, as he did again about 8pm. He has trouble finding a comfortable laying position, and then sometimes just kind of rolls over and cn't right himself. He mde it through the night though and was up and around this morning. So my nights are now restless.

Beautiful story about Stevie. Made me tear up a little. So glad he has the home and care he so deserves.