Clearing the desk and owl droppings 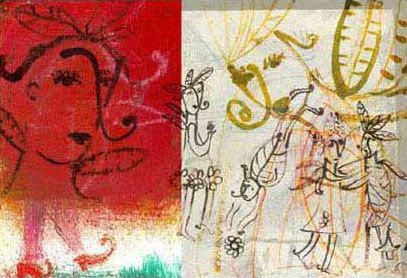 The holiday distractions are over. I can think about what I did, accomplished, and want to yet accomplish. It is a hopeful time. I've come a long way since starting as a full time artist in '96, climbed out of the post 911 draught, re-invented myself a couple times along the way, moved many too many times, oh, got married in there and moved to a farm. Oh, raised some 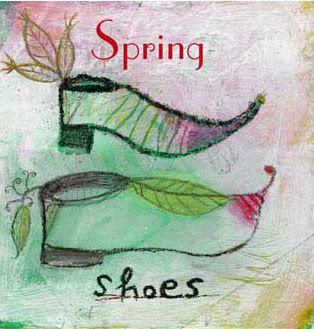 sheep...bought some goats and horses. It's a time to clean the painting table off that I happily pigify over the months. Time to create new promos - and as usual, I torment about what art director will respond to what, and I end up complicating my life by doing one for card/gift publishers,one for new general buyersand one for gallery intros. My little fairy promo of two years ago is one of my favorites. A tiny piece that folded up into a tiny envelope, describing how fairies are attracted to shiny red objects, especially shoes. It brought not a job, and it was so labor intensive I only mailed about 100. But it made me happy to look at and create. It's always the trick - keep marketing, don't get down when noone resonds - they might have liked it but have no idea how to use you as an artist - the story I get a lot. My style just isn't 'in' these days, I don't think it ever was, and I hope it never is. I hope I am just out there, get tot he right people, and those people respond to it and are emotionally charged by it and respect it.

So in between licking envelopes, I paint for myself right now - by looking at this initial rough of a new painting, you might think I am depressed. Oh, not so! I once heard my favorite guide Neil Young say that at some points in his life he publishes 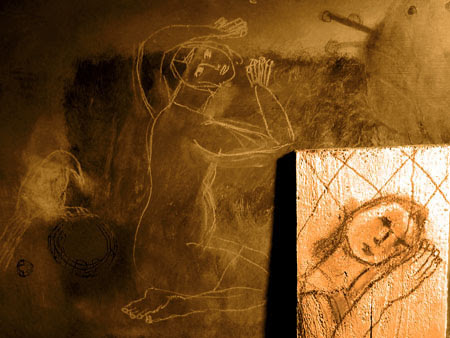 albums that have not been recieved as cutting edge or up to his caliber - and he said something like there are just times when as an artist you just don't want to share it all that inner stuff with the world, even though you have a lot on your mind and in your heart, so you put out something else that satifies you creatively, but isn't exposing your innards to the masses....I'm thinking that is what these things on my desk are about, and I have to work through them on my own before I talk about them even to myself...but I thought it was interesting to show that while I am working on these, I am excited to think about painting shoes for fun...

And today there are more owl droppings by the old barn - we've been graced by them, screech owls, but also very large ones and I have to look them up - It wasn't until I moved here that I learned from an area grade school teacher that you can cut open the droppings and see the tiny bones of what the owl ate whole. Fascinating to see. I am collecting some of the tiny bones and skulls. I don't know why, but they are just so miraculous, that tiny mouse has this elaborate little skelton just like us but it is teeny. Little femurs, little tibulas.
Posted by Katherine Dunn/Apifera Farm at 9:15 AM

I wonder if you would post the thing about fairies being attracted to things? I'd love to read it!